Out of Sync, missing 1 file. But it's on the ignore list so should be 100% Synced

Using Synctrazor on Win10 and the app on Android. Windows is Send-only, Android is receive only (for this particular share). I’ve got an ignore list setup on the Win10 machine which include *.zip (among a few other extensions) Synctrazor reports that the android device is 99% synced, with 1 item out of sync. It gives the filename, and it is indeed a .zip file. Everything else is in sync (as it should be). Just to dot my is and cross my ts, I copied the same ignore list over to the android device. Still out of sync. I used a file browser just to make sure the zip hadn’t synced earlier, but no, it’s not there. So these 2 devices should be 100% in sync, and are, but Synctrazor keeps telling me they’re not. I’ve restarted Syncthing on both devices, hoping getting it to restart, or rescan would clear things up, but no luck. How can I get Synctrazor to realize its job is done?

Here’s what I’m looking at: 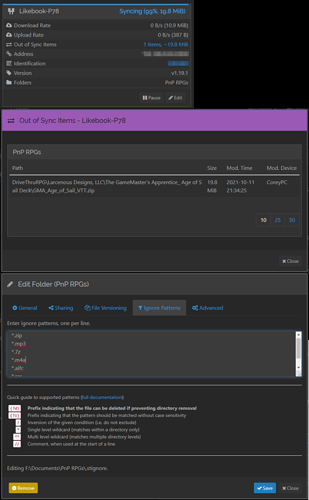 Are all of the screenshots from the same device?

Yeah, those are all from Synctrazor on the PC. The android device doesn’t report anything amiss.

The WebGUI on the Android says “Up to Date” It’s an ereader, and not as easy to take a screengrab of.

Suggest you remove the folder and add it back on android, see if that fixes it.

Ugh. It’s a big share. ~30gigs. All for a single 20mb file that doesn’t need to be synced anyway. Any less drastic ideas first?

You can try starting the desktop side with -reset-deltas command line switch.

@MrDowntempo, What @AudriusButkevicius meant is NOT that you remove the folder in a file explorer. Just to remove and add the folder in Syncthing on Android.

I removed the folder and re-added it. It took a very long time to scan. (The android is just an ereader and not very fast) Now it says out of sync on the Android instead of Up to Date

Sounds like the folder type is send only/receive only and there are modified files?

Is there an override changes button on either side?

No override button. And I switched both devices to send/receive to hopefully clear it up before setting it back. But synctrazor is still convinced that the Android is trying to sync (stuck at 99% with that 1 file). I am unsure how to tell synctrazor to restart Syncthing with a command line option, so I’ve not attempted using -reset-deltas yet

I guess touching the file should fix it, but I’m not sure why readding the folder did not.

I guess touching the file should fix it

Just for the record, a file can be “touched” in Windows by doing copy file.txt + from the command line.

What happens if you temporarily remove the file from the folder, and then re-add it?

I tried removing the file from the windows machine, but that had no effect. Still hung up at 99% on the Desktop PC. I noticed,however, that even after removing it, and adding it back later, the file mod time listed isn’t updated. It’s the same time/date listed in the screenshot. Maybe I should remove/re-add the folder on the Windows machine instead of the android and see if THAT clears it up?

Turns out no. At the end of that experiment, I get a red override button, but it didn’t resolve the issue and I’m back where I started.

Your explanation doesn’t have enough context to infer, but Syncthing can’t adjust mtime on android, so this might be expected.

I also figured out where to put -reset-deltas, but that didn’t resolve it either. And (as I understand it) the mtime isn’t from Android, as that file hasn’t been transfered to the Android, since it is on the ignored list. And in the screenshot next to the mtime it says CoreyPC which is the hostname of the PC. Touching/removing/etc that file has no effect though.

Found a couple very similar unresolved issues in the forums:

Out of Sync Items issues Support

I have syncthing installed on two devices and it seems a few hundred small files are not syncing. At least that what it says under “Remote Devices” >> “Out of sync items”. However, I think the files are indeed in sync. I have had this issue multiple times and I don’t know how to resolve it without removing the out of sync files. Any ideas? Is this a bug? Should I not worry about it?

How to clear out of sync items that are in ignore list? Support

Hi there, I am rather new and might have a weird setup, but anyway. I am syncing across several Linux/Windows dual boot systems plus an offline Windows system that gets a folder synced via a Linux that runs in vbox on top of it. One folder in addition gets synced with a cloud folder. Some folders only get synced between 2 systems, other get synced between 3 or 4. All ok so far, over 50000 files and 260GB in sync. Except 2. A Desktop.ini file and Thumbs.db. Both are in the ignore list. Well, they…

Was there ever a third device?