Out of Sync Items issues

I have syncthing installed on two devices and it seems a few hundred small files are not syncing. At least that what it says under “Remote Devices” >> “Out of sync items”. However, I think the files are indeed in sync. I have had this issue multiple times and I don’t know how to resolve it without removing the out of sync files. Any ideas? Is this a bug? Should I not worry about it?

Check the other side for the reason why its unable to sync them.

I have the same issue, all the time. Here are some example screen shots. First, on one computer, everything is “great”: 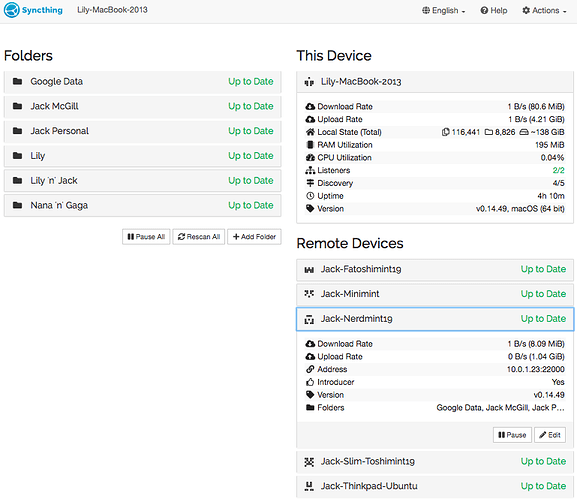 I will upload the other computer in a moment.

Here is the other computer: 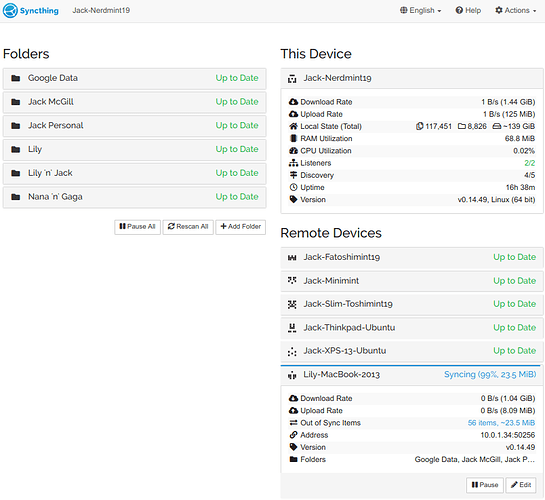 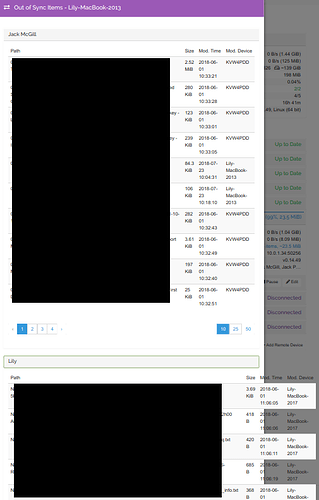 I see this kind of thing all the time, sometimes with folders in the file list (nothing in the size column, but otherwise similar). Never know how to fix it. It will stay locked like this indefinitely with little to no transfer.

Let me know if more info will help!

It seems its just ignored items on the macbook.

Yeah. The only ignore patterns that are used are **.DS_Store. It’s also seemingly random. If I remove / re-add a folder, I will get different outcomes. Here is if I remove-add “Jack McGill” on the Linux (Nerdmint19) side: 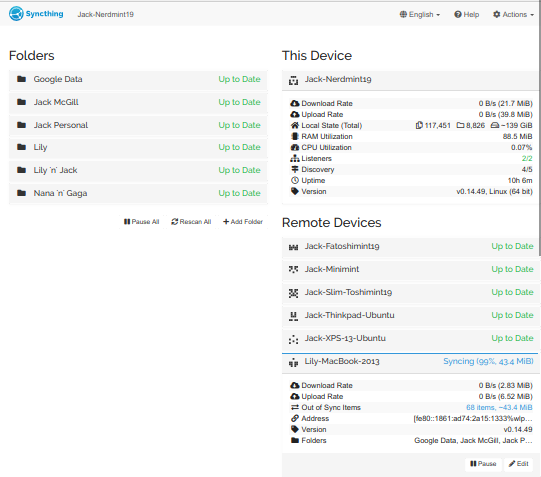 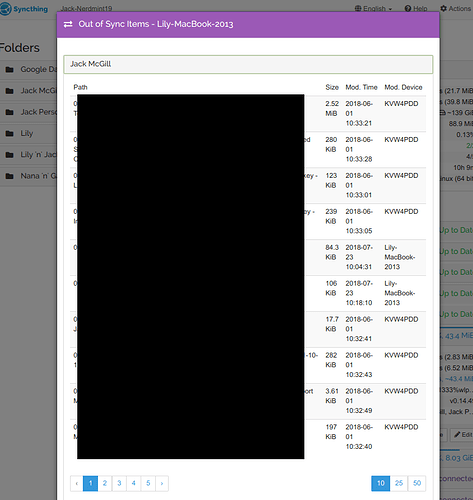 I’ll remove-add on the OSX side next…

Removing / adding the McGill folder on the OSX side initially caused a long scan (expected) followed by a sync that seemed to be taking way too long. When I restarted the computer, it quickly became “up to date” on both sides. I’ll try the same with the Lily folder.

Same behavior. Re-adding “Lily” on the macbook triggered a full rescan, then it hung at “Syncing (0%)”. Restarting within the GUI didn’t fix this, but restarting Syncthing-MacOSX (the all-in-one client) retriggered the sync, which quickly completed all 30 GB. Now everything up-to-date on both sides.

I’m not sure what the cause is of this, but I can say that the Lily folder was originally added yesterday to a clean Syncthing install at the same time as all the other folders. The usual GUI mayhem ensued, and may have been occasionally interrupted by computer restarts. Perhaps if scans are interrupted or multiple scans are happening over several hours this happens?

Maybe having a GUI button for “cleaning” a folder would be helpful to many users: the ideal action would be to remember the configuration / share profile, and then remove / re-add the folder, applying the old profile. It’s kind of a pain to remove / re-add, and then re-enter all the sync+versioning+ignores and other options. (I seem to do this a lot, as I’m often reinstalling OS’s / replacing hard drives these days.)

Note I still have a “stuck folder” issue which is not fixed by re-adding folders, and will eventually post that in either this or the other thread.

Perhaps is the wrapper that is misreporting the status. Have you checked the web ui?

Okay now you lost me on terminology. Are you suggesting I talk to the syncthing daemon through the command line or python via the REST interface?

Right, I thought you were using some UI wrapper. Can you post screenshots from both sides?

I’m confused. The screenshots I sent are directly from the built-in syncthing UI. I no longer use syncthing-gtk because of its incorrect information, and syncthing-macosx does not provide its own ui (just opens the browser).

Sure, given things have moved on, and a new version has been released, can you post a screenshot from both sides as it looks like now?

Sure. It actually now happened between two Ubuntu machines, so we can rule out OSX as the culprit.

Here are screenshots from each of the involved devices. Nerdmint19 is included because it was the “mod” device. 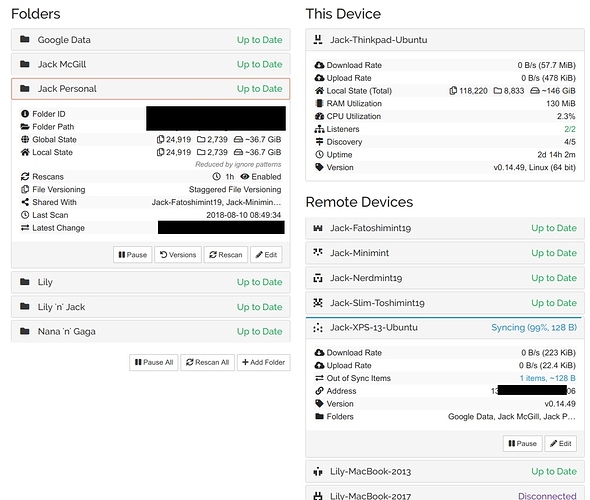 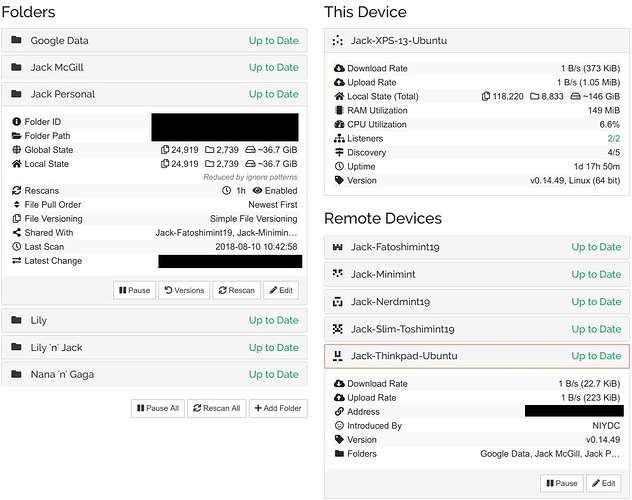 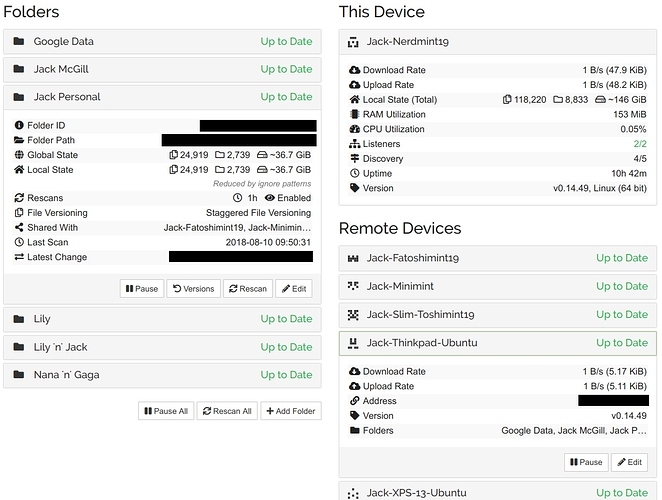 Folders show up to date but still syncing?