no connected device has the required version of this file

I’ve been using syncthing with great success for the better part of a year. Now I’ve run into a scenario that has me puzzled.

I think I went about the migration incorrectly. I copied all the folders from my 1TB to the new 2TB drive, then deleted all the st Folders from syncthing, and made a new sync Folder of the root on the master. Now, the problem I seem to have is that all the files/folders I copied over from the 1TB drive are failing to sync and report the following error: “no connected device has the required version of this file”

I think I probably did not go about the process correctly, but is there a way to get st to “see” the copied files/folders as the same ones that are on the master? What is the best course of action from here? Thanks!

If you are using sendonly, it would not download stuff from others, which implies sendreceive folder is having these issues. If that is the case there should be an override button visible on the sendonly sides UI.

Anyways, you can start from scratch, remove the folder from both devices and re-set it up.

Also Audrius seems to have understood your situation, I did not. Screenshots are always a good thing to start by giving an overview over your setup and experienced “symptoms”.

Thanks for the suggestions. I have both sides setup to send and receive so that both sides are identical (when syncing has finished).

Perhaps the problem will resolve itself once the “new” data that I did not previously have on my machine is downloaded from the master. Last night, there were 85k failed items; today there are 14k failed items.

Here are a few screenshots. Please pardon the censoring of sensitive info. 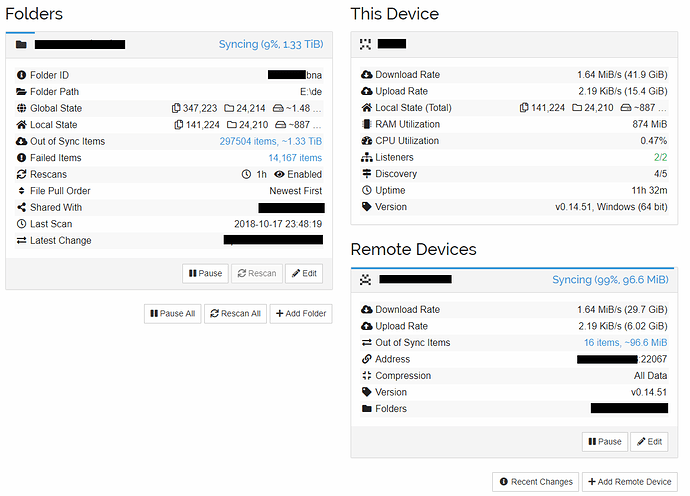 Perhaps I should be patient and wait for the syncing to complete? 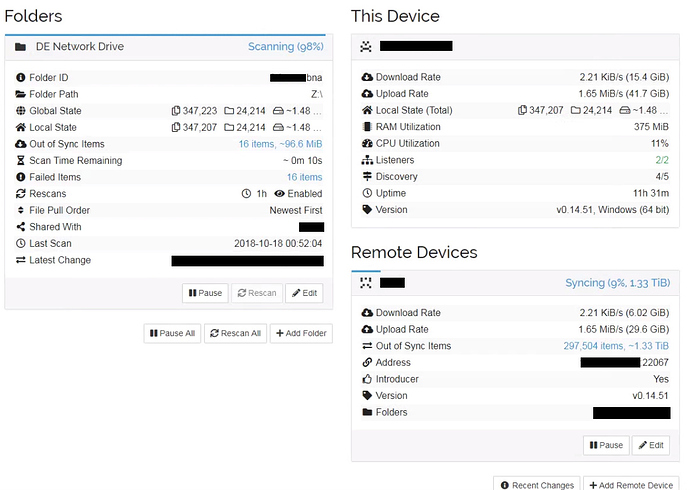 It’s definitely ugly that it shows failed items like this, but if it’s sync in progress I wouldn’t worry about it (yet) and wait. Initial sync of a lot of identical data is messy, even though I didn’t observe failed items myself before.

You should look into the failed items and fix the underlying cause tho.

The error is “no connected device has the required version of this file”, not really something a user can fix. I assume this is something racy in the presence of very slow pull -> scan -> pull cycles on first sync.

I don’t want to believe its that on all of them. How would all of yhe files change at once?

I was thinking of some combination of metadata only changes/conflicts which causes it, but then the error would be the “peers went away…” one. So yeah, no idea.

Well, I’m embarrassed to admit that my patience was the culprit. All “no connected…” files have resolved themselves and are syncing correctly. I’m still downloading the new data, on a slow connection, but ST must have made its way around to the 85k files that were failing and determined there was a match.

My apologies for the fire drill! Your discussions of the inner-workings perhaps indicate that there was something interesting happening with the behavior nonetheless? Anyway, thank you for the support!

Oh, one last clue. Perhaps it is significant that the master computer that I’m syncing from is about 10 years old and slow to perform scan operations. This may have been why after a day or so, the status on the 85k failed items hadn’t budged.

On a side note, the “scan on change” update vs the periodic scanning really helped a lot with performance on that old machine!