What is Syncthing telling me in these screens?

I am using sync thing to file shadow the files from a PC to a NAS. The Nas is a dlink running Alt-f firmware and latest syncthing. PC is windows XP running last capable version of syncthing. Set up as one way (sending and receiving respectively) only 1 folder (%os\default) with exclusions. Total folder size is about 69Gb. a21m = folder being “shared” fordnas = 2TB nas running sync thing.

The shadow was started as new destination folder on nas. No files on NAS ever changed, only when copied from PC

I’ve run it for several weeks, and can’t make sense of the webgui on each device when compared.

I am certain the process is working, using TCPview i can confirm IP packets are going between the devices on the network.

I know the destination is very processor and resource constrained, so i expected it to take a VERY long time to complete inital sync. I also have tried running syncthing at night on the PC when no other programs are running.

I would expect that eventually, the NAS GUI “Folders” will indicate “Synced” and the “out of sync items” and “Locally changed items” should both be zero.

but that doesn’t seem to be happening.

Maybe i’m not understanding how this is supposed to work, or what the guis are telling me. Any insight from an experienced user would be truly appreciated. Thank you

The first picture is the webgui on the NAS: 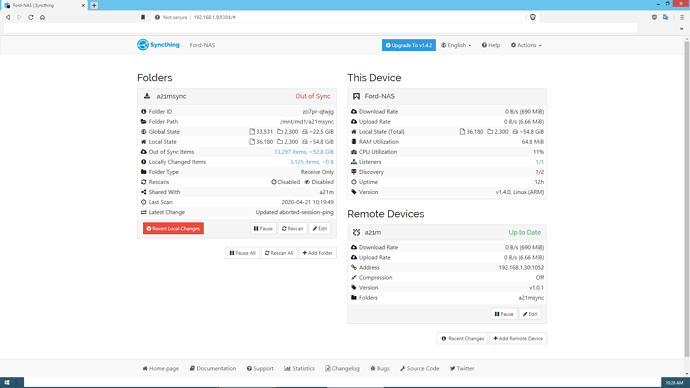 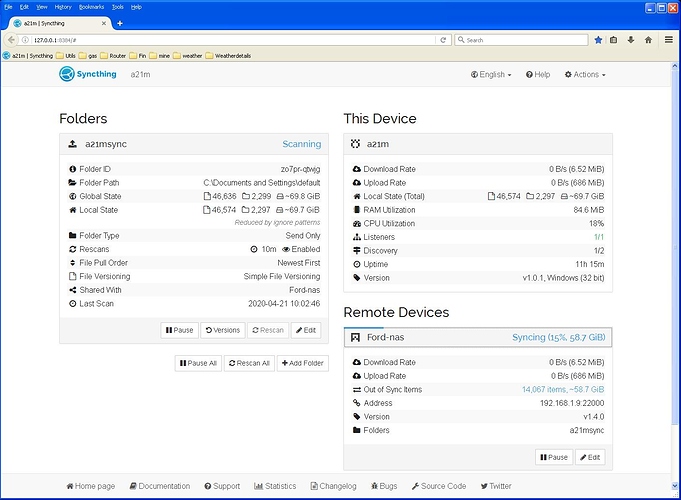 syncthing_source1404×1030 140 KB
These images were captured almost concurently.
What is syncthing telling me in these screens part 2
AudriusButkevicius (Audrius Butkevicius) April 23, 2020, 7:47am #2

Locally changed files means the NAS modified the files after it downloaded them and is now out of sync because it’s receive only and will not send it’s changes back.

The other side is scanning, which means it’s still going through the local files.

Is it normal to expect a NAS to change files? There is no other source of files, and the NAS though available in the network, this folder tree is exclusive to the source computer syncthing instance.

I did check logs, and they were essentially empty. (nothing remarkable).

Is it possible that a version mismatch between the source syncthing and destination (NAS) syncthing could be involved?

Should I purge all data from the NAS folders and restart the entire process? You advice is truly appreciated, as is your dedication to creating and developing this great application.

Is it normal to expect a NAS to change files?

No and yes: I wouldn’t expect it, but it did happen and NAS often have various functionality that should help in some way but can also result in unexpected behaviour. So we usually ask about it.

Is it possible that a version mismatch between the source syncthing and destination (NAS) syncthing could be involved?

Shouldn’t be, but possible. unless you have a specific reason, it’s advisable to upgrade to the latest stable version always (1.0.1 is quite old by now and bugs have been fixed).

Should I purge all data from the NAS folders and restart the entire process?

No!
the process is still ongoing (scanning on one and out of sync on the other side). so step one wait for that to finish, step two check the end state and then step 3 decide on further steps

Ah and at any point you’d like, preferably early: upgrade.