Some problems with syncthing

Unfortunately I have four problems with syncthing.

The setup is as follows: Several machines (one Windows and several Linux machines) as a client sync to a Linux based syncthing server. The clients are all configured as write only and the server is configured as read only. The clients each sync one or more directories to the server.

I only skimmed your text and there’s already enough elements and steps to get my head spinning. Could you please post some screenshots of key situations to make them easier to grasp.

Sorry about being too complicated! Sure I could add some screenshots, dumb me not thinking of that right from the start!

Concerning the first problem:
The first screenshot shows that 7 elements not synchronized: 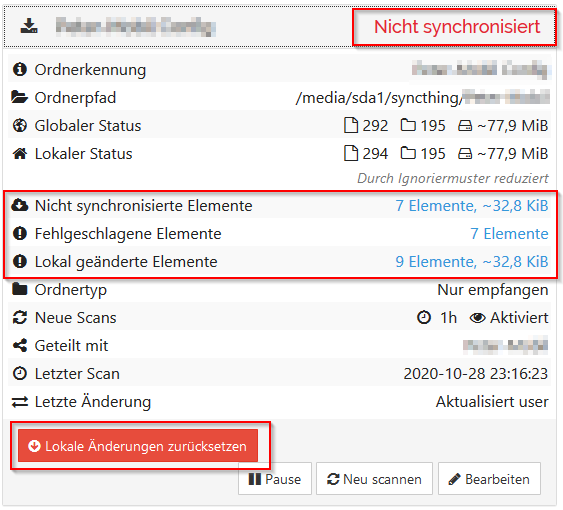 
The second screenshot shows the details: 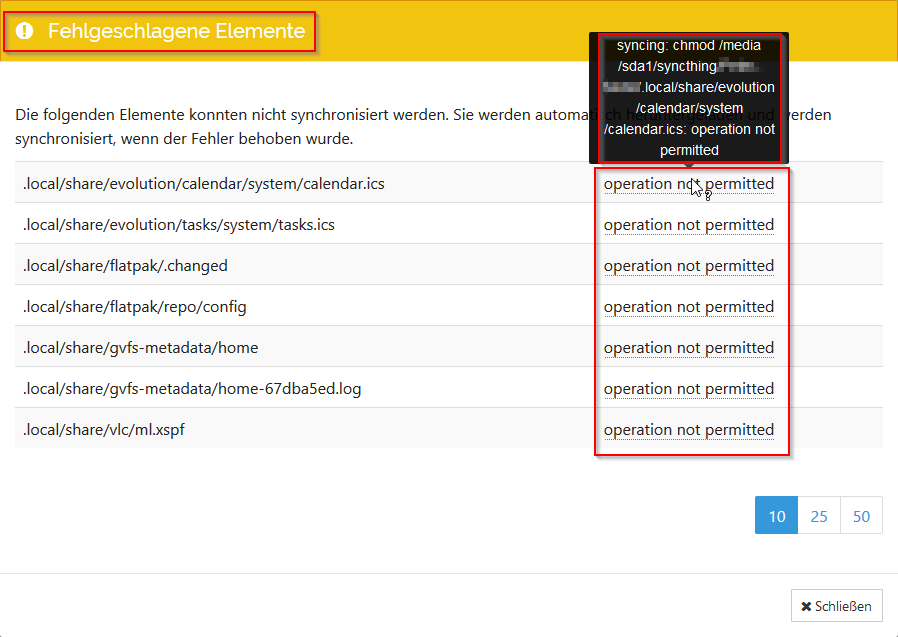 
The third picture shows a screenshot from MC on the sender, showing that read permission is set for everyone, nevertheless this is not sufficient for syncthing to read the files. It is a user folder, so owner and group are set to that user: 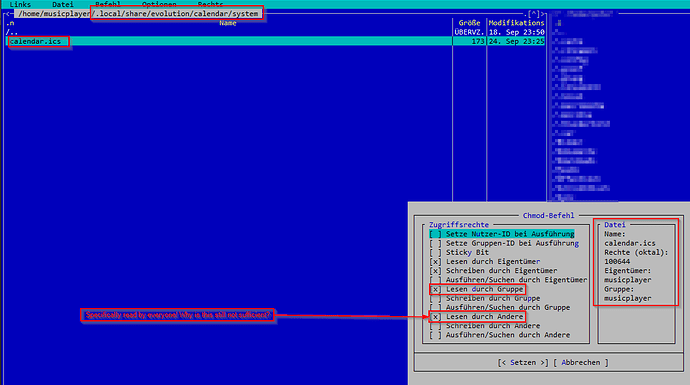 
Concerning the second problem, the forth screenshots shows the situation on the sender: 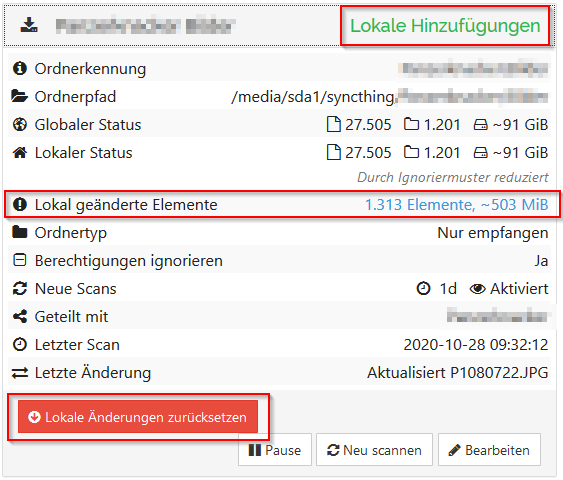 Concerning the third problem, the screenshot shows an empty list but 17 items should be shown: 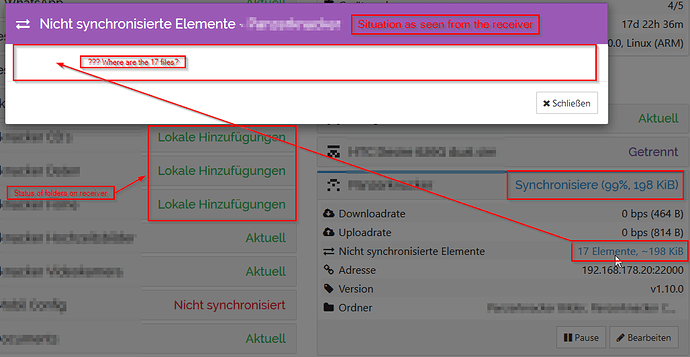 
The screenshot also shows the situation on the receiver. Consider the state of the folders (“local additions”) and the number and size of elements (17 elements, summing up to 198 KiB). Compare that to the same situation on the sender in the screenshot below. The folder state now is “Current” and 3528 elements summing up to 1.89 GiB. How come the display is different on sender and receiver? 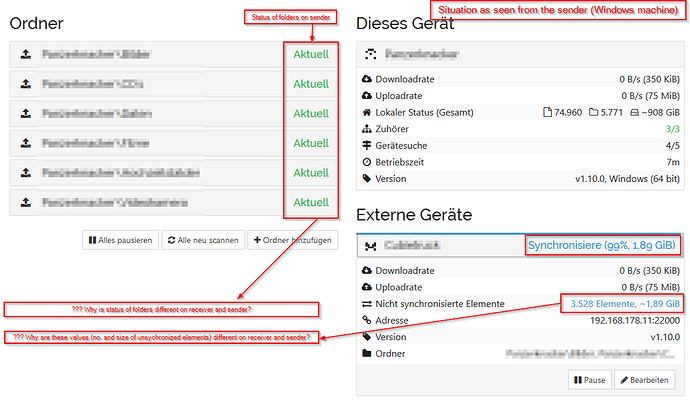 Also the screenshot shows sychronization stalls at 99% and it never finishes.

Please also explain, which type of devices you use. It seems you have a Linux and a Android system in use. Are all peers are connected to all the devices?

That indeed makes it clearer

First problem: It fails to change permissions, meaning the user Syncthing is running as doesn’t have sufficient permission to do so. Probably it’s not the owner of the file. You either need to sort that out at in your system, or ignore permissions in Syncthing.

Third problem: A bug that can cause that is fixed in v1.11.0, so lets see if it goes away for you after the upgrade. It’s only a cosmetic problem, sync still works.

That would be my first test.

You are right, it’s a mixture of Windows, Linux and Android devices.

The setup is as follows:
The Windows, Linux and Android devices have no knowledge about each other. They only sync one or more folders of their local disk via syncthing to system running under Linux. All systems (the senders) are configured as “send only”, only the one Linux system mentioned last is configured as “read only” (the receiver). A nightly hardlink backup is drawn via dirvish/rsync on the receiver machine.
So except that meanwhile a lot of machines are involved the setup is very simple, all machines that have “something to backup” do a one-way sync of their important folders to one machine that offers a syncthing service. The folders don’t overlap (means only the originating machine and the server know of it, no other machine). This results (or at least should result) in a 1:1 copy of all folders on the server. As said, each night a hardlink backup is pulled of the complete syncthing folder. So I get some time machine like behaviour. The nice things are that it’s fully automated and that clients can connect locally or over the internet, so road warrior’s machines are also backed up without a gap.

Syncthing doesn’t sync onwership. It does however sync permissions (which is enabled by default), and if they are different, which they do seem to be in this case, it needs to own the files to change the permissions.

After I took a look today it again said “local additions” like it did before!

@imsodin, did you see anything that explains this in the logfile I attached? Did the database get corrupt somehow and I should delete the db-files as a last measure? syncthing has been in continuous operation on that system for quite some time, since January 2016. I think this was with V0.14 or even earlier of syncthing and it naturally has gone through several changes of the db format.

I haven’t looked at the log because you said it’s working. That said it isn’t a Syncthing log at all, it’s a log of the leveldb. And to the general question: I don’t see any reason at this point to assume any of the behaviour you describe is due to db corruption.

Anyway if “local additions” reappears, this means the files were changed locally. Check what is different on the two devices (diff and ls -l will do that). If they really aren’t different at all, we’ll take it from there.