[SOLVED] Syncthing stuck, GUI seemingly responsive, but nothing is happening

I have experienced this very strange issue today. Basically, Syncthing was stuck for about ~30 minutes on one device. The GUI showed two folders being scanned, and the other device was shown as connected, but nothing was happening in reality. Then, after some time had passed, Syncthing suddenly resumed its activity.

I tried enabling db and model logs, but nothing was being written to the log even after doing so. Also, when trying to pause the other device, the GUI did change its state to paused, but if I tried to unpause the device again, then it immediately showed the device as connected, without actually going into the disconnected state. At the same time, the stuck device was being reported as disconnected on the other side.

The synchronisation has come back to normal right now, but I did take http://localhost:9090/debug/pprof when the device was still stuck. I would be very thankful if you can have a look at it and check whether there is anything useful there.

Database GC
Devices mark each other as connected and disconnected at the same time
imsodin (Simon) May 20, 2021, 9:46pm #2

That’s not a profile, but a goroutine dump. There’s a connection waiting a long time for closing. Can’t make sense of the line numbers though - what version is this?

That’s not a profile, but a goroutine dump.

That’s what it is… Do you mean that I should have taken https://docs.syncthing.net/users/profiling.html instead?

what version is this? 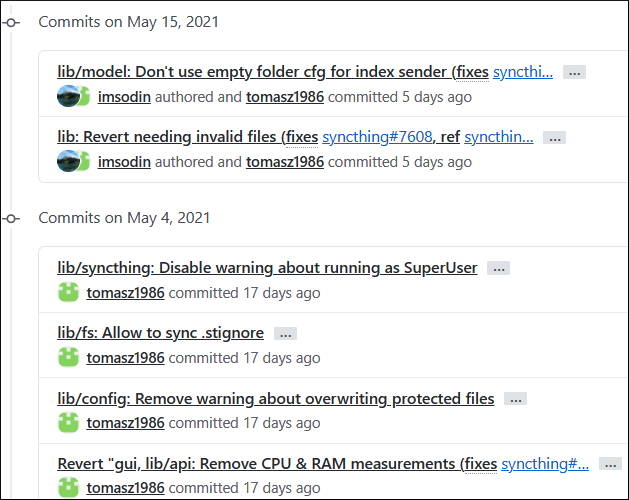 That’s not a profile, but a goroutine dump.

That’s what it is… Do you mean that I should have taken https://docs.syncthing.net/users/profiling.html instead?

what version is this?

There’s a connection waiting a long time for closing.

Hmm, there are only two devices involved here - XZZTDIY and D4DZUGP. The former is connected only to the latter, and it is the one that is stuck, and also from where the dump comes from. The latter is connected to multiple devices, but there everything has been working smoothly.

This is how the situation on XZZTDIY generally looks like. 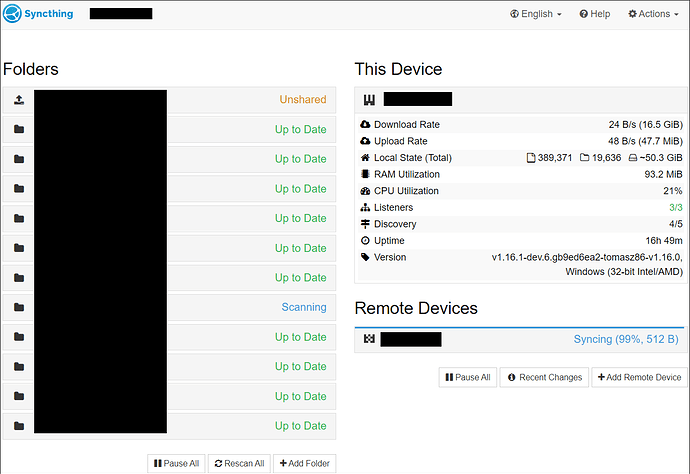 As you can see, not that much is going on really. Also, the two devices are located on the same (W)LAN with decent speeds and no bandwidth limits. They also connect directly by IP addresses in Syncthing.

I just stopped looking at the goroutines too quickly when the line numbers didn’t make sense: The cause is compaction at the end of the database garbage cleaner holding up an index update, which prevents the connection to close and through holding model locks, stalls everything. It’s waiting since 21min for the compaction to finish. Is this a specially slow db (large, on harddisk, …)?

That’s what it is… Do you mean that I should have taken Profiling — Syncthing v1 documentation instead?

I just skimmed and noticed “pprof”, expected a .pprof and did get a goroutine dump. I am still confused about what you did - I am not aware that we are running some pprof thing at 9090. Not that it matters much, the goroutine dump is useful.

Is this a specially slow db (large, on harddisk, …)?

Not really… The DB takes about 500 MB on the disk, and the storage itself is eMMC flash storage. Not the fastest in the world, but definitely not the slowest either.

Also, nothing else was really going on on the machine at that time, except for having the Web GUI open remotely on a different computer. Can the CPU be the culprit here? It is rather weak (Intel Atom Z3740), but not that slow either…

Edit: The compaction seems to be occurring again at the very moment, because the GUI is stalled in the same way, and the DB has grown to 700+ MB, and now is shrinking again. However, the CPU is only being used in about 10-15%.

Thanks for the analysis regardless, and it is good to know that the stall was due to a normal operation, and not something unusual.

I am still confused about what you did - I am not aware that we are running some pprof thing at 9090.

If there is a better way to do debugging in such a case, please let me know

I don’t expect GC is doing that much (unless you have an enormous amount of synced changes every day), however there’s no way to find out right now. I added some logging regarding that in the following PR - can you run with that and report the lines mentioning “Database GC” please: https://github.com/syncthing/syncthing/pull/770

If there is a better way to do debugging in such a case, please let me know

All good, I just genuinely wasn’t aware/forgot about STPROFILER - thanks for explaining

I don’t expect GC is doing that much (unless you have an enormous amount of synced changes every day),

How much would that be? I have a at least a few hundred MBs changed per day, but those are mostly the same files being modified over and over.

From time to time there may also be a mass change of tens of thousands of tiny files (e.g. 50,000), but they all together take a dozen of MBs maximum. Does the number of changed files matter regarding GC, or only the size?

I wasn’t thinking of any specific number, I just assumed you wouldn’t be changing a big fraction of all the files daily. And I just shouldn’t have assumed anything and asked you how much changed

There are two things that can create work for GC: Any change if more than 10 devices have previously changed a file. Any change to a file with more than 3 blocks, so most files >386kB (not all due to variable block sizes).

How much it really is for you the added logging can tell. What I am interested in is, if the churn on db compaction also happens if GC deleted only few items. If that is the case, it would likely make sense to have a threshold below which no compaction is triggered.

I have cherry-picked the commit, so let’s see what exactly is going on. I will come back later once there is enough data in the logs. Do I need to enable any specific debug logging for this?

There are two things that can create work for GC: Any change if more than 10 devices have previously changed a file. Any change to a file with more than 3 blocks, so most files >386kB (not all due to variable block sizes).

There are fewer than 10 devices in this configuration total, so it would likely be the second case here.

No debug logging needed - if GC takes more than 10s, it will log at info level.

Today I turned on a different computer after about 2 weeks of not using it, and Syncthing immediately started doing GC (which took 30 minutes or so…), even though there was no Internet connection even (i.e. there had been no file changes in between, neither local nor remote).

Unfortunately that machine wasn’t running the binary with the cherry-picked commit, so I cannot give any more information here, but I just wanted to ask, would starting Syncthing after a long period of inactivity also trigger GC?

That’s expected: GC is run periodically (every 13h by default), and last run time is stored. So starting up a device after longer than that will trigger GC immediately.

I am really interested in getting your stats to get a bit more of an idea on how long this process takes in different situations.

This is a log from today, from the affected device described originally in this thread.

The GC took 34 minutes… The device itself was completely idle at that time, so there was nothing else going on in the OS that could have negative effects on the process. For the record, the antivirus is also turned off there.

Here is another log from a desktop PC. This is the fastest computer that I have currently access to.

What is the db stored on? I’d expect this to be entirely limited by disk IO.

The first log is from the eMMC storage mentioned in https://forum.syncthing.net/t/syncthing-stuck-gui-seemingly-responsive-but-nothing-is-happening/16828/6.

Is there any way to force GC manually? If yes, then I could try moving the DB to a RAM disk on the very same device, and then test how long it takes to do it there.

The device is slow, but not that slow…

Based on the logs, it takes 34m to process 671 blocks on Device 1, and just 2m to process 1500 blocks on Device 2. The difference in storage speed between the two is not that drastic though. Device 1 has the eMMC storage benchmarked previously, while Device 2 uses a standard, mid-range SATA SSD.

The difference in CPU power between the two is massive though, and I have a feeling that something may be up right here. The CPU wasn’t used that much when I was checking previously, but it was only the multi-core load. On the other hand, its single-core performance is very weak. Are database operations single-threaded by any chance?

I may try increasing the interval regardless. I would say that another aspect worth paying attention to regarding this issue is that there is no indication in the GUI that something is taking place in the background. In fact, the GUI acts as if it was responding to commands, etc. while in reality it is not, which may lead to confusion, e.g. the user changes some settings, and they don’t get saved until much later.

It’s not really the blocks being processed, but every item announced by any device. So the effort scales to that, not the reported blocks/versions. The blocks/versions are a result of loading each and every item and looking at them . This is indeed a single threaded process.

There is only one device connected in this case (see https://forum.syncthing.net/t/syncthing-stuck-gui-seemingly-responsive-but-nothing-is-happening/16828/4), so the situation shouldn’t be that bad, I guess, although if the process is indeed single-threaded, then this only makes me suspect the slow Atom CPU being the culprit even more.

Will delaying GC have any serious impact on performance, or will it only affect the size of the DB?