I’ve been running into this issue when I create a new folder for syncing. Here’s what I did:

But then I received these error messages:

I tried the following to remedy the issue, but to no avail:

None of the above worked. Currently the permissions are set to: drwxrwxrwx+ 1 USER sc-syncthing

OK I think I answered my own question! But posting the solution here in case anyone else has this issue…

When adding a new folder to Syncthing, make sure the sc-syncthing group has permission to write to that shared folder on the Synology NAS.

Go to Control Panel > Group and select sc-syncthing. Then click Edit. Go to the Permissions tab in the next window and make sure the Read/Write checkbox is checked for any top-level shared folder that are being used for Syncthing. 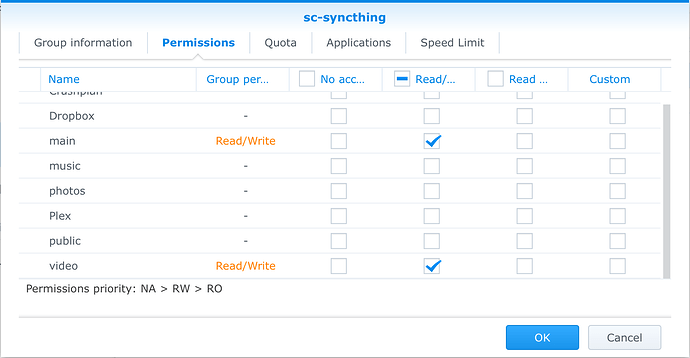 That did it for me.