Many people are wanting to use their OG Pixel as a destination for their photos to preserve unlimited Google Photos. I think it would be useful to have specific instructions for this use case. I have it kind of working but am getting strange Android-Android sync issues. I’ll try to update here.

On each source Android phone (phone that will have photos to sync):

On each source Android phone (phone that will have photos to sync):

On the OG Pixel, you should get a notification that the source Android phone wants to share a folder. When this happens, on the OG Pixel:

How’d you make out with this project? Following you down a similar path.

Have you seen this guide?

I have seen it, but I’m not really sure what to think of it. It describes in detail how to set up Syncthing-Fork on the Android’s side, but mentions nothing about how to set it on the remote device (desktop PC, server, etc.), and also on how to connect the two with one another.

The title is a clickbait though. There is no unlimited storage with Syncthing

. It all depends on your hardware and how much disk space you have available. 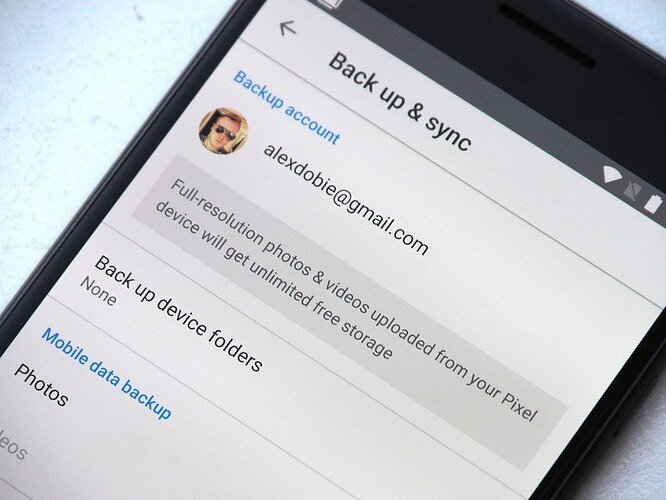 With the Pixel and Pixel XL, you can store unlimited photos and videos (in 4K!) at full resolution and not have it counted against your quota. Here's how photo backups work on the Pixel.

I would like to bump this topic. I am trying to follow in your footsteps. It seems doable. I have Google Photos configured to backup photos in my Downloads folder on the Pixel. Now I just need to get SyncThing to transfer the photos from my other phone to the Pixel into the Downloads folder. I was stuck on this a while, because Google Photos is smart. It won’t allow you to add a folder to those to back up, until it has a photo in that folder that Google hasn’t backed up yet. It would be nice to have a finished tutorial here so it was easier to do for everyone.