I guess this is a bug, but I wanted to discuss this here first (maybe it’s not, maybe it’s already fixed…).

Usually, when I add files in a send-receive machine, the send-only machine goes out-of-sync, because it does not accept changes from a remote device. It then presents the “Override changes” button to enforce it’s view of the world to others.

This was the case up to and including version 1.8.0.

This is what the device with send-only folders shows: 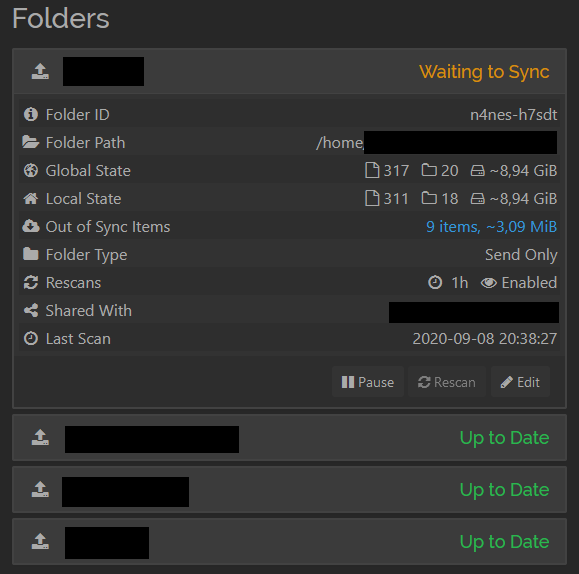 The 9 out of sync items are precisely the items that I’ve added (or changed) on a remote device. They cannot be synced, because the folder is send-only. It’s just unexpected that the folder is on waiting to sync instead of out of sync.

That already came up here: waiting to sync / 95%, 0B (again)
And was (inadvertently) already fixed by https://github.com/syncthing/syncthing/pull/6951

As a workaround you can pause and unpause the folder to get it into idle again (which is ugly I know, but I don’t think there’s another way).

The RC with the fix will be out soon.

Ah okay, I missed that, sorry for the noise.

However the workaround doesn’t seem to really work. Pressing pause then unpause seems to work briefly (for a split second), but then the folder flips back to the old “Waiting to sync”.

Anyway, it’s not a big issue, so no worries.

Ah sorry, didn’t mean to say that you should have found that, just trying to link stuff together.

Actually now that you say it that’s expected: When you unpause it triggers a scan which gets it back into the incorrect waiting to sync status. You’d probably have to use the API to override (or adjust GUI code to e.g. ignore waiting to sync and thus make the override button appear).