My configuration includes 3 devices - one always on device (server) and two desktops. Three of my folders are stuck scanning across my devices or report out of sync, even though no files have changed. At least one of my folders is working normally. Scanning behavior on all folders was fine before 0.14.3. At one point, I think one of my devices finished scanning all its folders, but as another device came online, it reset the sync and started the entire scan over again.

I would like to include logs or screenshots, but not sure what would be of help.

Logs and screenshots would be useful, also spec of the machines involved, and file counts and sizes of folders in question.

Attached is a screenshot and logfile from one of my machines.

The scan percentage hasn’t budged on the remote device (pine64) and there isn’t any data going in either direction. 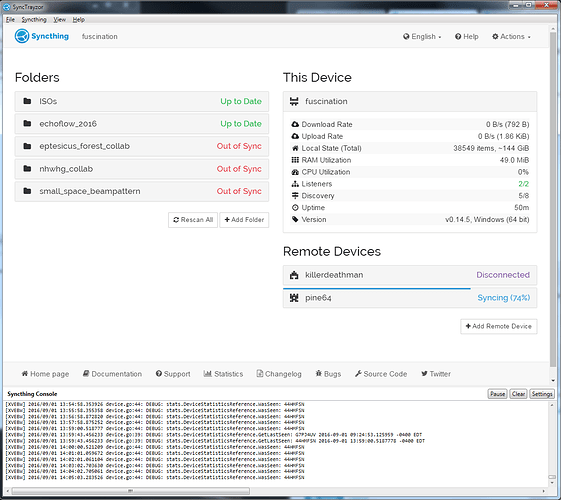 Is one side or other set to be “master”?

(It’s not scanning, it’s just not syncing either because it can’t due to some error or the files are on the disconnected device, or because it’s set to master.)

None of my devices are set to master on those folders.

The “server” side runs linux - I could send those logs too if that would be helpful, but I haven’t enabled any of the debugging in those logs and would need help to figure out how to send those logs (I use a systemd service).

Nothing looks loke scanning. They are just out of sync. If you expand the out of sync folder you will either see failed items or out of sync row, which when clicked on will show whats actually happening.

Yea, that’s a recent development. Strange this is that nothing has changed in those folders. I haven’t touched them in weeks in fact. Should I just manually do a rescan on them?

No, you should check for failed or out of sync items.

It’s thousands of items long - I can’t tell why it would be saying they’ve changed when I haven’t done anything to them.

Well it might just be metadata, but it also might be content. Given it’s not showing percentages of completion, I suspect it shows thousands of items in the failed items list. It should also show the error related to the item in that case.

With my other desktop and server connection, I get many out of sync items as well (in the thousands), but it seems to be overwriting them on the server. I usually only have one desktop on at a time, with the server on all the time. I can log what happens if I have both desktops on at once. Which debug options should I turn on?

I should also note that the second desktop device does not report “out of sync”. It had a very long re-scan time which I allowed to complete overnight, and it’s still working on. 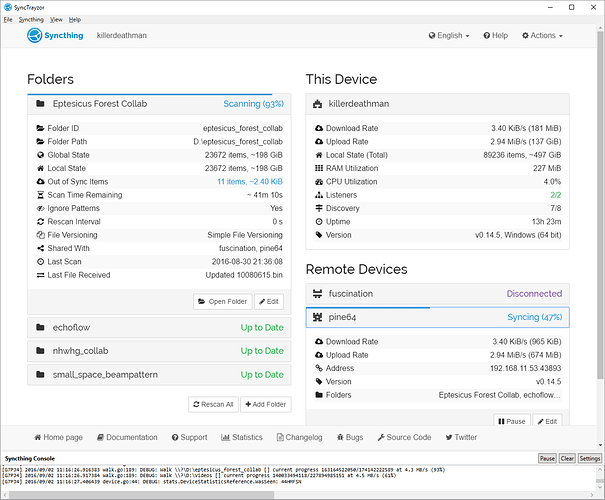 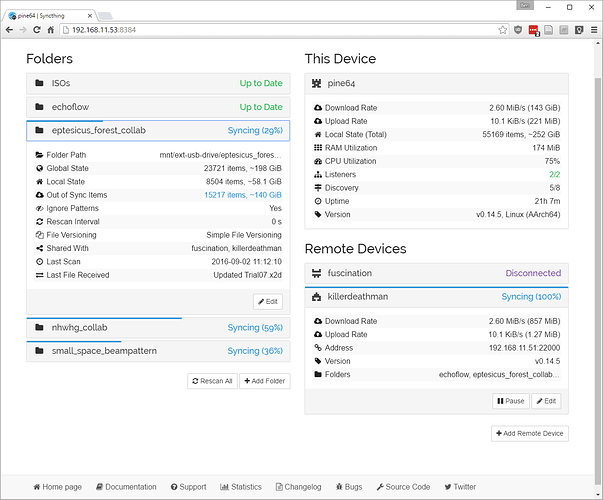 Everything looks fine from the screenshots?

So no explanation as to why it suddenly needed to sync all these files? Like I said, I haven’t made any changes.

Well click on the underlined text to see what it’s doing. Have you actually verified md5 sums to prove that the files are the same?

I haven’t confirmed MD5’s are different. I will do so now. In the meantime, here are logs from the two desktops - at the moment it seems to be resyncing the entire folders by downloading almost everything inside.

Also, triple check the path, as it feels you’ve mistyped something and it’s redownloading everything into a different directory.

If I look in the /.stversions folder, all the missing files are accounted for. File creation dates are old though - perhaps the original file creation dates, so I’m not sure when this happened.

It’s like at some point one of the devices deleted everything in the folder and that propagated to the other devices. This would have been within the last week or so - as everything had been working fine before that.

The paths are all correct - and none of the paths have been modified recently.

At this point, I suppose all there is to do is to wait and hope that this doesn’t happen again.

you could add the .stversions folder to syncthing but not share it with any device, like this it will scan the files in there and copy existing files. Depending on how fast that device is this could save you quite some time.