I am trying to determine if Syncthing will meet my needs. I have not found any instructions that match my particular scenario. I have a Synology NAS running DSM 5.2 and 3 PCs running Ubuntu Linux 14.04. I want to sync a single NAS folder across multiple PCs and multiple users.

Utilizing Syncthing, how can I sync this NAS folder with the following 2 users on three different PCs running Ubuntu Linux 14.04:

NOTE: Each person has their own userID on the PCs and don’t share a single userID.

Can Syncthing accomplish this, and if so, can someone please instruct me how to do it.

Syncthing will use whatever user it’s running under, which means you can only run only as one user at a time, unless you run two copies, or play around with permissions.

Thanks for your reply, Audrius. Running only as one user at a time is not what I was hoping for. However, running multiple copies sounds promising. How would I go about doing this?

Just change the listen port and the web ui port in the settings, and then launch a second instance with a different home path (-home arg)

Just my 2cents… I had a setup similar what you wish to achieve in the past over a “public” workstation. We used to ran a 3rd user called IT (autologin on boot in background, so you still need password to access this account) that was mainly executing everything we needed to sync files, malware scan…

So the user IT was syncing to the local drive N:\ where all other signed in users had access to work with files.

Thanks for your replies, guys. I installed two instances of Syncthing on a PC, and another instance on a Synology NAS. The first instance synced right up with the NAS, but the second instance will not. Have not been able to determine what is wrong. I have uninstalled and reinstalled twice with the same result. Any ideas?

My oracle can’t see what error message you are seeing, or the log output, nor what the definition of ‘doesn’t work’ is.

My sincere apologies, Audrius. Guess I had better give some background so everyone will know what they are dealing with. I am fairly new to Linux. I recently retired from a career where I spent all of my time in either mainframes or Windows. I liked the concept of open source and so I made the switch to Ubuntu. I am not very familiar with the inner workings of Linux or any of the Linux apps. In other words, I am definitely not a Linux techie. My preference is an easy user experience without having to know how everything works. All that being said, here are my observations. I don’t receive an error message. The only thing I see is a status of disconnected. I don’t know where the log is but will be glad to check it out when I find out where it is. I am attempting to upload a screenshot taken of the Syncthing GUI on the NAS. Please bear with me, your assistance is greatly appreciated. It would definitely be easier just to go with something like SpiderOak, but as I said, I like the open source concept. 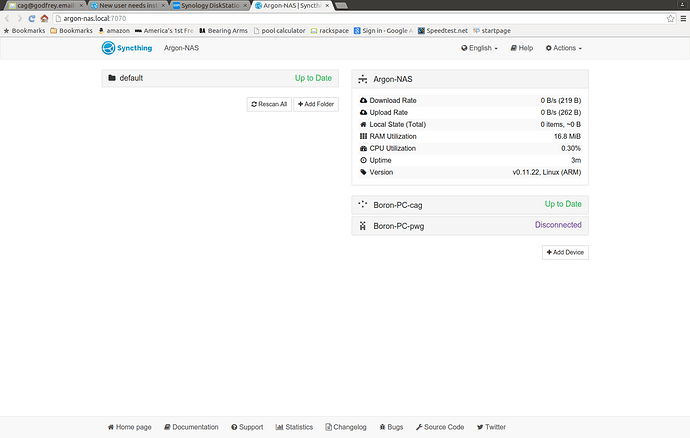 The fact that you don’t have a mention of global discovery in the “Argon-NAS” section leads me to believe that global discovery has been disabled. You should probably enable that, unless you’re using DNS or static IP:s to connect your things.

You are correct. I am not using Global Discovery as I had hoped to restrict this to my own home network. I am also uploading a screen shot of the Syncthing GUI from one of my PC users. 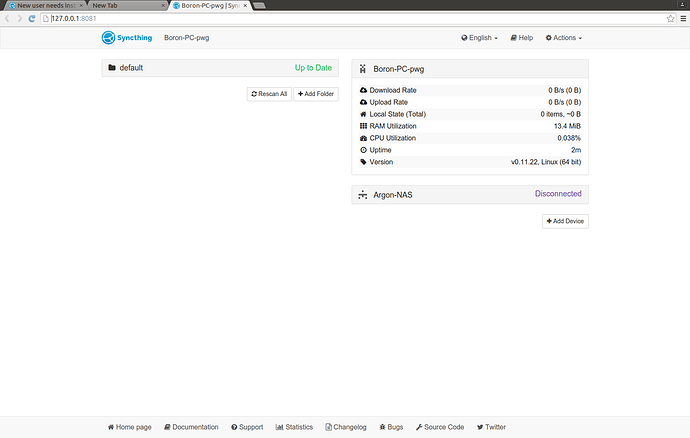 BTW, I am not using static IP:s, and I don’t have my own DNS server.

Then you need to make sure that local discovery is working, permitted by any local firewalls on the PCs, and that the PCs are on the same LAN.

Not really sure how to determine if local discovery is working. I think it is because the other user on the same PC is working. Attached is a screenshot. 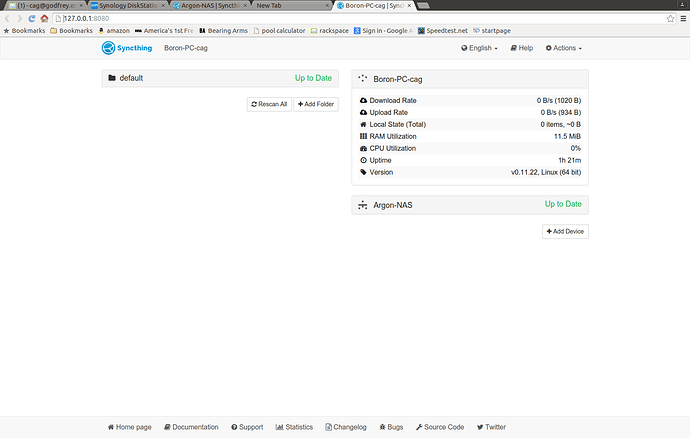 the other user on the same PC

Local discovery only works for one “instance” of Syncthing per device. This is because it needs to open a certain port number, and there’s no (easy, portable) way to open the same port from more than one process.

(It could work for the IPv6 discovery, if that’s enabled and works that way on Windows, needs double checking.)

I have enabled global discovery on all instances. Attached are the latest screenshots. Thanks! 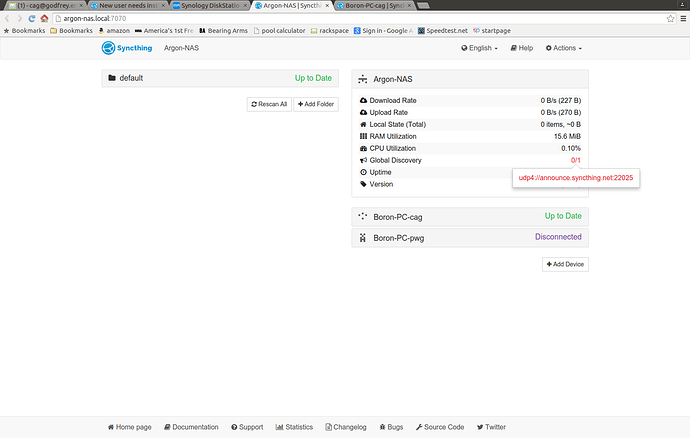 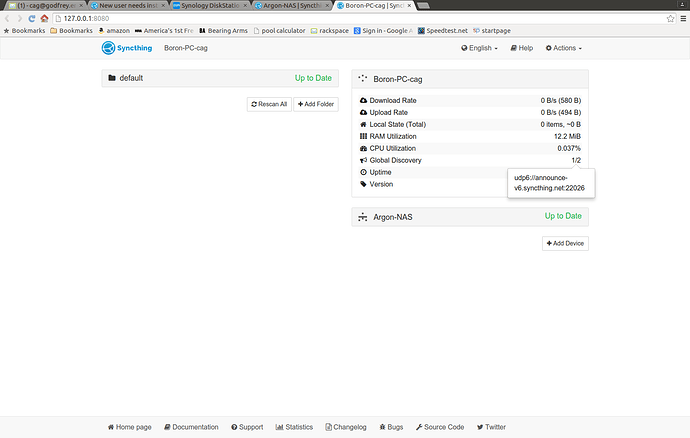 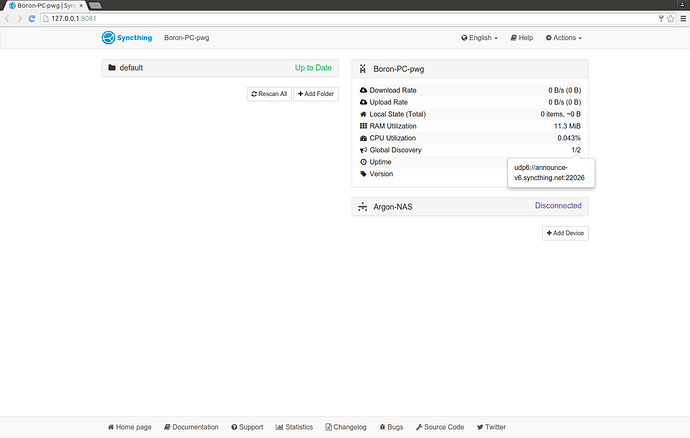 Bind to IPv6 multicast group instead of ::

Are the 3 Ubuntu PCs desktops or laptops. If they are desktops or the laptops only need to be syncable in local netzwork, you can configure them to have static IPs (if not allready the case) and enter the ip:port for each device on each node. That way you can have multiple instances working on the same PC.

Thanks, wweich. 2 of the PCs are laptops and 1 is a desktop. At present I am trying to get everything working between the desktop and the NAS using Local Discovery. However, I might need Global Discovery for the two laptops in the future. That’s one of the reasons I’m not interested in static IPs at this time.

Static ips is not binary, you can have static + dynamic, it willtry either. I guess due to local discovery issues, you either need to get a separate IP for the other user, or actually use a static address, or use IPv6.