Multiple use cases - a long read. 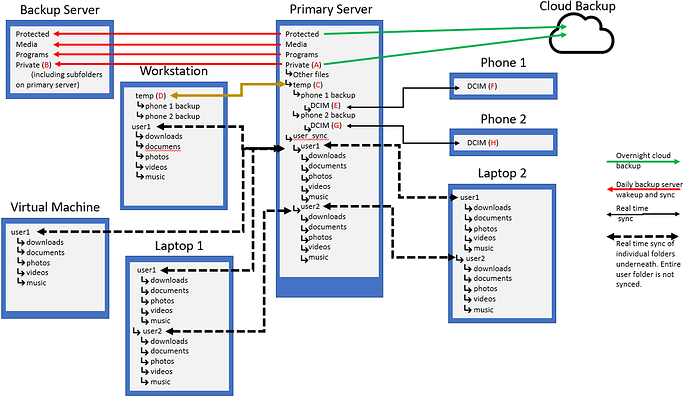 Hopefully this helps someone down the road determine if syncthing is for them. I was skeptical. But so far (1.5 weeks later) I’m convinced. it’s a great tool, maintained by a group of obviously highly skilled developers, and nice helpful people on the forums.

I have four distinct use cases:

use case 3: photo and video editing

I wish you all the best of luck with it, and have a great day! Tiwing.

This was a very detailed and interesting write-up

Do you create those mock-up images yourself, or do you use particular software for them? I also have quite a complex structure, and it would be nice to have it recorded somewhere like that.

we take lots of pictures, and lots of video.

Just a comment on this one. If you actually record videos on the computer itself, then I would recommend using a temporary folder for the recordings before adding them to Syncthing. Otherwise it will try to sync files that are still being recorded, and thus changing constantly. Although, to be fair, I have been helping someone who records tons of videos, and we just keep everything in Syncthing for the sake of simplicity. Fortunately, the PCs and the network are fast enough to deal with it.

I would say that there is nothing paranoid there

. I have had a computer fried by a lightning bolt once. Offsite/offline/remote backups are a must these days.

I use powerpoint a bit for work … it’s just that. very manual, but does the job well enough. Excel has all the same functionality too.

My comment was actually intended to be more about “review” of files rather than actual editing - 1/3 of video taken from the phones are garbage. So I review them locally and delete / rename locally thereby syncing back to the primary server and deleting from the phones.

But Good point on actual editing and thanks for it… I do use Shotcut sometimes to do overlays, combine different angles, or simply add fades. I do most actual editing on files saved on the local SSD because it’s so fast. I haven’t done any editing since starting syncthing but I’ll likely export to the SSD and then copy the final, good, file into the syncthing structure.

I dislike the sync-client for Nextcloud on Linux. Most painful is, that there’s no client running in background when I’m and all other family members are NOT logged in.

Thank you for the detailed visual and written description.

Can you add in what operating systems are in use on the various clients and servers? 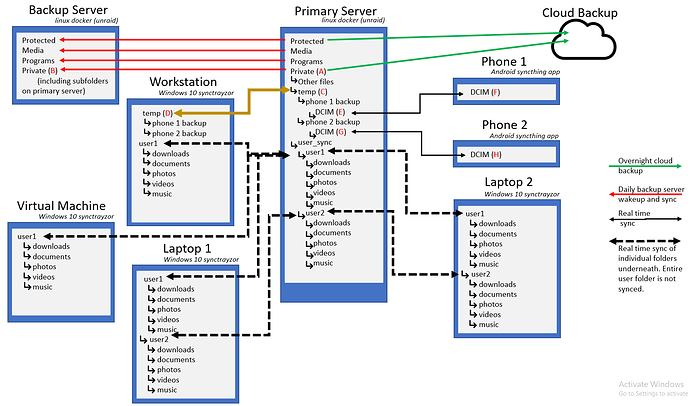 The only occasional glitch is “over the internet” stuff that gets interrupted for one reason or another, but after a day or so it all clears up and goes back to perfect, exactly what it should be doing. Next up is setting up my sister and my wife’s family… woohooo!!