I have a folder on a pc “t14s-cs” that I sync (send only) to 2 NAS, Synolis and Readynas. 1 of the 2 Nas is in sync, the other shows totally wrong states, and an empty list of files out of sync.

On the pc “t14s-cs”, The Synolis shows it’s in sync. The state looks good. 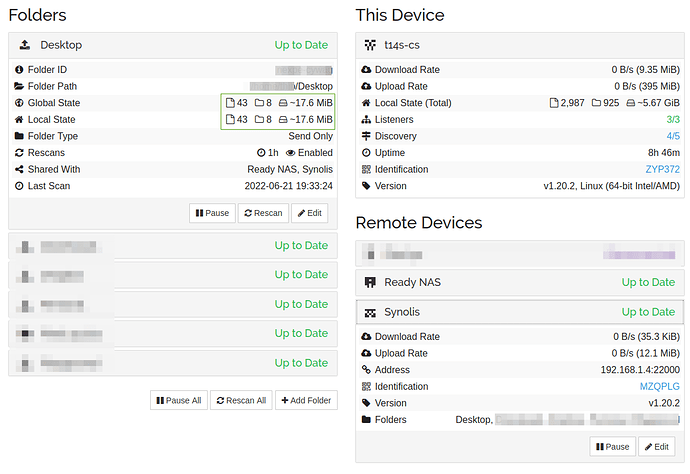 On the Readynas this same folder is showing all green as well (no need for a screenshot here). The problem is on the Synolis. It shows totally wrong state (both local and global). The list of files out of sync are empty. 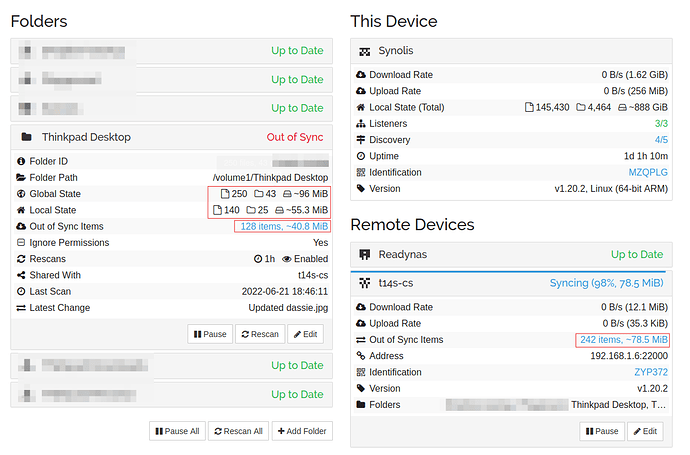 I tried removing and re-adding the folder but the problem remains (the id is the same). I believe there is an issue in the DB and a reset would be helpful. Am I right and can you tell me how to achieve it?

Before resetting the database, how about trying to remove and re-add the folder on the problematic device? Once you remove it, just pause and unpause the remote devices in order to trigger a re-connection, after which you will be presented with a pop-up to add the folder again. You can then add it under the exact same path and see what happens.

If I understand correctly, the “t14s-cs” device is send-only, thus it won’t reflect the larger global state that other devices see in the folder. Have you accepted all folders from Synolis on the t14s-cs, or is one maybe ignored instead? That would be a possible explanation for constant out of sync state on a remote device. Can you verify how many files and folders there really are on each device in the respective folder path?

Thank you for your answers. @tomasz86 I did already try to remove and add the folder again, actually several times, but this didn’t yield any better result.

The state is definitely right on t14s-cs as well as Readynas, there are 43 files and 8 folders on the sending device and on the Readynas.

The reason of the out of sync is probably my fault originally, I can’t remember what I did exactly but I messed up on both devices, I had them both send and receive etc. I added the Readynas only after, and this one is fine.

So removing the folder on Synolis, then removing the actual files there as well, then adding it back and let the files sync from t14s-cs again should be enough to solve the problem.

Brilliant, that was it, thank you so much for the great and super quick support. The culprit was: delete all files from the receiving part. Which is something I had never tried.