I am running syncthing 0.11.11 on debian and counterpart on android.

what is wrong? the folders exists and when I click “edit” the folder path is there… and it used to work some time ago…

Thanks for your help 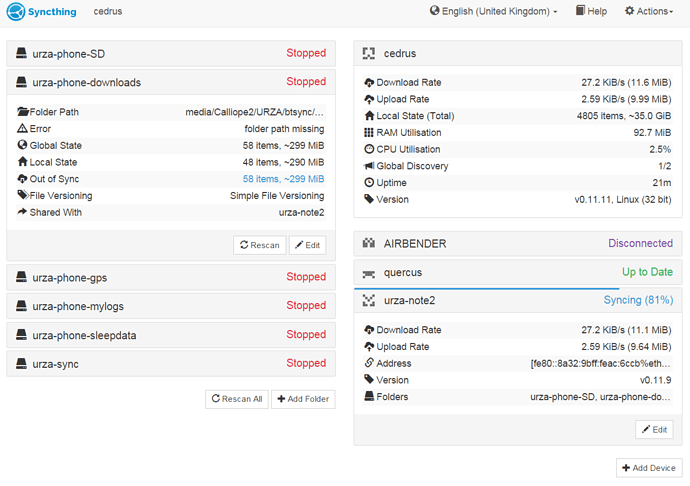 I can’t help noticing that the folder path is relative, not absolute (i.e. it does not start with / or ~/). Therefore it’s probably looking for a media folder in the CWD, which will probably be the directory from which you started Syncthing. If this differed between the two times you started Syncthing, this would explain the issue.

Last time syncthing was running as a daemon, but it is not working anymore, so this time it is simply running from the user that has it installed, so it could be it…

But, how to I change the directory path? The input box is read only…

Stop Syncthing, and edit the config file by hand.

you may add the folders again or just edit the config file. normally it’s at root/home/USER/.config/syncthing/config.xml

relative paths should normally work (they do in my setup) important: use “~” for adding the path…

relative paths should normally work (they do in my setup) important: use “~” for adding the path…

If it starts with ~/ then it’s not a relative path

Thanks guys, adding “/” to the start of the path in config.xml manually worked. I wonder why that was necessary though? Might it be that it used to run as daemon (for whatever reason it is not working now) and now as user? But the daemon was supposed to run program as the same user… Or did something changed between versions?

Like I said before, if the path does not start with / or ~/, then it’s relative to the Current Working Directory that was set when Syncthing was started. When you manually execute Syncthing from the command line, this will be the directory which you ran the command to start Syncthing from. If a daemon script starts Syncthing, it will set this as it sees fit: it might have left it unset, or set it to the root directory, or set it to the Syncthing user’s home directory.