I just set up Syncthing on both my desktop and laptop without issues. Next up were my Android devices, a Samsung Galaxy Tab S and a Samsung Note 3. I started with the tablet, got everything installed, devices added and set up with root permissions since the device is rooted. However, now the app crashes when trying to create the config file.

I can start the app and it loads but just shows “loading” while toaster messages run by showing all that is going on with being granted superuser permissions. However, when it gets to creating the config file, it crashes and I see the toast message “Failed to create Syncthing config”

I cant even get back into the app to turn off the root permission to see if that would fix it.

Anyone have any ideas?

I went into the /data/data/ folder to the Syncthing folder and set the use root to false in the xml file and restarted Syncthing, now the app starts but just sits there “Loading…”.

I see a config.xml file in the com.nutomic.syncthingandroid/files folder but I am not sure if this is the config file that is the one the toast messages said it failed to create.

Please provide the logs from adb.

I went ahead and tried setting up Syncthing on my phone, and on that device everything went smoothly, everything sync’d and all seems as it should there. So its just the tablet with the issue at the moment.

For what it may be worth, I looked inside the config.xml file (on the tablet) that was created and the only thing that stood out to me was the Device ID which is shown as all A’s.

I am not sure how to go about grabbing the logs via adb.

There are a ton of guides on google, but given you’ve solved your issue maybe there is no need.

No, the issue has not been solved. I am still unable to run Syncthing on my tablet.

It logs to stdout which goes to androids system log which can be accessed via adb or logcat app if you have root.

Before posting my logs I thought, let me just try starting over and see if perhaps something just went haywire with the install process. So I used another app to set Syncthing back to first install which wiped out the device I had added, keys, everything but the app itself.

I ran Syncthing and it regenerated the keys and from there I went back through the process of setting everything up. This time around everything worked as it should. That got me curious so I went back in and checked the config.xml file that was generated. Sure enough, it had proper device IDs in there instead of the all A’s that were there previously.

Not sure if that was the issue, but I was unable to find anything else that stood out between the phone, which worked first go around, and the tablet that was not working initially. Now its just a matter of using it and see how it works out longer term.

Thank you Audrius for your help.

I’ve seen something similar in the past, when trying to run the app as root. I think there is some underlying issue here which someone will have to investigate at some point (I’ll do it if I can reproduce it when I next install the Android app).

I have similar problem on my Tablet Alcatel Evo7 (Android 4.0.x) 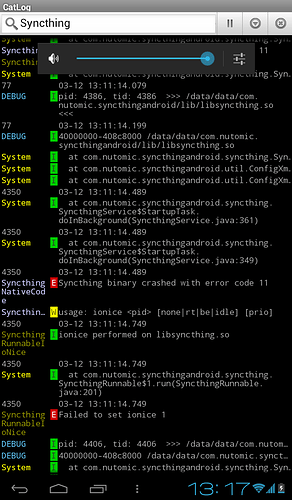 I have “failed to create config, please check log” (in polish)

How can i fix this? Thanks

There will be better logging for this kind of error in the next version. Can you wait for that and then open an issue with the log?