I have three devices sharing a folder that is about 137GB. All three devices already had matching data carried over from using a different sync service. When I linked the third device I accidentally had it sync to the wrong folder and it started duplicating everything from the others. I cancelled this and deleted that folder, but syncthing keeps trying to find it.

I have uninstalled and reinstalled on all devices, I have tried rescanning, restarting several times. I can get the original two devices working but whenever I re-introduce the third I get about 5.8GB of failed items and constantly out of sync. This issue persists even though I know the data in the correct folder is all there, and on all three computers I have selected the same folder and path. For some reason it will not re-index itself and is constantly scanning for those missing 5.7 GB. Very frustrating.

EDIT: The global state on all three devices (the only ones syncing this folder) is 143 GB. The local state on all of them is 137GB. Why can’t it move on from the missing files? I just tried restarting all three at the same time and it did no improve.

On the third device with the initial misconfiguration, did you remove and readd the folder? That should clear out all previous “state” from it.

Yes but I will try again.

It appeared as though it was going to work but now the problem has returned. I removed the folder on the offending computer and re-added it. Very briefly the other two computers had successful syncs.

The web UI with the affected folder/devices expanded.

i’m using SyncTrazor, I don’t use the web UI. Is the SyncTrazor UI OK? 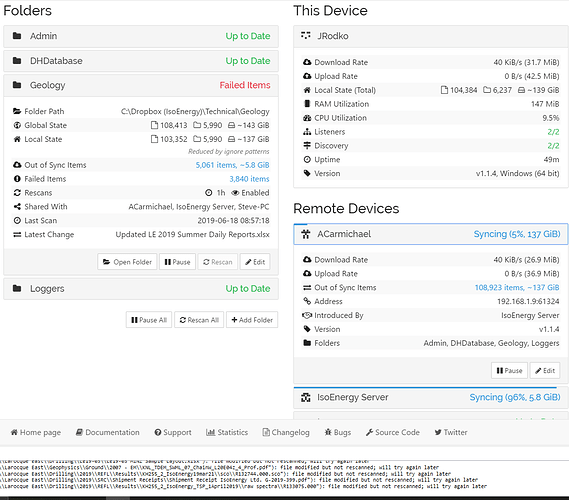 The global state is indeed curious. However the amount of out-of-sync/syncing items is changing, right? It looks like it is still exchanging metadata and comparing state with the other devices - that can take a moment. Looking at the stats it isn’t down-/uploading much (that’s the mentioned metadata), so it’s not retransmitting data.

If it stalls (i.e. no changes anymore in out-of-sync items), can you report back with a screenshot.

Yes I will absolutely. I’ts a lot of data so I’ll wait until all three devices have reached an interim conclusion then re-post. Thank you.

OK. It has returned to where it’s been sitting for the last two days while I’ve been playing with this. Here is the result. It just will not let go of those files! 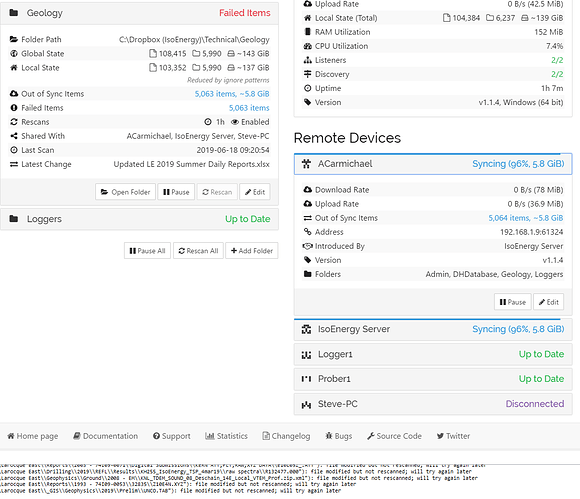 If you could query the rest api for a file which is failing that might hand some useful info, maybe discovering the/a bug: https://docs.syncthing.net/rest/db-file-get.html

If you don’t want to do that, remove the folders on all devices and readd with a new folder id - that means it will start from scratch completely.

Where do I enter that code? Is there a way to delete the index files and get it to rebuild that on all computers?

That’s what happens when you remove and readd with a new id. Alternatively you can, on all devices, first stop Syncthing, then run it with the -reset-db option. That will reset the entire index, i.e. also for other folders.

I need to keep the same folder structures. How do I run the reset-db option? I will like to do that.

I don’t know how to do that with Synctrayzor. However why can’t you just readd the folder with a new ID? You already removed and readded the folder on the third device, just do the same on the others changing the ID. No need to remove or relocate any actual data respectively files/directories.

So i removed the folder from all computers, then I recreated it using a new folder ID. I am still syncing but I believe the issue will persists. I am already showing ‘Failed Items’ and the global/local state values are the same.

It looks like unfortunately I am right back where I started. All three devices are showing the same global state, out of sync items, and failed items.

I’m not going to go through all 5,069 items however the first page is the same.

It seems like this should be a more simple solution to a basic problem. I don’t know what else to do.