I think I’m encountering Device stays out of sync until restart after updating from v1.12.0 to v1.12.1 too.

It first appeared after updating two nodes [A - B] that share a folder from v1.11.1 to v1.12.0. Everything was fine back then after the upgrade and fully in sync. After restarting Syncthing v1.12.0 on node B, it went from “up2date” to “out of sync (89%, 263 GiB)” but the data was still the same as on node A compared as files. I’ve now waited for v1.12.1 in the hope, issue #7122 fixes the problem and updated to it this morning. Still out of sync with the same percentage. I guess the bug is not fully fixed!?

What diagnosis (DB snap, traces, logs, etc.) is required for you to look into this? The normal Syncthing log doesn’t show up any errors.

I’ve already tried to restart Syncthing on node A and B but the “out of sync” status is not resolved.

Thanks for your help. 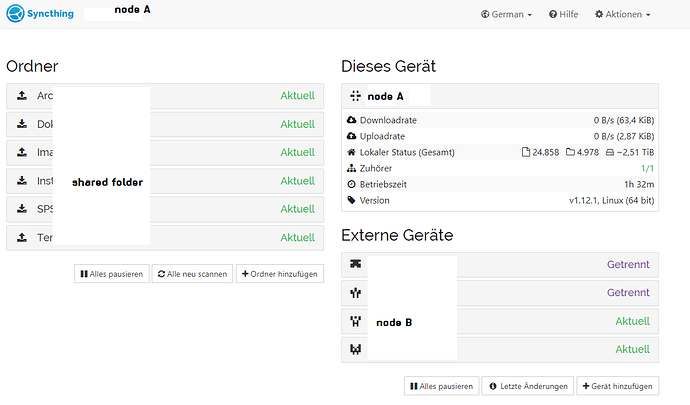 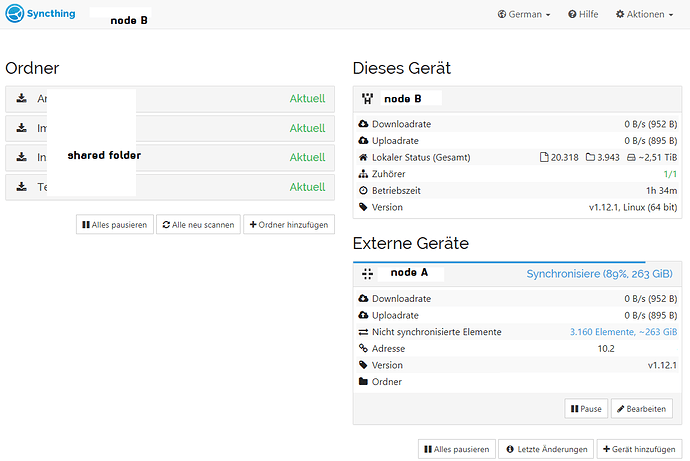 The 3.160 elements dialog shows files that have not been changed for a long time (e.g.“archived installers”).

@Alex @Andy Are your problems resolved by the v1.12.1 update? I’d like to know to narrow down if I encountered “this” or “another” bug.

I’ve already tried to restart Syncthing on node A and B but the “out of sync” status is not resolved.

Then what you are seeing is likely not #7122 but what’s fixed in https://github.com/syncthing/syncthing/pull/7134 (there were a few fixes based on @Alex’s reports in Device stays out of sync until restart)

That does not get resolved by a restart. Meaning the fix in v1.12.1 prevents the problem from occurring, but if it already occurred it wont get resolved. You’ll have to run with -reset-deltas on noda A for that. In hindsight it would have been good to do that automatically for everyone on upgrade to 1.12.1.

Are your problems resolved by the v1.12.1

I did use -reset-deltas once with the fixed version (some nightly that had the relevant fixes) just to be sure so it matches with what @imsodin wrote. No issues since then.

In hindsight it would have been good to do that automatically for everyone on upgrade to 1.12.1.

Maybe do that for the next version just to be sure because there may be cases of this on devices where people rarely look?

I’m assuming that nothing has changed between v1.12.1-rc.1 and Final v1.12.1. Since the changeover a few weeks ago, everything has been running smoothly, including the two Android versions Syncthing and Syncthing-Fork.

What gave me very big problems yesterday was switching on another Windows computer that was last active in September 2020 and on which v1.10.0-rc.3 was still installed. Only 1 folder is connected there, but this is connected to 2 other Windows computers and 3 Synology NAS. The problem was not so much the version as the adjustment of changes to the current state, so I had to intervene manually.

In the end, I had to completely rebuild a folder and connect it to all devices, then it worked again.

What I mean by that is that a functioning environment can be overturned by such influences, even if nothing is changed. That was the case with me too.

In addition, functions such as -reset-deltas should be able to be triggered in the GUI so that they work reliably and on all platforms. That would actually be a feature request.

You’ll have to run with -reset-deltas on noda A for that.

Thanks! That was blazing fast support, excellent :-). The problem is now resolved.