Asymmetric out of sync stuck syncing

The problem is as follows:

This condition persists since several hours now and no transfers are happening.

Last night i already deleted and rebuilt the index of all clients due to another problem (while all devices were paused everywhere). I connected them only after all folders were scanned.

After that Master had to do some serious syncing even though not much was actually transferred (all files were in sync before), yet Genesis did immediately say all in sync.

Even though i am using ignore-patterns i doubt it has to do with this:

Hi all, How can I easily tell which files are stuck or which are sync'd? Here is why: I am running syncthing 0.14.12 on windows 10 (SyncTrayzor), ubuntu 16.10 (Syncthing-GTK), and mac (syncthing-macosx). The addition of the osx machines led to all kinds of ".DS_Store" file conflicts (as one would expect) so I added these to the .stignore file (and put this .stignore file in all archives of all computers). No conflicts since. However, since then, the sync keeps stopping at a fixed percentage:…

I am using the same (shared in one separate folder) included global ignores file for all my folders on all devices.

The global and local state is everywhere (on Genesis & Master) identical. No changed files are shown anywhere.

Any help would be appreciated!

It could mean some files simply can’t be downloaded. Screenshot of the UI would help.

Here screenshots of both clients: 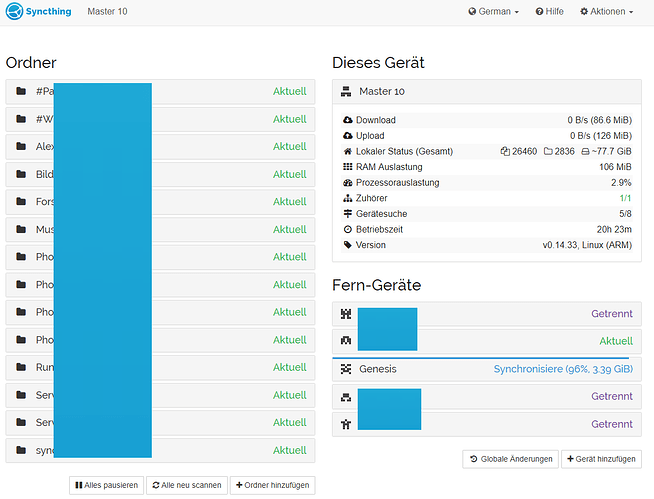 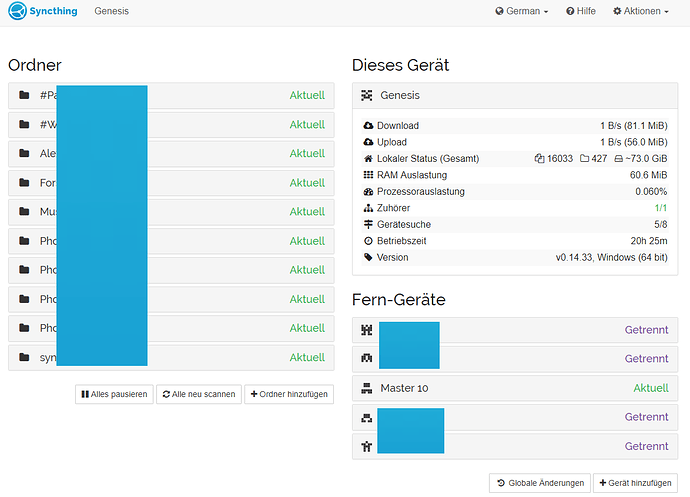 But if that’s the case it should tell which folder and which files, right?

I looked through all folders. All seems fine.

And before this all clients were in sync. So there should be no difference here now.

It looks like one of the folders is shared asymmetrically, and ignored on the other side.

As in A shares F with B, so A assumes B should have content of F, but F does not exist on B or is not shared with A.

As in A shares F with B, so A assumes B should have content of F, but F does not exist on B or is not shared with A.

Ok sounds reasonable to explain the condition. But if this is the case i would expect that Syncthing detects the situation and updates the meta-data accordingly.

In deed you are right! I found the culprit: 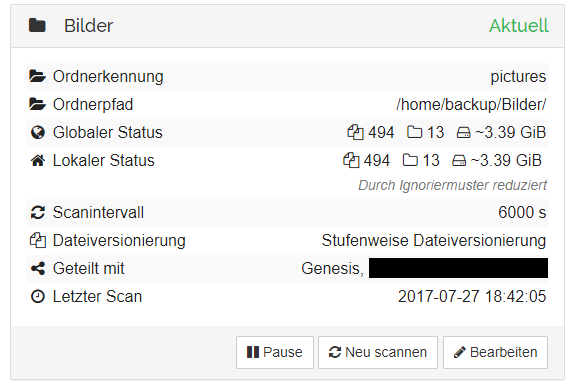 Somehow Master thinks it is shared with Genesis, but Genesis does not have it.

Why can’t Syncthing handle this case in a clever way? Like for example:

But anyway: Thanks for the help!

It already prompts you if that happens (on the other side that has the folder unshared), but you must have pressed ignore.

but you must have pressed ignore.

And how do i get it back now? Manually add it on the other side (ok that would work…)?

I tried un-sharing and re-sharing it on Master to no avail.

Yet again: If i pressed ignore or did not yet accept it, i think the other client should show, that the folder is not set-up instead of “syncing X GiB” but not progressing …

What happens if i add a new (empty) folder on Genesis with the same ID as the missing one on Master?

Does it delete all files on Master?

Or sync all files from Master to Genesis?

You can shutdown syncthing and modify config.xml by hand and remove the xml element with the id of the ignored folder somewhere there, or just add an empty folder with the same id. That should not remove any files, unless something crazy has happened. As a safe guard you can set the folder to send only on source side to be able to reject any changes from the empty device.

The prompt has 3 options, accept, later and ignore and you must have pressed ignore.