Currently I have 6 devices in sync, including the Win10 PC, and 5 Android devices.

There are also 5 folders, 4 of them in sync, except the Whatsapp folder as shown below: 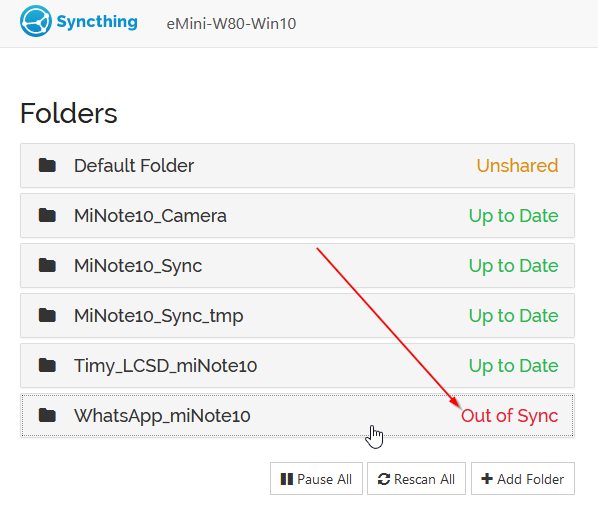 Checking the command folder of Syncthing.exe:

There a bunch of errors about the whatsapp folder, most of them are:

so what’s wrong? and how to solve the problem and make the whatsapp folder in sync?

Thanks for any kinds of help!

The file won’t be there on the Windows machine, but it should be on the Android device. What did you use to check its presence? If it was the default file manager, then you may want to try using something else (e.g. Material Files from F-Droid or just ls "/sdcard/WhatsApp/Media/WhatsApp Documents/Sent" from ADB or a terminal emulator).

Syncthing doesn’t allow syncing files that end with a dot to Windows devices anyway, so the only solution to get rid of the problem is to add *. to your ignore patterns in Syncthing. I think doing so on the Windows device should be enough.