Folders appear up-to-date but says Syncthing 84% under Remote Devices. Browesd though all the out of sync items and some mod time date back all the way from months ago. Just updated to v1.10. 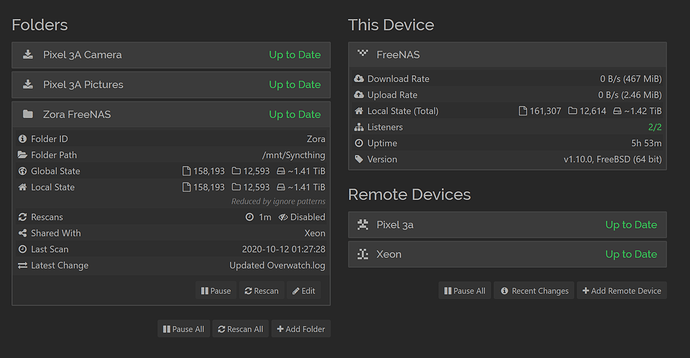 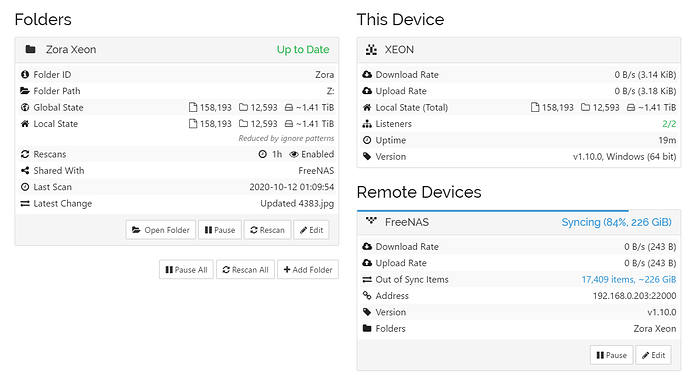 What is the situation after new start of Syncthing or reboot the NAS? Maybe try to use on your NAS in the three peers the option “Ignore Permissions” in the Advanced Tab.

Yes, I have rebooted both systems. I checked the out of sync items and it’s just a bunch of files where the mod times range from recent to as months ago which doesn’t make any sense.

Syncthing still works without issue with folders showing updated on both. It’s just the Remote Devices UI showing stuck at Syncing at 84%.

I am still running version 1.7.1, and have been holding off on going to 1.10.0. What became of this issue? Is this a FreeNAS/FreeBSD issue, or has this issue been observed on other OSs? Or maybe this issue instance was a one-of?

Since I have received no feedback, I have currently ignored this as everything seems to be syncing and working as intended (folders show Up to Date and file/folder counts in sync). It’s only stuck on Syncing in the Windows machine and not the FreeNAS. I am hoping this is a UI issue and not actually jeopardizing ~17,000 files

There have been previous topics on this subject in the forum with debugging steps and suggested fixes, which usually involves either setting an env var or a command line switch.

I didn’t really read any fixes, just work-arounds, and this seems to suggest the issue is at least now reproducible.

Shutting Syncthing down while pushing files to multiple devices corrupts the database?

I’ll monitor the boards, I’m rock solid with 1.7.1 so I will wait to see what unfolds.