Up to Date Folder Missing Data

We migrated Syncthing from a Windows server to a Linux server and run it within a Docker container. As of doing that, all new remote devices we add (all of which have been Macs) do not fully sync one specific folder. The GUI on the Macs thinks the Global State is about half the size it actually is. So it will eventually complete and say “Up to Date” even though it’s missing over a terabyte of data.

The workaround we’ve been using has been to let that finish, stop Syncthing on the Mac, and start it back up with the --reset-deltas command. It then re-scans the folders and realizes it’s missing a ton of data and begins grabbing it all. But having to do this for each new setup is cumbersome as it requires us to touch each machine twice on separate days, instead of just doing the initial setup and letting it fly.

I’ve attached a photo of the folder on a Mac and on the server and would be happy to provide any other troubleshooting information as necessary. Both are on 1.18.4 and as far as we know it also happened in 1.18.3. Thanks. 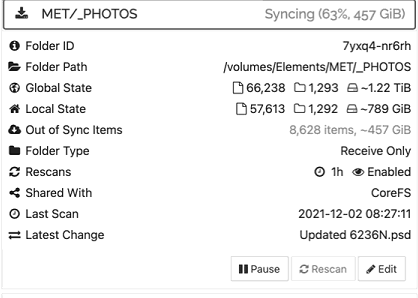 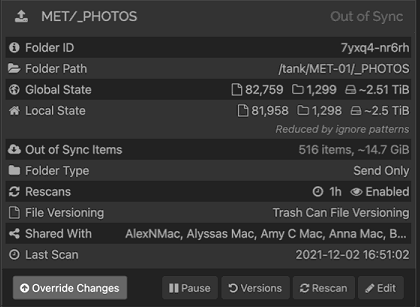 As you can see, there is an ignore list activated. Such displayed deviations can result if different ignore lists are used for the same folder on the different devices. Doe you check that?

The only ignore pattern is this:

And as noted the --reset-deltas command makes it recognize that it has over a terabyte left to download.