I have an untrusted device, which syncs separately with two trusted devices. With all three devices actually in sync, the untrusted device is reporting syncing at 99%, and the encrypted files are listed as “failed items” under Remote Devices in the GUI.

Here is my set up:

I have folder 1 shared among all three devices. That has been working for a long time.

I added folder 2 and shared it between Device A and Device C, configuring the folder on Device C as untrusted and providing a password on Device A. That works fine. The encrypted information shows up on Device C, and when I run the command line decrypt facility (output to an unshared folder) I get back the original information. Both device A and C report “Up to Date” in the GUI all around.

I then added folder 2 on Device B, shared only with Device C. On Device B I used the same password that was used on Device A.

But at this point Device C is reporting syncing at 99%, and the encrypted files are listed as “failed items” under Remote Devices in the GUI. If I add a new item in folder 2 on Device A or B, it syncs to the other and Device C lists an additional encrypted file as a failed item.

The syncing of folder 1 across all three devices still works correctly.

Posted under support, but I’m not asking for support - just offering this experience with the new untrusted feature in case it is helpful. Happy to provide further info.

Two bugs with the new untrusted features have been fixed since and released in v1.16.0-rc.1. Please report back if you still experience such problems after upgrading.

Still having the same issue. The GUI on Device C reports that there are failed items consisting of encrypted folders, apparently representing some of the files in Folder 2. .

The fixes only eradicated the root cause. As cleaning up existing failures would have been complicated, and it’s a feature in testing, I considered a bit of manual cleanup being necessary as acceptable. Which means:
Failed items as in unexpected items and you get a red “Delete Unexpected Item” button, right? In that case clicking that button should resolve it. If it’s something else, please post a screenshot. Or just remove the folder on the untrusted device and re-add it to start from scratch.

No, not “unexpected items.” Attaching screen shots showing the former situation FYI, but I will delete the folder and start over. Though at this point I may wait for a stable release.

This is the GUI on Device C, Device A is the remote device starting with A. STNewTest is the folder that is encrypted on Device C: 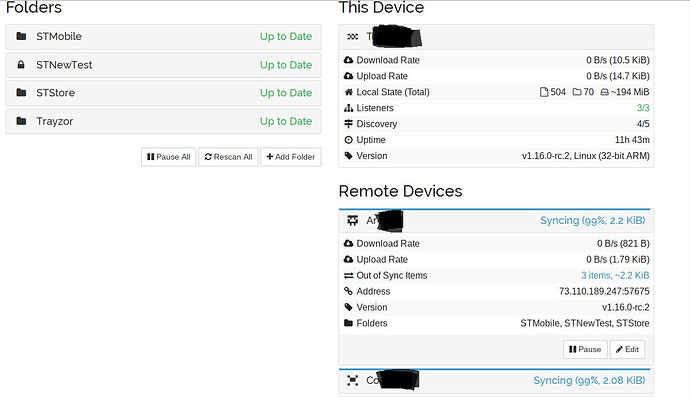 The “Out of Sync Items” gives a list of some of the (encrypted) contents of STNewTest (Folder 2 in my original post): 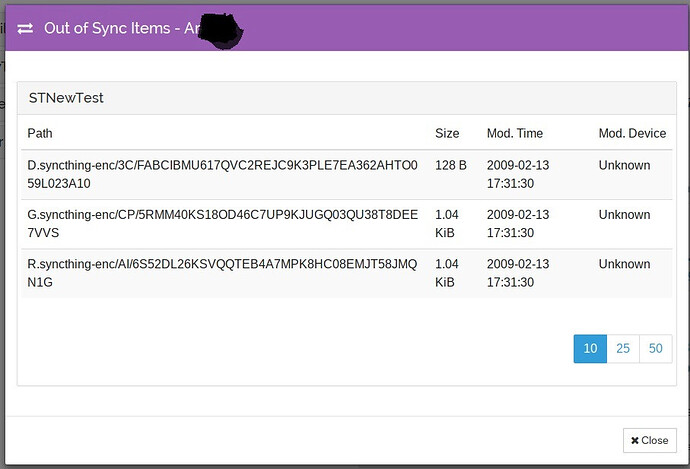 Then I guessed the wrong of the two fixed issues as the culprit: That one could have been fixed by running with --reset-deltas. So either that or removing the folder entirely, if you already did that, should resolve it.