Unresolvable "Out of sync" after full disk

I have device A, which has a folder in “Send Only” mode. Another device B is syncing this folder normally. (Device A is a phone and the folder is it’s camera folder, so I’m syncing photos to my laptop B.)

I added a file to device A (took a photo). However, device B had too full disk so the syncing failed. I freed some disk space and lowered the threshold of free disk space that Syncthing requires. Now there’s plenty enough disk space. However, the folder still stays “Out of sync”: 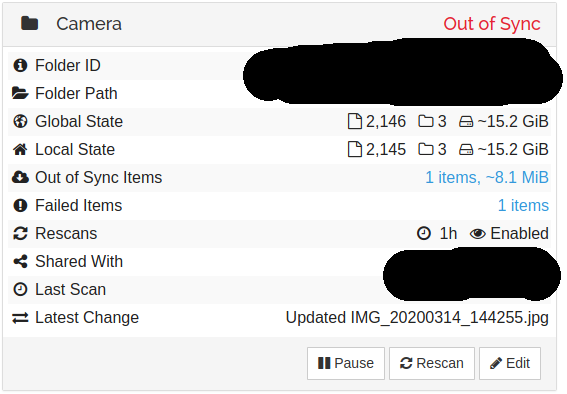 I’ve restarted syncthing on both devices, tried pausing and unpausing and rescanning the folder on both devices. Nope, nothing helps. The folder stays “Out of sync” on device B, but still this device shows on “Remove devices” section that it’s “Up to date” with that device.

Also, I thought there should be “Override changes” button visible on device A in this case, but there isn’t. Device A is Android device and I looked both the normal Android view and web GUI.

How can I force sync? Device A still has this photo that device B hasn’t received. Device A should just send it… Any ideas?

(Just for reference, here’s the GitHub issue I opened but which was closed and I was directed to this forum: https://github.com/syncthing/syncthing/issues/6423)

It still says “insufficient space” in your screenshot. What’s the details on that error, when you mouse over it?

What is the MinDiskFree setting on that folder and the output of df -h /home/jluttine/.syncthing/folders/Camera?

This is for where the database is stored, not the folder. There are two separate settings, one for database, and one per folder.

I have only two partitions: / and /boot. So everything syncthing related should be under that / shown above.

Well, this is weird. It suddenly synced now!

My hypothesis: I had a higher threshold for the minimum free disk space when the syncing originally failed. I then lowered the threshold and freed some disk space (but maybe not enough for the original threshold).

It should have picked it up immediately: Changing the minimum required disk space restarts the folder, which then retries the sync with the new setting.

It had been in out of sync state for a few days after I lowered the threshold. After that I had also restarted syncthing on both devices and pause&unpaused the folder on both devices, trying to trigger syncing.

@wweich Ah, now I understand! Yes, sorry, I lowered it only for the database apparently. I wasn’t aware that there’s a different threshold configurable for each folder, but indeed it makes sense. So, it was just my ignorance. Thanks a lot everyone!