Trouble connecting: I can see the devices that are connected, but the folder shows up as empty

I’m going to be getting a Onyx Boox Note Air 2 Plus, and according to this video I can sync a folder between my PC and it, so I can move PDFs from Zotero to the device and back, so I can annotate the PDFs (which is the only reason I’m getting that device).

Before that has arrived, I’ve tried connecting my android phone (Huawei P Smart ~2018, which uses Android 9.x. Could this old version be a source of trouble?), and I can connect the folders, i.e. Syncthing on my phone gives me the notification that my PC has asked to share a folder. I can then see the devices on the other one, and that a folder is shared, but beyond that, nothing works.

On my PC I can see that there is something IN the folder, but on my phone it’s not showing up. One time (out of several) my phone was saying that it was at 50% syncing, but it stayed that way for minutes, and the folder only had a tiny photo in it.

Please post screenshots of the Syncthing Web GUI from both sides. On Android, you can access the Web GUI using the left slide-out menu. Judging by the description alone, it seems that the phone folder may be set to “Send Only” which means that it won’t accept any changes from other devices.

You may also want to check https://docs.syncthing.net/intro for a general idea and overview of what Syncthing is and how it works. 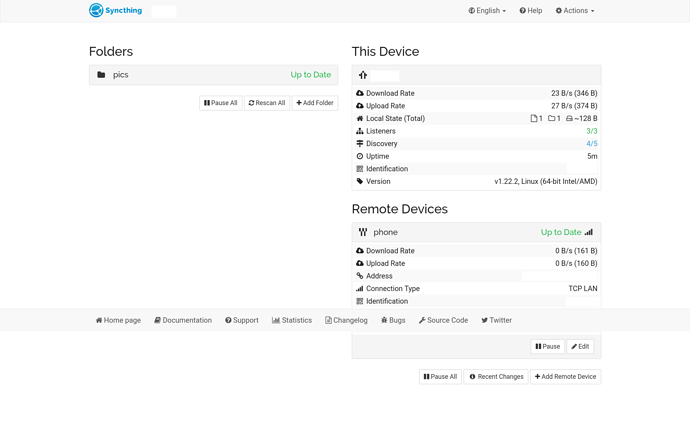 Here are the two screenshots. FWIW I double-checked, but the folder is not only set to send, it’s set to Send & Receive.

Any other ideas? Thanks!

Edit: I’ve just tried Synthing-GTK, and I was able to sync a photo from my phone to my PC, but not the other way around. Does this help or narrow down the problem?

Edit 2: Syncthing-GTK seems to default to “Receive only”, so when I took that out, it now works. Question is, why didn’t this work for the Web GUI?

Can you unfold the folder details on Android? Syncthing-GTK is just a wrapper over the proper Web GUI, so it can’t really operate on its own. Also, it’s basically an abandoned project, not really recommended to be used anymore.

It would also be useful to be able to see the blanked out first part of the device IDs. They’re not sensitive in terms of privacy/security, and the reason why they’re important here is that on the PC side the connection type says “TCP LAN” while on the phone it says “relay” which isn’t possible if the two are connected with each other.

Does this tell you anything?

Any recommendation for another program then? I’d prefer a non-web UI option, if possible.

The situation on the last two screenshots looks normal, although on the phone, both remote device were disconnected. What happens if you add a file to the “Zotfile” folder on the computer then? Does it sync to the phone?

You may want to try out https://github.com/Martchus/syncthingtray as an alternative to Syncthing-GTK if you need a system tray utility that can also provide some information and basic control. You will still need to use the Web GUI for the proper configuration though.

Yes, that still works with the Web UI

Is it normal that I always have to restart both ends for the syncing to go through? The GTK program seemed to monitor things automatically better.

Also I looked at SyncthingTray but I can only find .exe files, which won’t work as I’m on a Linux Mint PC. Any other suggestions? Thanks!

Also I looked at SyncthingTray but I can only find .exe files, which won’t work as I’m on a Linux Mint PC. Any other suggestions? Thanks!

Cool, thanks! Not having luck with installing it, but I’ll keep trying

Just a side note, but the Syncthing-GTK project is actually picking up steam again in the last couple of weeks. The original maintainer has stopped working on it, but several people have contributed improvements in their own forks in recent years - especially migrating to Python 3. Now they’re trying to reconcile these forks and re-establish a new official version.

Awesome, do you have a github link for one of those projects? Thanks

Might change once again though based on the recent discussions about a possible rename, see Rename the app and change app id · Issue #11 · syncthing-gtk/syncthing-gtk · GitHub.