I am running SyncTrayzor and I would like to sync My, My wife, and my daughter’s phones to the server. I have things working with mine, but it is just dumping the files/folders to the main default folder. How do I set this up so that each user has their own subfolder under the default one? I read the wiki and poked on here as well as Googled away but no luck. I feel like it is so obvious and that is the reason I can’t find it, but alas I am having a mental block and cannot figure it out. It is running Synctrayzor on Dell R210 and the devices are 3 Android phones. Thanks in advance. Sorry if this is super simple and in my face.

You can set a path for each accepted folder using Folder path in your servers syncthing UI. If you don’t select anything it will be a folder named like the Folder ID and relative to the default folder for shares.

Either pick a fitting folder name which will cause syncthing to create a path relative to the default folder for shares or you can also specify an absolute path like D:\shares\john-doe\photos

Ok, under folder Defaults, I Set the Folder path to D:\Sync. This should create a directory called “Sync” where it will dump the contents. I would like to have a folder under this one called “Person1” and “Person2”. Where do I set the “Person” directories so that there are 2 separate folders for each person to sync to? 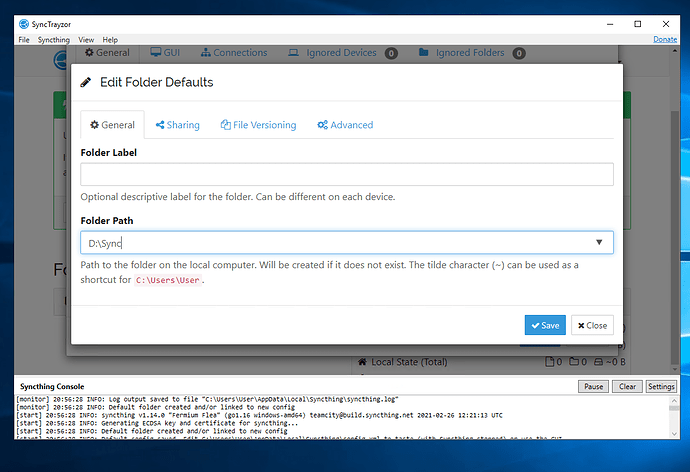 If I am reading correctly, I may have to run a separate instance of SyncTrazor for each device if I want it syncing to separate folders.

Ok, under folder Defaults, I Set the Folder path to D:\Sync. This should create a directory called “Sync” where it will dump the contents.

The folder configured there serves as the root for all newly accepted shares. Just add a folder from a different device and set Person1 as its folder path.

Understood, So on my phone1 I made a folder called Pixel 5 from within the Android Syncthing app. I shared it with the server and it created a folder called Pixel 5 on the server. Now here is where I run into an issue. for that Pixel 5 folder on the app I have to pick a directory to sync, so I pick the DCIM folder. Now I also want to sync my Downloads folder from the phone. How do I get the folder “Downloads” to show under the Pixel 5 folder as well? In order to even add the downloads folder, I have to create a new one within the App. So now I have D:/Sync/Pixel5/DCIM/Files and D:/Sync/Downloads/Files instead of D:/Sync/Pixel5/DCIM/files and D:/Sync/Pixel5/Downloads/Files. I want to be able to select multiple directories on my android device and nest it under the Pixel5 folder that is under the Sync Folder. I feel like I am wayyyy overthinking this.

Why don’t you just create D:\Sync\Pixel5 manually and create all shares of this device in there? No nested shares necessary and all tidied up.