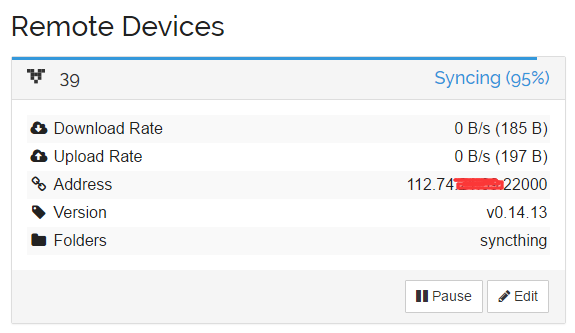 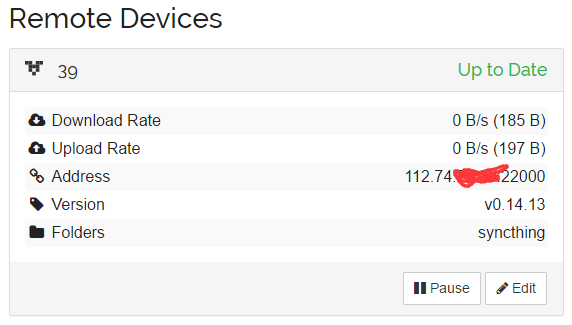 It’s most likely due to ignores on either side.

Or ignoreDeletes, or a bug.

I have this sometimes, too. It’s always 95%. I doubt it’s related to ignores. I think that the gui, for some reason, thinks there are deletes to sync, as 95% is the “hardcoded” value for “only deletes left to sync”.

I just restarted Syncthing on my server to test, and it showed 95% for my Desktop for about 20 secs, while all other devices had the correct status immediately.

I saw the same thing and finally was able to find that it was a “bug” but a “bug” in one .stignore file on one computer (i.e. my fault). If all the stignores are identical, the sync status turns green.

Update: Sorry for the delay; many computers at many locations to troubleshoot. It turns out that if even one folder on one computer has a slightly different .stignore file, then this behavior appears. There was a bug in one of mine. On the other hand, if all have the same exact .stignore file, I find the global and local states are identical and everything appears green, happy, and reassuring. Great! Would it be possible to add a checkbox for "synchronize ignore patterns" in each folder's…

During the process, I got the impression that sometimes it’s possible to have a situation where one computer can think it’s sharing (or supposed to share) one of the folders with another computer, but it actually isn’t, leading to it displaying only X% synced. I haven’t done a systematic study of how to reproduce this, however, but it’s something to maybe consider (loose evidence at this point).

@jaxankey did you always have 95%? If not, that’s another story.

I do not set any ignore settings.

I have to recant my statement about ignores

Turns out, I do use ignores in one of the folders ( with just one ~70K file, so it slipped my mind). That’s why my server (with ignores) shows 95% and my Desktop (no ignores) shows 100%. After settings the ignores on both devices and rescanning, they now are up to date.

Right there with you.

I should have used “recant” in my post as well, since my problem was also just some little change I’d forgotten I’d made on one of my many folders / machines.

@wweich, it would always be a fixed value, which corresponded to me having forgotten I’d excluded the “.sync” folder from Resilio when I initially switched.

PS- Wow did Resilio go down the toilet in terms of reliability.