Syncthing simply isn't working on Synology NAS - can anyone give a hand? :)

Ok - I can find nothing in any package description on how to do this. I have looked at all the links and searched and cannot find anything through the package to set debug. The log shows no data. I assumed that this was packaged by you chaps, but I guess I was wrong. The link to the dev cytec is not currently working…

I tried stopping the service and running the command suggested, and get this recurring:

I can see nowhere to turn on debugging in the synology: 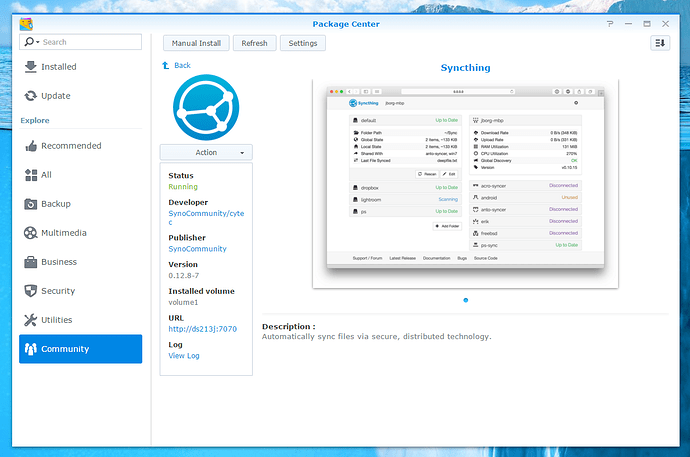 I suggest you double check the device ID’s to make sure you added the right thing on the right side.

Thanks Audrius. I think what has happened here was the damaged config from before when I did the in-browser upgrade has carried over. I suspect this will take a lot of tweaking, so I have a question before that.

Is it possible to uninstall and reinstall the app without losing the repo that took months? Can I copy a folder out and then clean install/replace it?

I don’t know, we don’t provide the app on your NAS, I have no clue what uninstalling does. I think all you need to do is double check the device ID’s on each side via the web ui, and verify that each of the peers has the other peer added in the device list by looking at the ID’s of existing devices.

I suspect that there is a lot left over from the failed upgrade.

I had installed via the synology community package, and then run the update from your GUI. This totally broke it all… then the package updated on synology and I thought it was running again. I think old data are damaging the configuration somehow.

There is reference to 0.11.0… Perhaps it is picking that ID from another config file I’m not aware of. I’ll keep looking, and appreciate the help.

Hi Chris, I have Synology NAS as well. Just uninstall the app, delete the configure and db and start again. Well, at least that’s what I would do. Before syncing I’d let both stations fully index and then pair them. Also because NAS CPU is not powerful I’d sync folder by folder, once one is in sync, add another. This shouldn’t take months rather day or two.

So, a quick update. I followed advice from bedosk and just cleaned it all off and started again. The API keys were different, and device IDs. I connected them, set them up, added the first folder - about 123GB. This took a few hours to scan on both, the ds215j is a little faster than the other.

Success!! They scanned, then they synced!

So I added another folder, this one having 328GB on one and 525GB on the other. After nearly a day of scanning, they finished!

And no data has been passed between them. Global state is different on both, and I can’t fathom why it worked on the first folder but not the next.

Same with the next folder I added (just in case) - 740GB on one, 650GB on the other, all says up to date but no info being passed. IT seems that they don’t even connect now.

Really puzzled by this behaviour. I have rescanned, restarted both NAS boxes, checked CPU. Nothing.

I really want syncthing to work, it seems to be so helpful once working, but if I can’t resolve this I’ll have to consider alternatives. Hope it’s something basic - I will also test removing the .stignore files at some point juuuuust in case it’s something silly like that.

Quick update. Removed .stignore from the video folder on each (740GB one). No change. They have just stopped talking. Really odd after the first folder was so convincing.

So the question is whether they are able to connect or not. If they are not connected, don’t expect it to work.

Quite. The odd thing was, they were connected, and they have fully synced one entire folder of 100+ GB. I simply don’t understand what could change, and they “see” each other sporadically. at 4am, for example, but they won’t talk since then (this was some 4-5 hours after I restarted both devices). I just don’t know enough about how it operates to be able to guess what has caused this behaviour… was hoping you could hazard a guess/get some feedback from other Synology users. 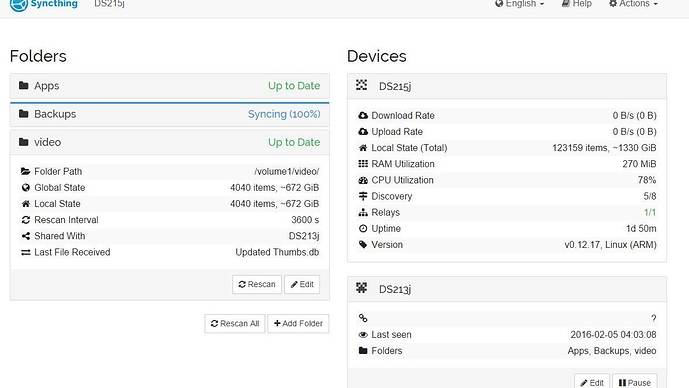 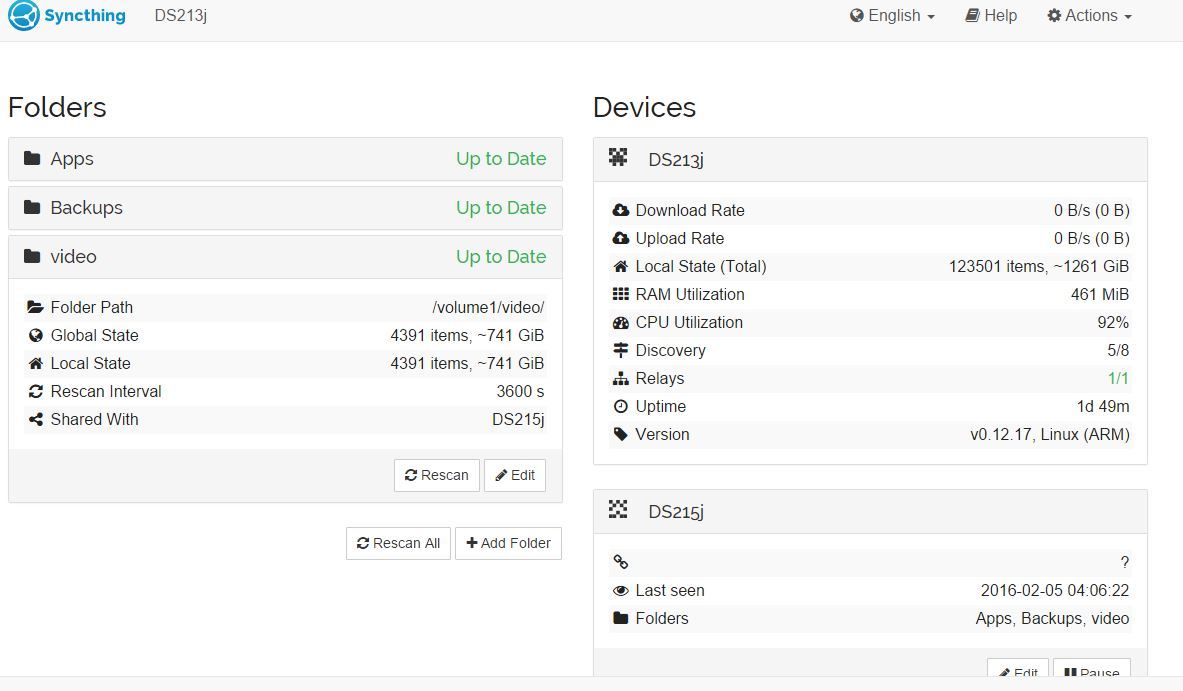 I’ve explained which logs are required to be able to debug this, until you are able to provide them, there is not much we can do.

Yeah, I think the ultimate answer will be too slow CPUs. 100GB works, 1TB not. You can try to adjust timers between both devices. There are two parameters that do ping if comms ok. The problem is that on reconnect they start to exchange indexes first and that might take an hour on your setup. By that time because of timers they disconnect and start again. So no data is sync. There used to be pingTimeoutS paramter, I’m sure someone here knows what it is called now. Just for the record I solved my problem with upgrading to much more powerful NAS

They seem to be not even connecting, so I think it’s nothing todo with CPU. I think only logs can tell the truth.

The ping interval business was removed a long time ago and resolved in other ways, for example, data flowing in general implies no need to ping.

Yes, logs will reviel what it is. Just that I remember vaguely my symptoms were quite similar. 2 devices, NAS and PC. 100GB all ok, 1.5TB and headache. But let’s wait for logs.