Syncthing instances does not connect

If it’s Windows, one of the devices might think it’s on a “public” network, which causes windows firewall to filter multicast packets out, killing local discovery.

No it is both Linux Mint

The same argument applies, some distributions firewalls filter out mutlicast packets by default.

Both global an local discovery is enabled on both mashines.

Does discovery actually show X/Y on both sides?

Also, discovery is cached, so you should give it some time, like 10m.

This is the otput on both mashines the same. I give them hours to find each other 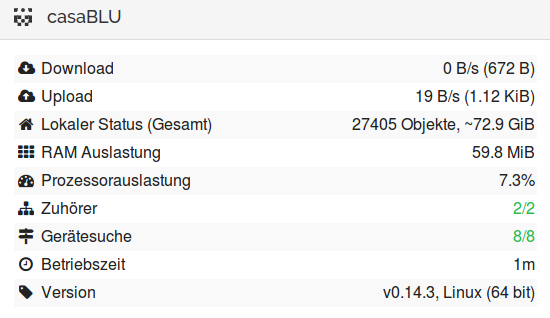 Have deleted the device in Syncthing GTK and added via the web interface again. Thereafter, the connection could be made! In the logs before was nothing unusual.

Could be a syncthing gtk problem. Similar thing happened here:

I've installed syncthing (latest version 0.14.3) on 2 machines but both tell me they're disconnected and last seen never. So I tried to reinstall syncthing, syncthing-gtk and syncthing-inotify on both machines several times without success. When I take a look into daemon output I don't see any error messages, but INFO. Syncthing already worked before on this network and my home setup without any issues. [NT2BQ] 03:05:05 INFO: syncthing v0.14.3 "Dysprosium Dragonfly" (go1.6.3 linux-amd64) jenk…

If you still have the old startup logs, check what address the remote device had.