syncthing files are out of sync forever

why does Syncthing, seemingly randomly, pick files that it will never, ever, sync? sometimes it’s been permissions, which is fair, but other times I can only get around it by deleting the sync, deleting the entire folder, and then re-adding the sync so it redownloads everything, but other times it STILL won’t sync some aparently random subset of files.

right now, it considers files out of sync when I deleted ALL THE FILES it says are out of sync and rebuilt the entire sync on the system that it says has out of sync files - there ARE no files on that system, they all re-downloaeded from elsewhere. why would a sync program not SYNC the files?

I have had this issue show up for all the years I have been trying to use Syncthing and its…so frustrating. I don’t care about versions, or modifications, or sync conflicts, none of these files are actually important, it’s just convenience, but having to fight with it constantly is not convenient. i just want the folders all the same, all the time, with whatever are the most recent files.

sometimes I can get the “override” button to show up if I set one of the systems to send only, but it’s not consistent, and for these files that are permanently out of date it doesnt appear. if there was an override button, or something, maybe I could fix it, but it’s automatically wrong and I can figure out nothing that would cause it.

the idea of the program is so amazing but I find the implementation so frustratingly obtuse.

Understanding that things may be quite frustrating often, if you’ve got issues with specific files not syncing, please open forum topics in order to debug them. This really is the only way to inform the developers that something’s not right (except for serious breakages leading to panics and such, which are automatically reported by default).

The common problems with files not syncing that I’ve personally observed are, as you already said, permissions, but also filenames which are unsupported on a specific OS (commonly Windows and Android) or filesystem (usually FAT on Android). In the past, Syncthing used to fail when dealing with case-only renames on case insensitive systems, but this particular issue has long been fixed now.

if you’ve got issues with specific files not syncing, please open forum topics in order to debug them.

there are 4000 files not synced, so i am not sure what this means. this is a forum topic, isn’t it?

I opened it to find out if this is something with the program itself or PEBKAC, because I don’t know which, I just know it drives me nuts (well, nuttier)

if I’m in the wrong place, I don’t understand what is a more correct place to be.

if I’m in the wrong place, I don’t understand what is a more correct place to be.

The place is correct. There’s just no concrete data to work with.

Please post at least screenshots of the Syncthing Web GUI from all affected devices that would show both folders and devices, including Syncthing version information. Specific error messages and logfiles will be very welcome too.

glp-b85me is always broken, something in the OS is messed up and it stops responding to everything but ping. super annoying but I don’t think its directly related.

part of the problem is there ARE no error messages that I can ever see. just “out of sync” seemingly forever. often I get the conflicted files thing, which would be fine (id prefer to be able to get rid of that, but I get that erasing files automatically is not a good idea), but then some files will just be never changed again.

the part that makes me see red is that it tells me files are not in sync but will neither sync them nor ask me to overwrite them, resulting in more of a file compare tool than a sync tool… 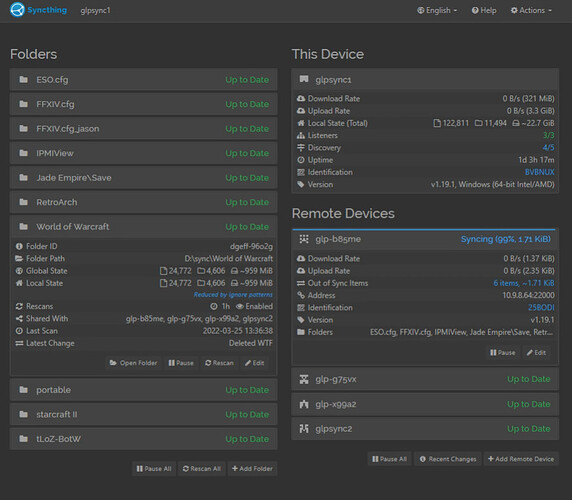 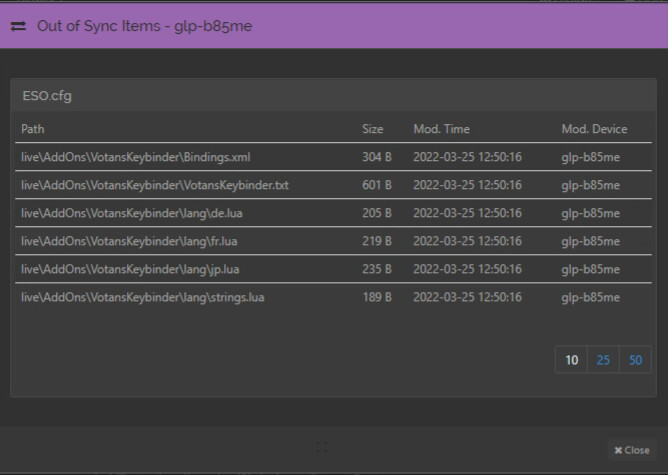 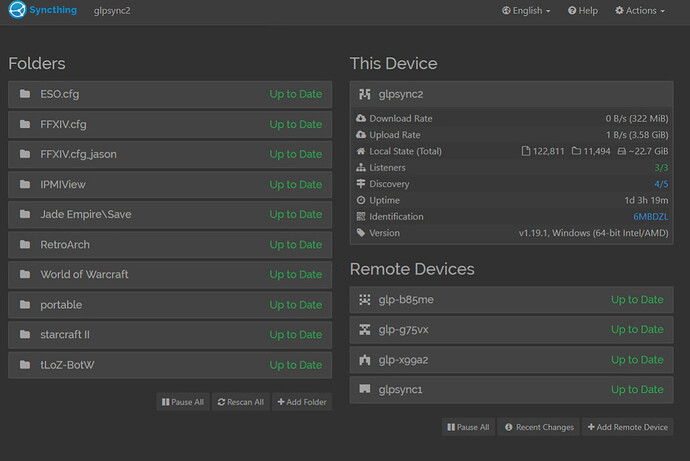 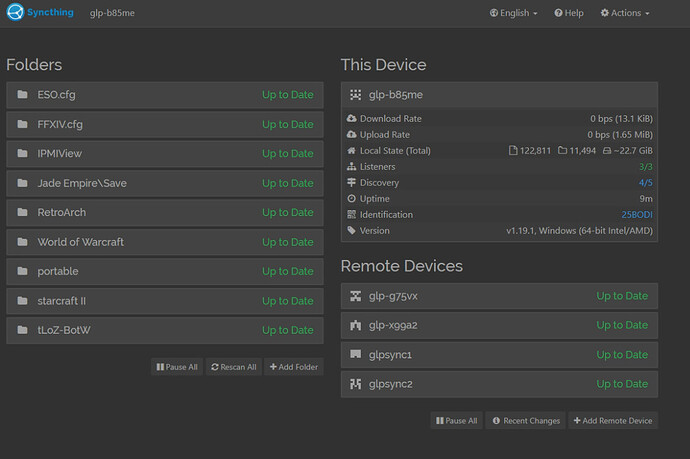 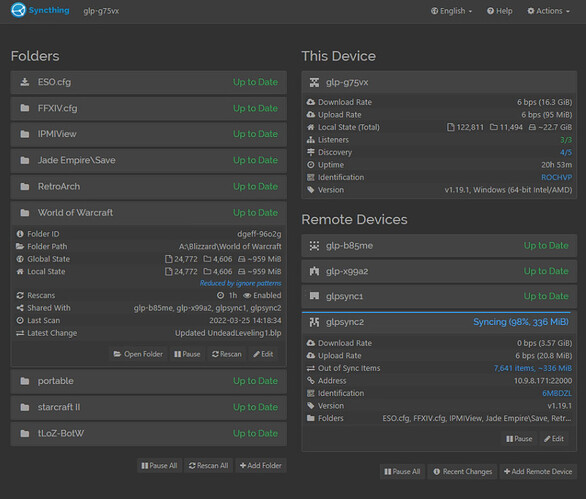 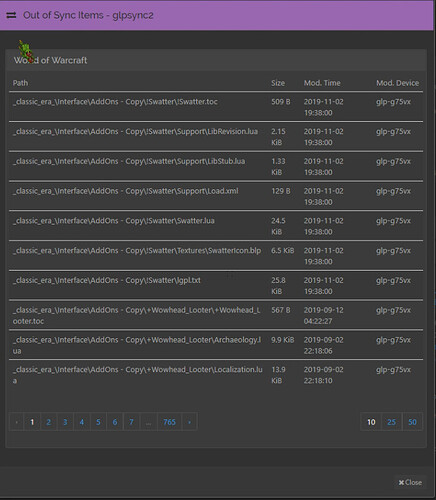 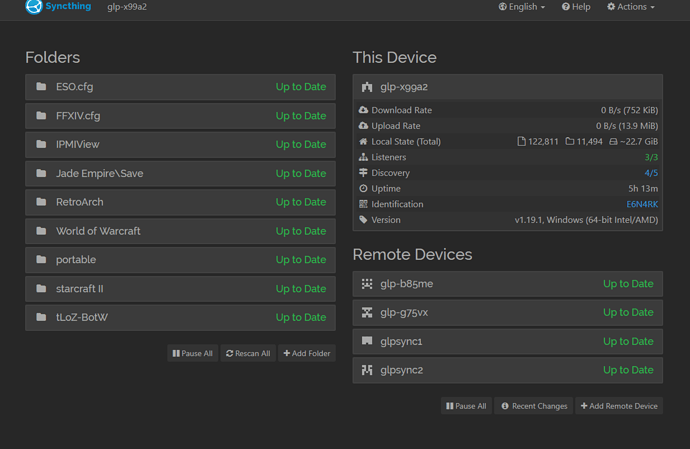 there are ignore patterns for the WoW, ffxiv, and ESO folders, intended to only capture the addons and setggins (WTF, savedvairables,.DAT), which are basically user data only. everything else is updated by the games patcher. 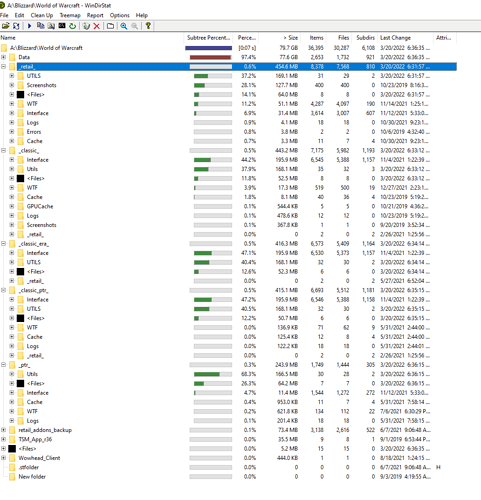 Yeah, so you it does appear that you’ve got some issues with files stuck in sync that aren’t being resolved automatically for some reason.

I’d just like to clarify a few things first. It appears that you’ve got five devices. Are all of them connected with one another? Is every folder shared between all five devices too? Is this an old installation, and if yes, how long has it been like that?

Also, if possible, please embed the ignore patterns listed above in code blocks using three “```”, as otherwise the forum mangles the output.

often I get the conflicted files thing, which would be fine (id prefer to be able to get rid of that, but I get that erasing files automatically is not a good idea), but then some files will just be never changed again.

You can disable conflicts by setting Max Conflicts in the Advanced Configuration to 0, but then Syncthing will simply overwrite any conflicted files with the newest modification, so please do this only if you know exactly that this is what you want and have proper backups in case some important data is lost.

bleah, I didn’t notice it mangled those that badly. I don’t seem to be able to edit that post? here they are again (quote doesn’t help, but [code] works in this forum),

been like what? unsycning? it does it apparently randomly. then ill fight with it for awhile, often resorting to deleting and restarting bits. this whole setup is probably…5-8 years old? I don’t remember for sure. I think I set it up when Syncthing was fairly new?

the most recent problems was that g75vx was at work and not syncing for awhile, but when I brought it home to get it all caught up, it just picked files to never try to sync.

I set them all to max conflicts 0. i swear I did this before, but they were all at 10, probably from my having to rebuild the systems or the folders to get things in sync. a global setting for max conflict = sure would be useful…changing it on 5 systems for 9 folders sucks… loosing any of these whole folders would be mildly annoying at worst. (actually, rebuilding my ESO addons setup from scratch would probably be a good idea, I just REALLY don’t wanna)

I dont really play world of warcraft, so could just delete all of that, but I’d really like to find out why I keep getting these unsyning out of sync items.

been like what? unsycning? it does it apparently randomly. then ill fight with it for awhile, often resorting to deleting and restarting bits. this whole setup is probably…5-8 years old? I don’t remember for sure. I think I set it up when Syncthing was fairly new?

Yeah, so being an old installation, I think you might have stepped on some bugs that have been fixed in the meantime. Unless you’ve rebuilt your Syncthing installations completely from scratch in between, the current setup may be kind of irreparable. I’m saying this as someone who also used to experience a lot of similar issues in the past, but everything has stabilised sometime around last year, and I haven’t really experienced any issues with out of sync items since then. I’m talking here about multiple setups involving dozens of devices each.

Just to be 100% sure that you start from a clean state, what I’d suggest to do is to sync all pending changes up first, then shut Syncthing down on all devices simultaneously, then wipe out all databases (simply deleting the whole index-v0.14.0.db folders will be the fastest way), then restart Syncthing on each device one by one, letting it scan everything before moving to the next device. Judging from the screenshots, you haven’t got that much data, so the whole process shouldn’t take much time.