I have a machine in Los Angeles, CA (Mac Pro) as well as a server in Barcelona, Spain (Unraid). I get extremely slow transfer speeds via Syncthing: 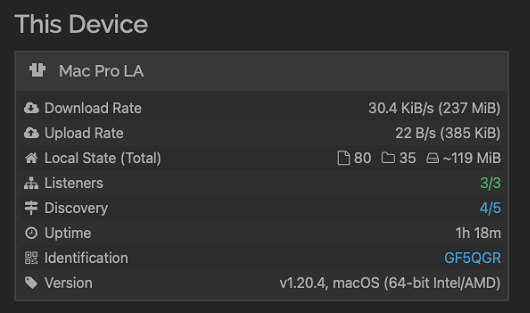 I figured that maybe that’s just the way it is when transferring files between continents but iperf3 tells a different story:

To be fair I don’t understand networking really well so maybe you can’t compare iperf3 performance to Syncthing? If iperf3 shows 171 Mbits/s should I expect similar transfer speeds via Syncthing?

Please check what type of connection is used to connect the two devices in Syncthing. You can do it by checking the IP address (and hovering over it with the mouse) in the remote device information on each side. If it’s through a relay, then the slow speed would be understandable.

Hi @tomasz86 thanks for the quick reply! I just checked and here is what it says:

Is that good or bad?

To shed some more light onto this situation:

I just installed Syncthing on my MacBook Pro in Spain and that syncs VERY quickly to my server in Los Angeles. So it seems like the issue is somewhere with Syncthing on Unraid.

Here you can see the difference. Both “Philipps MBP” and “Unraid BCN” are in the same location, on the same network in Spain: 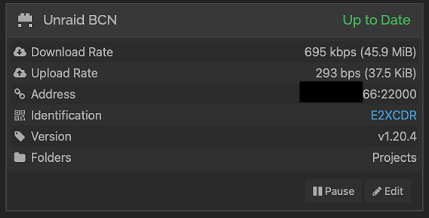 The MBP still isn’t as fast as what iperf3 shows me but it is way faster than the Unraid.

Uploading FROM LA to Barcelona shows the same: 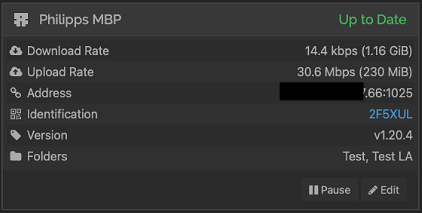 It’s going fairly fast to my MBP but very slow to Unraid.

PS: note that the ports are different for some reason. I don’t know why. I have only forwarded port 22000 on both routers (LA and Spain). I have not forwarded the port that the MBP is reporting (1025) which is actually the faster one…

For testing purposes I changed from the Binhex repository to the Linuxserver repository of Syncthings on my Unraid machine and that FIXED the Upload speeds FROM LA TO Unraid but FROM Unraid TO LA the speeds are still the same, slow speed.

Transfer speed is not just the speed of the connection. There is non-trivial per file overhead, so if you are transferring millions of 1kb files, poor speed is probably expected.