Current setup is a ‘master’ Syncthing instance on a Raspberry Pi (Raspbian Linux), with two Windows machines connected to it (but not each other). Every day (I think it is to do with when ONE of my Windows machines turns on and spins up Syncthing) a whole raft of old files and folders reappear. All machines have no file versioning, and ignore permissions turned on, and scan for changes turned off (scan interval is roughly 60s).

To be clear, I’ve taken the nuclear option to try and fix this:

I thought this had worked, but it has happened yet again this morning. I’m on the point of finding an alternative to Syncthing because it’s making work very very difficult! Any help/ideas would be appreciated, because I love the software otherwise.

Something definitely doesn’t sound right. I’d start with the following. 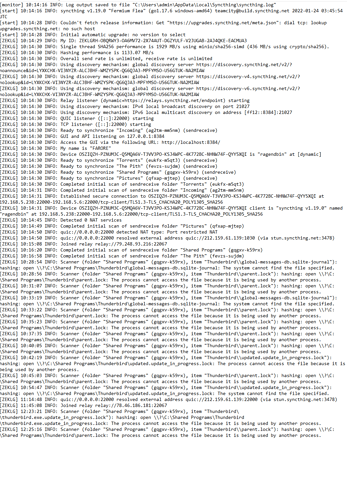 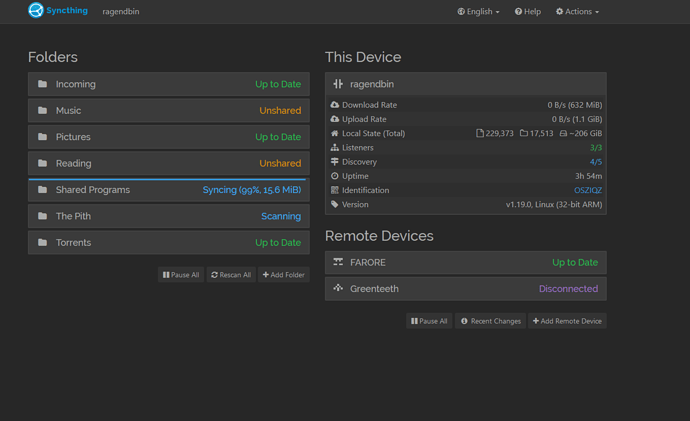 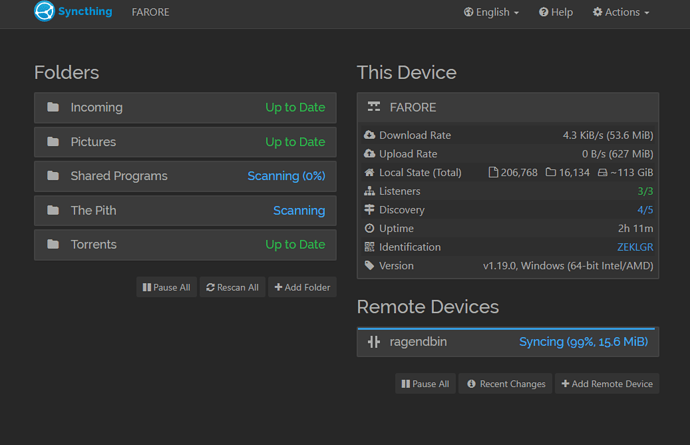 Syncthing does not have any folder named .sync by default. This points toward some other software accessing the folders which might be creating the files again?

Hmm… Perhaps this is Obsidian, then, which has a service called Sync. I will check - however, some of the files that are reappearing are ONLY found in the .stversion folder (including some of the Obisidian ones)

EDIT: Gah, the .sync file belongs to Resilio Sync, and which I uninstalled many moons ago (before swapping to Syncthing). However, I can’t see why it would be the culprit, as Resilio sync isn’t on any of the machines anymore? It makes sense that the .sync files would remain (this is what the Res Sync documentation says) but I can’t see how Resilio itself, uninstalled, could be caused the files to reappear. And my point stands above that actually a lot of the reappearing files are not in the .sync folder, but are in the .stversion folder (which is Syncthing-related)…

And my point stands above that actually a lot of the reappearing files are not in the .sync folder, but are in the .stversion folder (which is Syncthing-related)…

You mentioned there was no File Versioning enabled, but the .stversions folder is normally present only with it turned on. Can you verify that versioning is indeed switched off?

Does the fact that the .stversions folder keeps reappearing, then, point to something else reinstating it?

Would Syncthing reinstate files from an .stversions folder even if File Versioning is turned off?

I use Syncback to make scheduled backups of a lot of my drives and folders on my Windows machine. Usually this is strictly one-way (from the ‘live’ folder to a backed-up version on another disk), but for some reason ‘The Pith’ was set to sync between the ‘live’ version and the backup. This sync was schedule to run every two days, so I think what was happening was that when I turning on Farore (the Windows machine), Syncback was running automatically, and reinstating the files deleted from the ‘live’ version from the backed-up version.

I’ll have to wait and see if it happens again (I’ve now changed it to a one-way backup) but hopefully this explains this curious behaviour. Thanks for your help!