Syncthing can't parse IPv6 addresses with Unicode symbols in it

Just want to leave it here 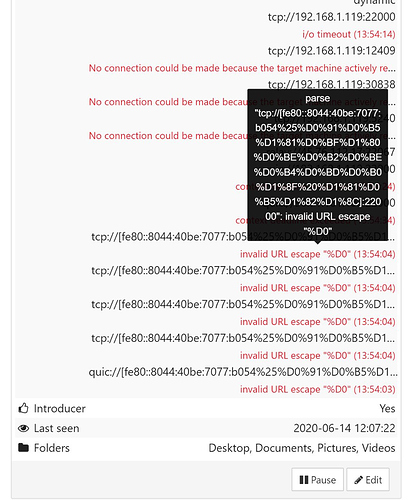 The interface (in Windows) is named “Беспроводная сеть” (in Russian), which makes locally-discovered IPv6 address something like [fe80::dead:beef%Беспроводная сеть]:22000 (which is still valid according to IPv6 specifications afaik). This is the default interface name with system language set to Russian, and I’d suppose you can have the same error in Windows (and other OSes) set to other languages as well.

Yeah… Go’s URL parser rejects this. AFAIK there’s no standard for extended characters in URLs in general, nor for zone identifiers specifically. Given this happens in practice I agree it should be fixed, but I suspect it’s an uphill battle, and not one I’m going to fight…