Syncthing blocks other devices from WiFi

I am trying Syncthing after using one of the original builds of Bittorrent Sync for years. I never had a problem with this bittorent sync however I want a current piece of software.

I’m current syncing files on 2 OSX systems in a 2 way sync setup. There’s a lot of data going through. When the sync is paused, my WiFi works fine. When it’s syncing, other devices using the wifi can’t get through to the internet. If I’m watching a video on another device it will continue to play until finished, but then it’s as if all outgoing connections are blocked. I’ve tested with multiple devices and it’s the same. The devices that are syncing with Syncthing still have access, but it’s SLOW.

Is there a reason or simple setting that would cause Syncthing to prioritize itself over other connections?

Nope, Syncthing doesn’t do anything actively. And if the systems are in the same network, it shouldn’t use internet bandwidth at all. It is possible that in case of heavy syncing (hashing) the performance of your device is impacted (mostly cpu or disk), but it doesn’t do it with higher prio, in the contrary it sets itself to a lower priority than standard.

I have 2 MacBooks syncing to each other, no other devices with Syncthing installed. When their sync is running, 2 phones and my xbox cannot access the internet. They will play videos to the end, but any outgoing connections are unresponsive. So when Syncthing is running, it’s blocking them from accessing the internet through the same wifi router.

The devices syncing are not noticeably impacted by the hashing.

Then you need to troubleshoot your network - syncthing doesn’t do anything special, simple tcp networking.

Ok, but my network is functioning normally with 7 devices and has been for years - unless I use Syncthing which I just installed yesterday. Do you have any insight on what to troubleshoot specifically? The router is an Asus RT-AC66U.

You potentially have weak/contended wifi and syncthing just consumes all available bandwidth. You can wait till it finishes syncing, or try using rate limits.

I do not have weak or contended wifi. My wifi is strong and can travel much farther than the location of the laptops running Syncthing. The ASUS router, while being a few years old, is high quality and it is not consuming all bandwidth, it’s got a total of 15 gb to sync and after leaving it on for 20 min only about 4 gb of the 15 gb has been completed.

I do not have a cheap, crappy, or slow router. I’ve been in the same location for 3 years and can get decent wifi signal @ 10x the distance I’m currently at. 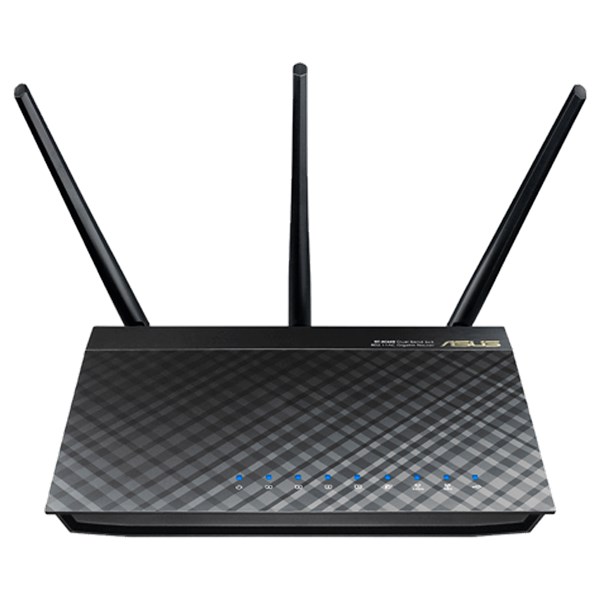 I don’t think you guys are grasping what happens. When I turn on Syncthing on the two laptops to do an initial sync of 15 gb (2 folders), it’s syncing slowly and this somehow cuts off outgoing internet access for all of my devices including ones that do not use Syncthing. It’s not slow and it’s only OUTGOING internet access. Incoming will continue at normal speed.

As soon as I pause syncing, all of my devices can access the internet again properly. I turn it on and outgoing signals stop, and whatever videos were playing play to end but then I get no further response from my attempts to interact with the internet.

If this was a bandwidth issue, why would Syncthing be taking so much longer to transfer 15 gb in 200 files than it takes me to transfer the same amount with other sync services such as BitTorrent sync (Version 1.4.111)? I mean I can upload to google drive multiple times faster than Syncthing is working.

You haven’t quantified how the devices are connected, (you can tell that from device addresses reported), if its non-lan addresses or relays, then it’s possible your router is not clever enough to understand that the two peers are on the same network (or local discovery does not work for some reason), and routes packets via router and it’s own wan stack, consuming the same bandwidth that you share with using internet.

This whole video continues to play argument is mostly moot due to buffering and other trickery. If you want a real test, setup iperf both ways to some machine on the interner and check the throughout as you start syncthing.

You can dismiss what I am saying, but I’ve seen this before.

It’s a bandwidth issue because links are asimetrical, you can have 100gbit download speeds, but if you have 500kbit uploads, and that is used by something, everything will be slow or stop working.

I suspect syncthing is starving the link bandwidth wise in some one direction.

The reason other tools might work differently is because they use different protocols which have different QoS which does not affect all TCP connections.

Please make sure that relaying is disabled in the settings. During Syncthing running you could also check the connection of all devices by pinging each other and see what happens.

Thanks, I’m not a tech professional, so I’m deciphering a bit as I go.

I updated my router firmware, and in this process I seem to now be able to access internet at normal speeds from different devices while Syncthing is running.

When I check the device address reported, am I looking for the IP address, MAC address? I’m not sure what to look for or exactly how to tell if they are being recognized on the LAN. Setting up iperf is beyond me…

Regardless, the internet is working now while Syncthing is syncing, but Syncthing is operating at 100-200 KB and there’s currently no other internet traffic that would slow it down. I haven’t messed with Syncthing settings, but see an option to limit upload and download speeds (they are currently set at 0).

Are these speeds normal? I checked my internet speed and it’s 24 MB/s down 5 MB/s up while Syncthing is running at this speed.

EDIT: relaying was enabled in the settings, I just disabled it but there’s no major change in speed.

You are looking for ip addresses. Anyway. A screenshot speaks a thousand words.

Both computers with Syncthing installed are running off the same subnet mask and identical IPs except for the last digits after the decimal. The IPs read: 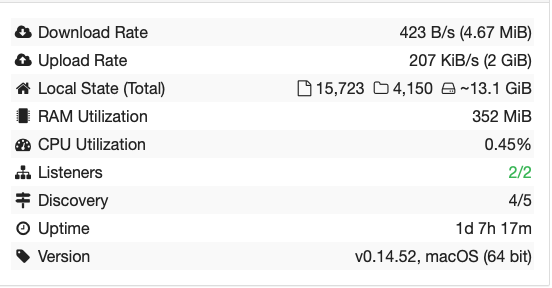 Is the subnet a local network subnet?

Anyways, given your router upgrade fixed the issue, not sure if there is anything left to answer?

The main question has been solved, another one has popped up.

For background, both computers are running right next to each other. I bought a new computer and flashed my old install to it, and will still use the old one for travel so I want to keep working files (folders like documents, downloads, desktop) on it, hence Syncthing. Both computers are on the same WIFI network with the same subnets. If they aren’t on the same local network subnet how could I find this?

I’m starting to think it’s the router throttling this traffic, but I’m not sure how to diagnose and I can’t think of a reason it would.

Additionally, in the task bar, when I hover over the icon, it states Running(offline) in one menu and then Syncthing Service(running) in the next, which seems contradictory.

So a screenshot speaks a thousand words. If you have ton of small files, syncthing will be slow, as the overhead per file is quite large.