I use syncthing (synctrayzor) as dropbox alternative between 4 devices (3 win, 1 android).

They all have only one Folder (Sync) and every one of those folders of any other device goes into the same Folder (with the Warning, this path is a subdirectory of an existing folder “x”). So every devices shares every folder to every device but it’s all the same folder.

Is this the right way?

It all sounds right, but you shouldn’t be seeing any warnings though. Can you post screenshots of the Syncthing Web GUI from at least two devices? If possible, with the warning message visible.

Do you, by any chance, mean that there’s one main “Sync” folder, and then all other folders go inside it? That can be problematic if you sync both the parent Sync folder and the child folders between the same devices, as it essentially forces Syncthing to do the work twice, which can lead to many unfinished transfers (and possibly other issues, as you’ve essentially got two folders competing to transfer the same files). Versioning with nested folders is also problematic. 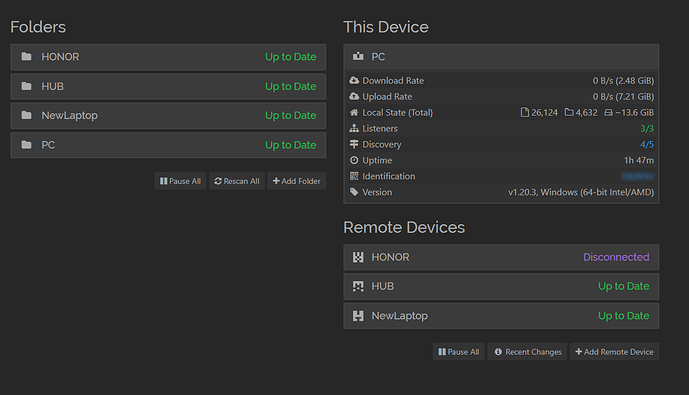 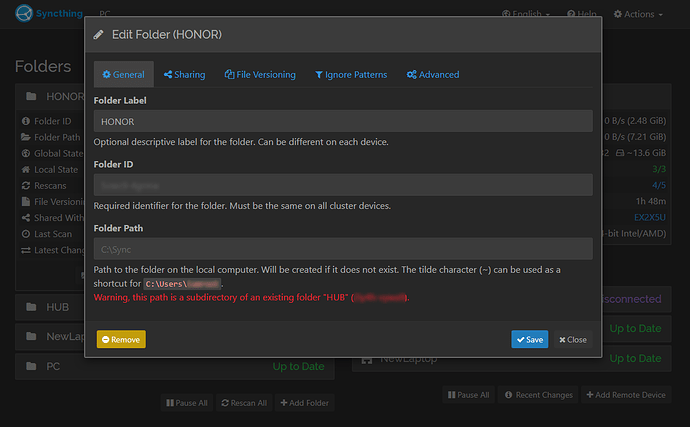 Every Device has the same folder on the same drive basically. Every time I add one of the other folders to the device I’m setting up, I just delete the folder path and paste in C:\Sync (because I don’t want 4 different folders and quadruple the space) So every sync folder goes into the same folder. That sounded the most logical to me because every device should check every other device for changes.

I’m running it this way for years and have constant problems with devices who never change files causing conflicts. And I can only chose the first file, no matter if it’s the latest. Clicking on anything else will delete the file from all devices.

It looks like you keep adding new folders under the same path to Syncthing over and over again, and then share each of them with only one device. While there may be some use in it (e.g. if you want to share the folder with a specific remote device as a different type), normally you’re supposed to just share the existing folder with multiple devices.

Please check https://docs.syncthing.net/intro/index.html if you haven’t already. Basically, it sounds like you should choose one of the four folders to keep, remove the other ones, and then share the one left between all devices.

There’s only 1x folder per device, but 4x devices. So e.g. “PC” has 1x Sync folder and the 3x other devices share their 1x Sync folder which all go into PCs C:/Sync folder.

This setup is identical on all devices. Maybe it added confusion that I didn’t post screenshots of the other devices.

All the tutorials show how to set up 2 devices…I get confused when a 3rd is added but I only want 1x folder.

Yeah, so for the sake of simplicity, I’d do this this way.

I did exactly what you described before, but did that 3 more times for every “folder” of every device in the network… even though there was never a second “real” folder.

Thank you so much!

Interestingly, syncthing-fork for android wouldn’t let me do it the wrong way. I never managed to get “all the folders” in there. Maybe someone should add that child proof way to synctrayzor for people like me

Glad the issue’s been fixed

This is tricky, because there’re legitimate cases where you may want to share the same folder twice (e.g. as Send/Receive Only with specific devices). The warning message should probably be better though, as here it was technically wrong. The folder wasn’t “a subdirectory of an existing folder” but it rather pointed at the exact same path.