i’ve got two client with a shared folder that are stuck on 95% with 0B to sync.

Im quite at a loss what could be the issue here, if there is an issue at all. Is there any way (log) to check if there is out-of sync files or could this be an ui bug of some sort ?

Screenshots from both sides would help. Are ignores the same on both sides?

The folder contains mercurial repositories, and i have the .st folders and files ignored from sync. stignore is only present on the sending side. 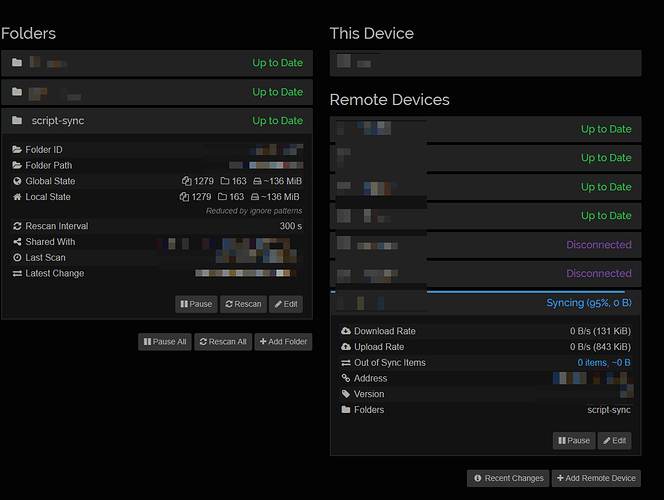 Sending side: out of sync items 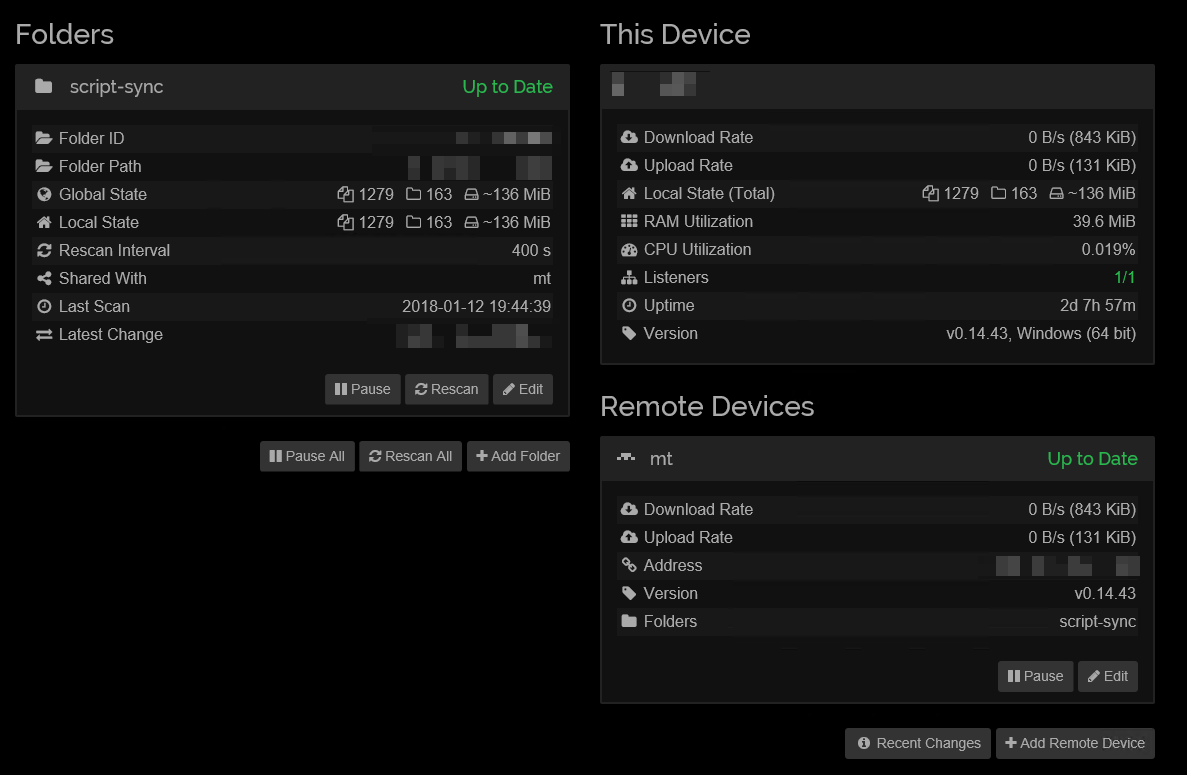 That means that you have deleted something on the sending side, that was not yet deleted on the receiving side - do you use the ignore deletes option?

The out of sync items display for remote devices does not handle deleted files - thanks for uncovering this. See issue and PR.

Nope, wasn’t even aware of that option, but rechecked both sides nonetheless.

Hmm, no idea what the problem is then. Can you run curl -X GET -H "X-API-Key: yourapikey" 'http://localhost:8384/rest/db/completion?device=deviceid&folder=folderid' | json_pp on the sending side with the device id of the receiving side? That should list the file that it thinks is missing.

The output unfortunatly does not list which file is needed, but it is indeed a delete:

If this ever comes up again, here is the powershell equivalent of the curl command:

Sorry, I stated the wrong endpoint, it should have been /rest/db/remoteneed (all parameters are the same).

Thanks, it was web.config that is in my .stignore. Resolved the issue by:

Everything synced up now

I’ll be sure to utilize the rest api in future for self-debugging.

So is there a bug, or is there not a bug @imsodin?

There is at least one bug, that I reported and hopefully fixed (as in the linked issues and PR). That a file that was ignored was reported as out of sync might be one more bug, but given the information available I can’t be sure. And given that mt7479 already resolved its issue, it is not likely that there is going to be more evidence to dig for another bug.

Sorry for jumping the gun on this one. But since ignores where involved is assumed the error is likely going to be on my side.

If this ever occurs again i’ll will report back and we can do proper debugging without prior intervention on my side.