Stuck at Syncing (95% 0 B) after cutting file that was not accessible at remote. Solved.

I know this issue has been around since at least 2 years now. I encountered it again yesterday. I solved it for myself without reset of deltas. Maybe your setup is different, so maybe you need to do different things, but the following is what happened to me and how i solved it: 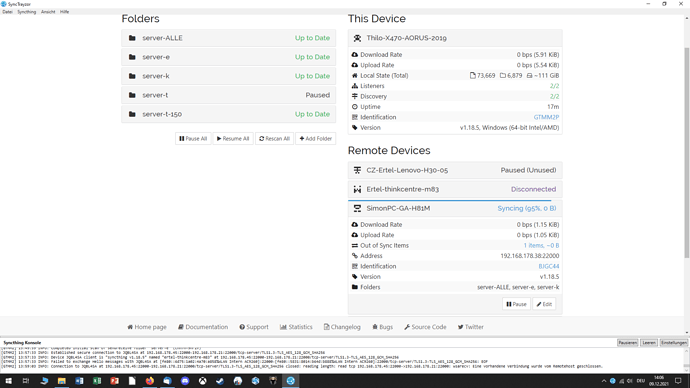 The ones that were online at the time:

What was done that led to the current state:

I am happy again.

Thanks for posting that – but I cannot figure out what you are saying is the solution. Would you mind responding with just the steps to solve the 95% 0B problem set out alone?

I repeat this worked for me, but may not work for you, as 95% 0B Error might be triggered by multiple causes. I am just a user, i don’t know about the code. Above you see what triggered the error for me personally.

To trigger the error it basically comes down to trying to manipulate (a large?) file at the same time with two different devices, which makes Syncthing go woooo.