Hi there! I’ve been using Syncthing for about a year to sync my documents folder between my desktop and laptop. I recently rebuilt my computer and got a Synology NAS, so I installed Syncthing on the NAS to serve as the new host for my files between the desktop and laptop. I migrated all my files to my NAS, and then shared them with the desktop to pull everything down.

However, I have since made a change locally on my desktop, but it seems to be stuck at 99% in syncing back to my NAS. Any ideas what might be causing this issue, or how I can resolve it?

On Synology, you need to enable the “Ignore Permissions” flag for each folder, otherwise it messes with the ACL system. If you didn’t, it might cause such trouble.

Any reason why you don’t upgrade to a more recent Syncthing version on the DSM? Where did you install it from?

Hmm, I went through and ticked that box for each shared folder on the NAS side of things, but no dice. In Synctrayzor on my desktop, it just lists the two new documents, but on my NAS it lists a bunch of files. The Desktop says it’s up to date, but the NAS lists my writing folder as out of date. Any ideas?

I’m not sure, I thought I did a manual install, but that’s what’s listed in Package manager as well; could just be the latest version pushed out by Kastelo? Could that be causing issues?

Just strange that I was able to go from NAS > Desktop fine, but now won’t go backwards.

The two versions are not entirely compatible. The ideal is to install the same version on all devices, that would currently be v1.14.0. Thus also on the Synologys.

I recommend that you set up all folders on your Synology with “Ignore Permissions”. By the way, since v1.14.0 you can also save this as a default for setting up folders.

Install the Synology Package as follows:

Before is needed to uninstall the package from Synology.

Just to clarify one statement, the gist of Andy’s post still holds (use up-to-date versions on all devices for the best experience).

The two versions are not entirely compatible.

There’s no incompatibility between v1.3.4 and v1.14.0 - all of v1.x.y are compatible with each other in the sense that they can connect and sync.

Difficult to describe. Compatible, okay, I think the development v1.3.4 → v1.14.0 surely limits the compatibility. The question would be where these are.

The issue seems to be further, what is the root cause of “stuck at 99%”?

What the heck is this forum msg: This topic will close a few seconds after the last reply.

But is not closed…

Okay, so I should uninstall Syncthing on the NAS, and reinstall using the process on the link. Is the version I have on my desktop okay? And then, since I want to use the NAS as a host, but both have almost the same files, barring the handful of new ones on the desktop side, which direction should I share folders? Does it matter?

I don’t know anything about sinology packages, can’t help you there. Others here probably can.

If you “just want to sync”, just use the default setup except for ignoring permissions.

I think I’m all clear on uninstalling and reinstalling to a new version, moreso just asking that since I want the NAS to be the most up-to-date version, but both locations have almost everything except for the handful of new files on the desktop side, once I add the folders to the NAS version again, if I share back to desktop, it will just scan and attempt to copy the new files back, correct? Just don’t want to make a duplicate folder or anything.

You can uninstall v1.3.4 without hesitation and, after storing the package source in DSM, install the current v1.14.0, which then appears in the DSM’s package center. After assigning the folder rights in the DSM, connect the folders as usual, it doesn’t matter if content is already available.

Set “Send and Receive” for both folders if have different contents. If, however, a device has the full content, you can set this side to “Send only” when you first set it up and then, when the first comparison is done, switch to “Send and Receive” so that both sides have this setting when you want that.

If you use “Send and Receive”, it is conceivable that “conflict” files occur during the first synchronization, which can then be deleted. Otherwise there is no duplication of directories or files. If you want to be sure, make a backup of your data beforehand.

I’d add to that, Syncthing on DSM is available from two different sources, neither of which had v1.3.4 as latest at the time of your original post. So it’s not clear to me whether a switch is actually necessary to solve your problem.

The version from SynoCommunity leaves Syncthing’s internal auto-updating mechanism intact, so even though the Package Center possibly said v1.3.4, you might still already be on the most recent stable release, v1.14.0. Just that no new SPK package was necessary.

The version from Kastelo was initially published for v1.3.4 AFAIK, so if you never updated through Package Center, that might be where the old version came from.

Anyway, both versions are compatible, but of course some bugs were fixed in between. So a “stuck” sync could be caused by an already resolved issue. Whatever way you choose to upgrade, be aware that a simple uninstall will also discard your configuration and database with the SynoCommunity package! So only do that if you have a backup or don’t care about starting with a clean slate.

According to that, there are 3 packages can be install via the package center. 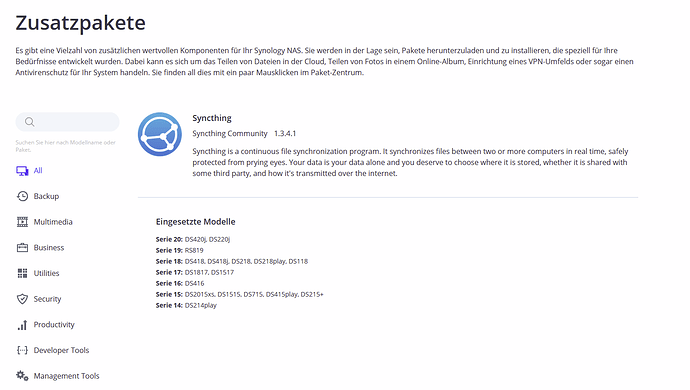 @calmh seems like the version you sent to Synology for publishing (which took ages) might be causing trouble because people are stuck on that ancient Syncthing release: Syncthing - Add-on Packages | Synology Inc.

Do you think it would make sense to withdraw that from the official Synology package store?

An updated SPK for v1.14.0 is in the works: syncthing: Upgrade to v1.14.0 and ignore folder permissions by default. by acolomb · Pull Request #4527 · SynoCommunity/spksrc · GitHub

Yes. I asked them to do that about six to eight months ago.