I would like to bring these ideas into discussion.

@Performance/Status: My focus is on low power consumption and I’m fine with my Raspberry-setup. But I would like to get a better visual feedback inside the gui like provided here. 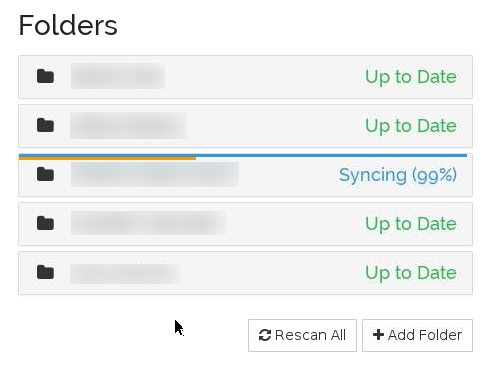 I sync lots of data and in the example it said 99% for hours (~9GB/1400GB or so). So I would appreciate a second transfer status bar in addition to the overall sync status.

@Security/Integrity: I like Syncthing for its security orientation, but I do have concerns for file integrity as well. Any synchronous syncing may have bad impacts on undesired deletion or i.e. encryption by a virus and the like where a user noticed bad things too late. In my mind came some sort of “Archival Lock”-Mode. So it would be possible for every device to promote new files and changes to these files, but after some time set by each user, files older than that mod-date would be “safe” against probably unwanted changes. Therefore any change would be restored from the cluster. This could be combined with some mailing functionality, where Syncthing informs about occurring conflicts/problems. Then a user can suspend/reset this mode.

Anyway, only some thoughts. Thank you guys for this great peace of software!

I would appreciate a second transfer status bar

It’s not that simple.

it would be possible for every device to promote new files and changes to these files, but after some time set by each user, files older than that mod-date would be “safe” against probably unwanted changes.

You may be able to rig something similar by using the staggered versioning scheme. It’ll cost a little space though as this is essentially just a way to keep old copies around.

(A better way is something like ZFS snapshots or Windows shadow copies.)

You can click on the “Out of sync” text as it syncs, which will show you per file progress, as well as the file queue.

Thank you for your replies. I’ll will try the versioning scheme, but this would mean I need more space and maybe a lot traffic is triggered which I did not want in the first place. Anyway, I still hope the best and nothing stupid/worse happens