I’ve got two Dell servers on a LAN syncing at a rate of about 1.00 MiB/s. I’ve read through the FAQs and read quite a few posts on this subject, but have not found a solution.

This is the folder being synced:

The server called Stella is the “source” where all the current files reside. They are being synced to the server called Tank, which started out with an empty folder. The sync rate hovers around 1.00 MiB/s (it’ll jump up to say 1.7 MiB/s then fall back to 800 KiB/s). When simply copying the same folder from Stella to Tank, the transfer rate is between 10-20 MB/s. 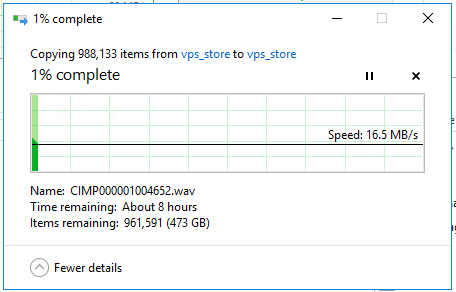 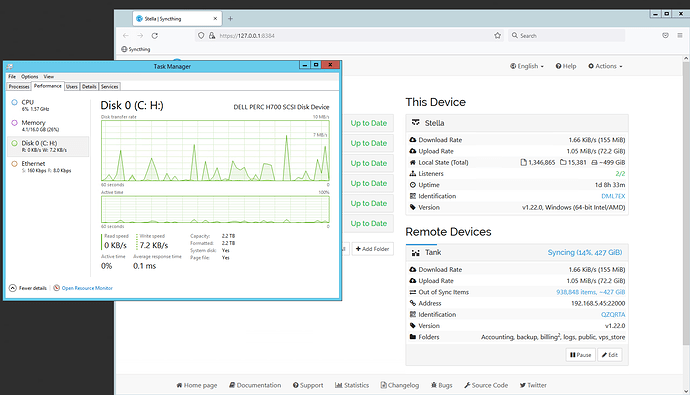 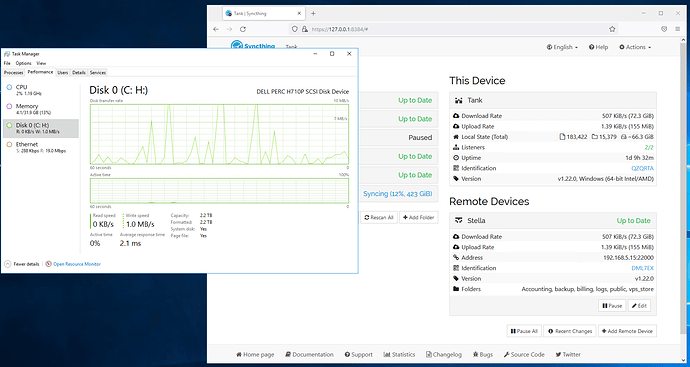 Any ideas what can be done to speed this process up? This is a secure environment, so if disabling security features would speed it up, I’m fine with that.

You seem to be syncing very large numbers of small files. In that case, it’s expected that Syncthing will be slower than other tools (which includes Windows Explorer seen in the screenshot). For why, I’d suggest reading the whole thread at https://github.com/syncthing/syncthing/issues/8602.

I think the only possible but not really practical method to speed things up would be running multiple instances of Syncthing, separating your folders between them.

This is a secure environment, so if disabling security features would speed it up, I’m fine with that.

Syncthing doesn’t really allow to disable any security features, so there’s nothing to tweak in this regard.

Thank you for the incredibly fast reply!

I get it. I’m all for reliability and correctness over speed.

A proper CAT5 cable should handle a gigabit connection. But you can check your bandwidth with iperf3.

I think the only possible but not really practical method to speed things up would be running multiple instances of Syncthing, separating your folders between them.

Why do you think that would help?

Network speed almost certainly is not the limiting factor here, but syncthing DB ops, FS sync or other per file overhead in syncthing. You can’t compare a simple copy operation with Syncthing syncing.

On what storage is the syncthing db located?

There’s no security setting to disable (nor would that help), just a bunch of safety (as in data) ones. The only might be recommendable is after setting the folder to receive-only, disable fsync until it’s synced once. Then re-enable it.

The Syncthing DB is located on the same RAID, different partition.

I didn’t expect Syncthing to match the copy speed. I’m aware there is overhead. I just didn’t expect the sync rate to take such a big hit considering the average file size is 500K (which I don’t consider “small”, but guess I should in this context).

I suppose when dealing with a large number of files, the best approach would be to get all devices as closely in sync as possible manually before introducing Syncthing.

Why do you think that would help?

Because I tested this.

Syncthing DB is located on the same RAID

The DB should be on another drive, ideally on an SSD. A partition is only a logical separation.

Echoing @bt90, a lot hinges on database operations so Syncthing becomes very sensitive to database latency. Spinning disks are not the thing to have there, regardless of RPM and RAIDness. And as mentioned, a lot of operations per file (including multiple synchronous writes), so small files will be slow – again, especially on (comparatively) slow storage.

Having the DB on another physical drive wouldn’t hurt, but I doubt it’s a significant factor.

I turned on all the logging facilities to see if that might shed some light on what’s going on. Below are log entries for a single file being synced. I removed the entries where it seemed to be moving along nicely.

It takes about 800ms to get from GetGlobal to ItemFinished. Then there’s a 2.5 second delay before ‘insert (local)’.

Having the DB on another physical drive wouldn’t hurt, but I doubt it’s a significant factor.

Where does the doubt come from?
The logs are also consistent.
Also you get input here from people running syncthing and supporting users for years - always good to do your own thinking and be critical, but nevertheless it’s worth giving some weight to that. Btw. I have my db in memory, which I didn’t do out for fun (still there as it still works, even though I now can afford SSDs).

It just seems that with all the other time consuming work that must be done for each file (read from network, hash, write to storage) that a few DB queries would be relatively insignificant.

I’m in the process now of getting a benchmark for the number of files synced in an hour running on spinning disks. Then I’ll run it for an hour on a RAM disk.

It’s a bit of both, but it adds up. That said, for most people who run into the “sync one million tiny files” situation, it happens approximately once per installation – on first sync. That’s not nothing, but it is a one time pain that will pass and which be worked around by doing the initial sync using simple file copy or similar and then letting Syncthing take over. Syncthing is certainly not the fastest tool if what you want to do is move lots of tiny files from A to B, but hopefully that’s not the long term use case.

For the RAM disk part of the test, I moved all the Syncthing runtime files, including the DB files to a RAM disk on both machines.

That’s better than a 10% performance gain! I expected a boost, but not that much.

Thanks to all the people who went out of their way to help me. I sincerely appreciate you all taking precious time out of your day.

Syncthing is certainly not the fastest tool if what you want to do is move lots of tiny files from A to B, but hopefully that’s not the long term use case.

This is a one-time-pain deal for sure.

You might also want to try disabling fsync. It’s not safe in case the process is killed or loss of power, but gives another point of measurement.

I tried disabling fsync. Not much change. Actually slowed down a bit.

This is a good article. Near the bottom it explains a “failed” Cat5e or Cat6 cable.