the “downloading device” shows file transfer- and updates… but could syncthing show uploads too? (on the device that’s uploading files) it only shows the progressbar on the right side…

Other devices grab blocks, not files. We could show files from which blocks were fetched in the last few moments or something like that. It doesn’t tell you what else that device is doing though, as it may be downloading other blocks / files from someone else.

I’m not sure if I got what you meant… If dev1 is downloading some stuff from dev2, dev1 shows some filedetails and the downloadqueue - but:

So you want to introduce the user to the concept of blocks? That seems like a bad idea.

D and E are both wrong though: A has NEVER downloaded the file from D, and is NOT currently downloading it from E.

downloading fileX from B,C (not showing the single block)

But… Should it matter that A decided not to download the file from D and E? The people looking at D and E may think that A isn’t fetching that file, when it fact it is - just from B and C, not D and E.

Do I get it right? Why should people look at D and E for getting some info about what A is fetching? Each device should show the relevant information of this device - means down and uploads and from/where to it is down- and uploading… that’s it

The other thing is, this downloading from A, B, C doesn’t scale once you go past 3-4 nodes per cluster, turning it into a UI disasster.

As calmh suggested the best thing we can do is show info about the last N requests. That doesn’t mean we should make any assumptions about uploads and say ‘Oh node X is downloading file Y’ as this woukd be insonsistent across the cluster, and list it purely as list requests to the curious ones.

Our friends from “the other Sync Tool” just shows the Overall Progress (Per Directory) -> Percent, Up/Down Rate at the Main Dashboard and for Users which want to know more, a Detailed list (Just Number of Upload/Downloads per Peer Device + Filename) 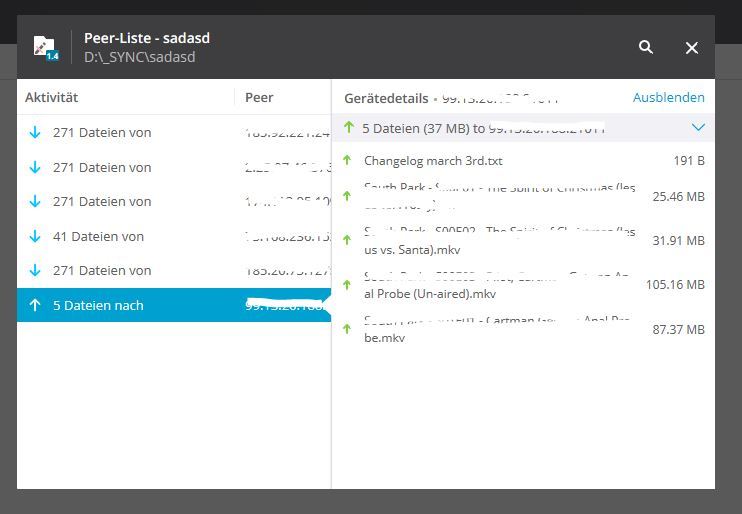