On all devices in the cluster, the other connected devices show as “Up to Date” - except for 1. Viewed from the Synology device GUI, the Android phone is stuck at “Syncing (100%)”.

No amount of rescanning or restarts seems to clear this - although files are syncing properly.

Appears to be a cosmetic glitch. I can’t prove cause and effect, but this was introduced after upgrading the cluster to v0.14.22. 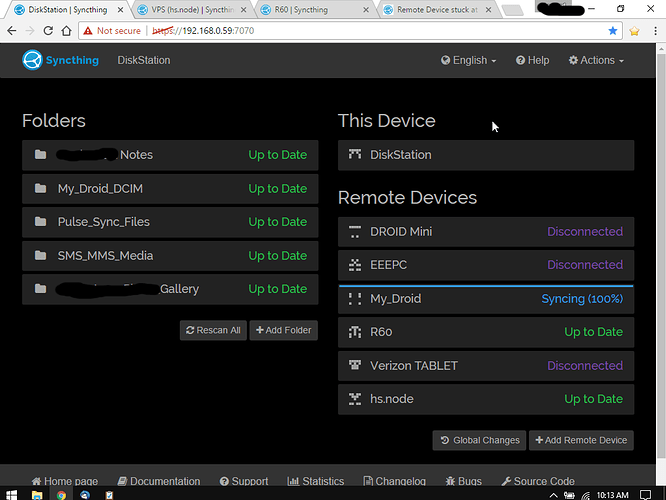 Yeah this is fairly known, there are a couple of common causes (mostly ignore patterns) but in the end it’s some kind of bug. There’s a hundred or so topics about it here:

I was able to solve this, and restore the “Up to Date” status.

The “100%” issue was on the Android phone as viewed from the Synology NAS. I don’t use ignore patterns, versioning, or Master:Slave with the folders in this cluster … so instead I did a manual search of the files on the phone looking inside the synced folders.

Sure enough, there was a single file in the Denzettel (Android note taker app) data folder with a wonky file name, and no recognizable file extension. Probably created by a Denkzettel bug / hiccup. As soon as I deleted this single item and restarted ST, the folder was “Up to date” on all devices.

Not entirely sure what happened here, but I am guessing that the NAS wouldn’t or couldn’t sync the malformed file from the phone.