I’ve had a look around the forum and Issues list and, whilst I can see this has cropped up from time to time, I can’t see an open issue for it:

Despite all my nodes having a common set of ignores, I see radically different sync states in the Remote Device list.

For example, here is are two views of three nodes (I promise, it’s the same three in each case) as seen from two other nodes: 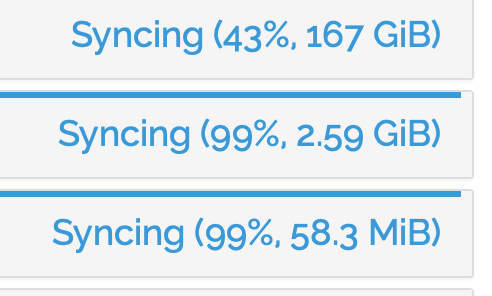 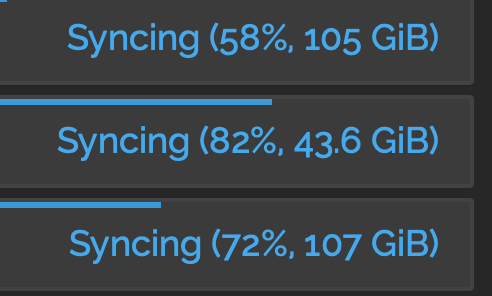 I’m not able to log into them just now to check, but I’m as confident as I can be that they’re fully in sync. Certainly, looking between these two nodes, they don’t see a consistent view of each other.

Am I alone in this?

Search existing forum threads, the steps how to debug this have been provided tens of times before.

Ok - I’ll have another look. From what I’d seen so far, it was due to mismatching Ignore Patterns - which isn’t the case in my setup - but I’ll dig further.

Thanks for the feedback!

Mismatching ignore patterns aren’t are reason for incorrect sync percentages anymore. Running -reset-deltas had success in the past, even though that’s weird because upgrades should do that anyway. Or if you ran 0.14.52-rc.1/2 and did bigger changes then, I might have broken your db a bit, but I don’t think that’s the case for you (?).

Ok - I won’t continue looking at Ignores then!

All machines in this delta are running automatic, stable updates - so they’re all on 0.14.51.

I updated the macOS host wrapper yesterday on one machine, and that caused the Syncthing binary to briefly revert to 0.14.49, until it automatically updated a few minutes later. I don’t know if the Remote Devices had not had chance to fully report in during that time, but whilst it was on 0.14.49, the Remote Devices were displayed as being Up To Date.

I’m happy to dip back down to 0.14.49 on a machine or two again as a test - if it won’t break things, and if that would be a useful troubleshooting step.