Question: How to check global state vs local state difference

Hi, I have a master-slave configuration with only two nodes. Last week I had a couple of problems:

So my question is: Since the global state shows more file than the local one, and since I don’t have any clue of what those 2GB could be, is there any way to get a list of changes between local state and global state? I thought that this would be the behavior of clicking on the “Out of Sync Items”, but as you can see this is ~1.50KiB and if I click it shows me a list of folders which are already present on my master device so those 12 folders are present and I’m now wondering where the ~2GB are from, maybe files inside of them? But in this case… which files? I’m now afraid that some files are missing from the mounted disk, but I don’t know which ones.

Given that they don’t show up under out of sync files, it should be files matched by your ignore patterns. Which files those are is not visible in the GUI unfortunately.

Given this ignore pattern… how could it be 2GB? 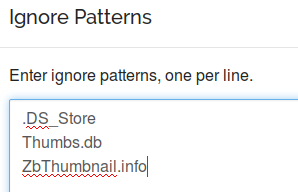 I checked the existing files ignored by the sync and the total space is below 30MB for the folders that contain them… so 2GB for 12 folders it too much for my ignore path. Will they show up if I clear the ignore pattern and do a scan? Will I have the complete list of differences in that case?

Gone… unfortunately while changing the settings for the ignore pattern and rescan frequency (since the scan button is not available when there are changes to override) it seems that something has triggered a change in the Global State which is now set to 129 with only the small 1.5KiB difference. I’ll probably never know what was triggering the 2GB of difference in data… with or without the ignore pattern the size of the data is still around 129GiB and the file count only differs about 100 items so I’m still missing >400 files