PANIC - Out of memory while [Overrride Changes]

First of all: I checked https://github.com/syncthing/syncthing/issues/ first but did not find a similar issue (searched for panic and memory)

Secondly, it might be that what I’m trying to do simply isn’t possible. I’m running syncthing on an (old) Atom N230 system with only 2Gb of ram running WindowsServer2008, 32bit, yes I know it does not makes sense =) but it only runs Syncthing and CrashPlan and has been working fine for years. Most of the time the memory usage hoovers around 800Mb and although the CPU isn’t very powerful when it comes down to hashing etc, it’s I/O subsystem is sufficiently adequate to make it work. In total I’ve been syncing between 1 and 2 TB between that machine and another one across the internet. Like I said, this has worked fine for a very long time. Thank you very much for such a nice piece of software!

But… recently one of the larger folders got out of sync and I’m not sure why. Although the folder is “Send Only” it shows the button [Override Changes] 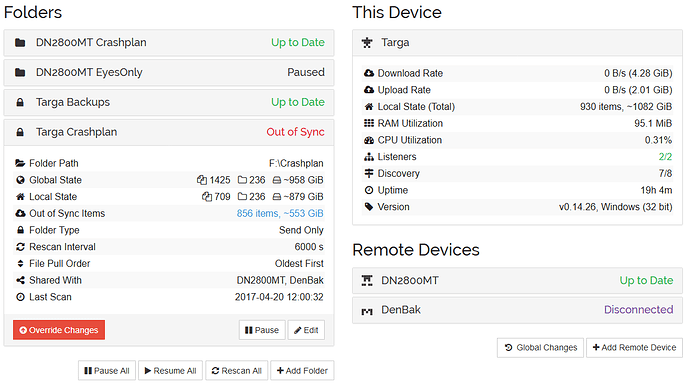 Now, when I press this button memory usage goes through the roof quickly and within a minute or so Syncthing throws out a panic log and restarts. 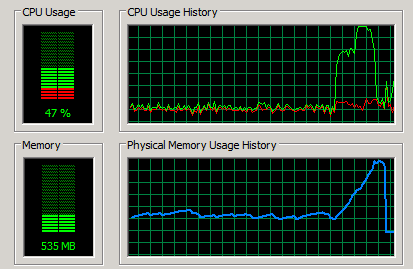 This happens every time I try to [Override Changes]. Reading this post the issue might be related to something related with the Weak Hashes. I could try to apply the proposed fix and trick the system into not using Weak Hashes and see where this brings me but I was mostly wondering if it would be useful for you guys to have me try something else first? (I probably could take a backup of %APPDATA%\Syncthing first so we can ‘revert back’ to the ‘bad situation’ if needed?)

Thanks upfront for having a look at this, Roby

PS: only now just realize that I had ‘is:open’ as a filter on github, sigh… want me to move this post over there?

The 32 bit version of Syncthing can’t allocate more than 500-600 megs or so of ram and is liable to run out of memory like this. That said, override changes should probably be able to do this with less memory, so feel free to file it. It’ll be an enhancement for some time in the future though. It’s roughly the same issue as #2250, which is somewhere on my list of things to take care of.

Thanks for the heads-up.