I have just created a new folder on NAS which is shared with multiply deivces. And im getting “OUT OF SYNC”

How this could be solved ?

It seems the file name is not valid on the filesystem where you are trying to sync it. For example, on windows you can’t have file names with colons in them.

You can rename the files.

can i Ask you about exception there isnt any inormation in documetns - it should. Where should i put exception of files which i do not wanna to sync ? On device where folder is Hosted(master, root) or on every device which im sharing the folder

The ignore patterns and how to use them is explained in the docs.

can i except hidden files ?

No, it’s name based. On Unix “hidden” files are files that start with a dot, so in theory yes, but not on windows.

ok then, ive deleted this folder but im still seeing out of sync

its just a popup but you know it enoying

Should i wait or restart some service or else ?

What popup are you talking about?

Eventually these things should disappear, if you actually deleted the files listed in that list.

Ive got a few devices in which im sharing one folder. NAS->WINDOWS and android. everywhere folder is setup as Receive/Send. But since then ive got some issue. Cuz some files cant be synced Pls see screenshots - MOD.DEVICES means that those files are there or what ? 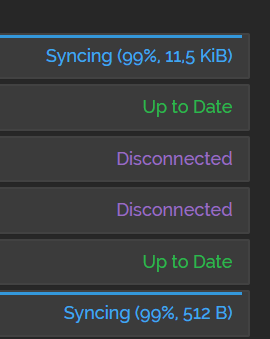 Przechwytywanie2828×237 7.46 KB
Cuz ive checked devices and there is no such files. Also, IGNORED files → where this should be done. On root folder( folder from where is shared) or on every device ?? thank you very much for understanding and help

Mod device means the device that last modified those files, where modified can be create, modify, delete.

Also you have not specified what version you are using on each side, you have not provided a full screenshot, just some excerpt of a dialog where it’s not clear which dialog you are looking at, just filenames, which are the least useful piece of information.

I am still not sure what you are trying to achieve. Ignores work on both sides, for both send and received items.

Also, it looks like you are looking at device X being out of sync from within device Y. If you want to know why device X is out of sync, check the UI of device X.

How is this thread any different from OUTofSYNC? Also don’t use caps lock.

Yes thats also my post. Some how i just forgot tha ive created one… Ill delete it.

What im trying to achive is to get rid of notice that device is still syncting some data. on each side im using v1.4.0. 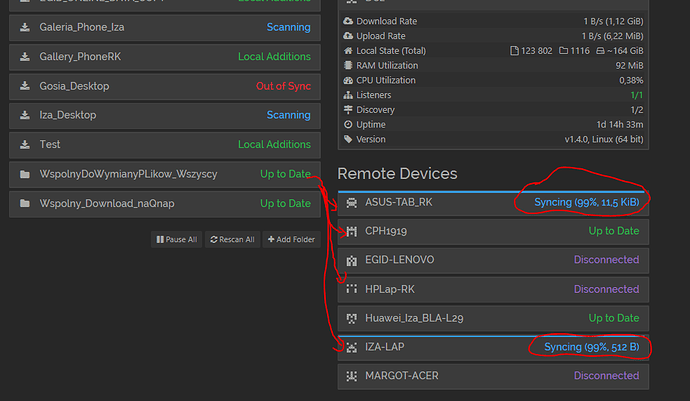 Przechwytywanie3983×572 51.8 KB
One folder is “OutOfSync” but its ok. But as you can see there are two devices that got stuck at syncing. First device "Asus_TAB_RK → ive checked which files are cousing problem and those files doesnt exist on the machine, so if not exist so why it stucked ? i hope now its clear a bit what the problem

You should check the ui on the other side.

Yes, it’s out of sync, but you won’t know because we don’t report errors across devices, you have to check locally.

If you’re not sure what you are looking at, post the screenshots from the other side, preferably with the folder which this device reporting missing files for expanded and visible in the ui in the other side.

Also, expand the same folder on this device and post a screenshot.