Out of Sync - Syncing becomes extremely slow at some random point

Hope i can get a little help with my problem. Here it goes. I setup syncthing for the first time last week on 3 different devices. Easy to setup. 2 Windows and 1 Macbook. and they synced with each other well and fast, between home and office.

But for the past 3 days sync starts well and shoots to …say 70% or 90 % or even 98% and then all of a sudden it becomes extremely slow and takes hours to finish, updating 1% at a time. It just shows the ‘out of sync’ folder.

70% might mean it has 70% of the data since last update, which does not necessarily mean it has transferred 70%. The transfer speeds are shown on each device, and if you click on the “Out of sync” link it will show you the progress of downloads. Furthermore check that you are connected directly and not via relay (in details of each device it should not say “Relayed via”)

Anything in the logs? Are you connecting through a relay for some reason?

Thanks for the prompt response.

Actually, yes. On both devices it show that Relays 1/1 on the details.

Does this mean i am connected through a relay and not directly?

How then connect directly?

If there is a way i could attach the screenshot. Afraid of breaking the rules here.

If you expand the remote device it will show you the address. If it is just an IP, you are connected directly. But if it says “relayed via …” you are connected over a relay, which are normally limited to 100KB/s.

You can drag and drop images or paste it after copying it to clipboard.

You can just use the “upload” button here.

Or drag a picture into the composer.

Thanks Jakob :-)… here the screenshot 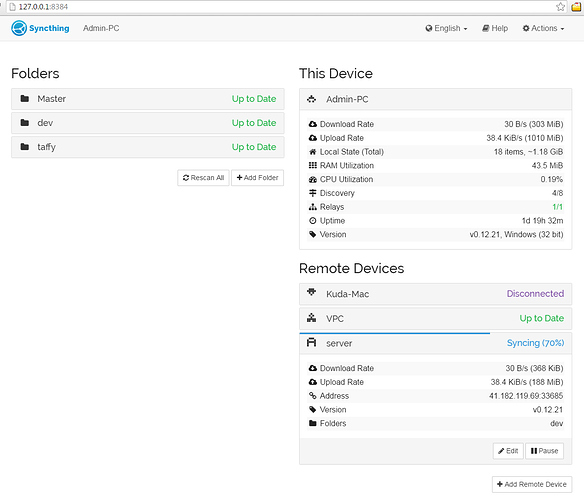 Does this mean i am on relaying. Do i have to disable it under settings?

No you are not using a relay.

From the screen shot I would suggest you have different ignores on one device to the others.

please explain this in a sentence.

i can see that under settings Enable Relaying is checked. is this OK?

Relaying being checked is not a problem. You are not connecting through a relay so leaving it enabled means it can be used as a fallback if one of your devices can’t manage to connect directly.

The folders on this device show as being in sync, what does it show on the other device?

Edit: Sorry, I may have miss read your original post. Does it make it to in sync if you leave it long enough?

here is the screenshot from the remote device, the one which is receiving the update 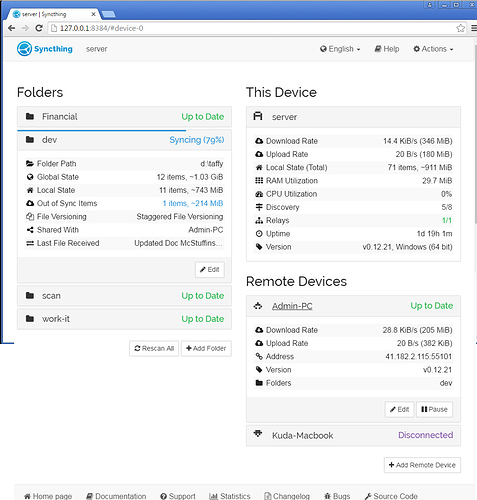 Yesterday i left it and evenetually it did sync and finished after some hours. which obviously defeats the whole purpose of syncing if it cant do it fast enough. As i speak now a 322MB file is still showing 70% on my local laptop but on remote device somwhere at 87%, it has been like this for a while now.

Any ideas will be greatly appreciated.

It is expected that it still shows 70% because only whole files are counted from that point of view. Not sure why the speed is so slow since both are at low CPU usage…

Which is the exact reason why i created this post… Slow speed noted for the past 2 days. Initially it was quite fast hence my great interest in syncthing.

Where do i find logs? maybe i check what is going on

It seems that one of your sides just has a fairly slow upload link. Also, are you sure rate limiting is not enabled?

Incoming and outgoung rate limit set to 0. is this OK

Hmmm. just thinking now what else could this be. As mentioned before, intial setup of syncthing had very fast speeds. I remember 1G file taking 8 minutes to sync between 2 computers but this was over LAN. But even after trying it between home and office (over WAN) i was happy with the speed. and now this?

Did the devices re-connect via their WAN connection at some point? That would explain your fast initial experience, then very slow speeds afterwards.

In your screenshots, I see IP addresses of 41.182.x.x which look to be on the Internet, rather than local.

thanks for the contribution. As explained above in one of the posts,initially tested the settings whilst the devices were connected to the same wifi in the same office. it was indeed fast and i was impressed with the speed as it took 6 or 7 minutes to transfer a 1.5 gig file to another machine. i then left office and went home after which i now connected over WAN. It was fast and the speed was just good. after say 24 - 48 hours, I then copy a file 500mb and it takes forever to finish. sometimes it looks stuck at 60, 78 0r even 98%. it will finish but practically if you were waiting for that file to sync so you can work on it, it wont work.the speed would be extremely slow. hope you get what im saying.