Out of memory crash while scanning

I have a folder that causes Syncthing to run out of memory and crash while scanning. Here are the facts:

As only significant difference of this folder are the very large single files, my working assumption is that this is the cause of the issue?

What else can I do to troubleshoot/workaround this?

Any advice much appreciated, Andrej 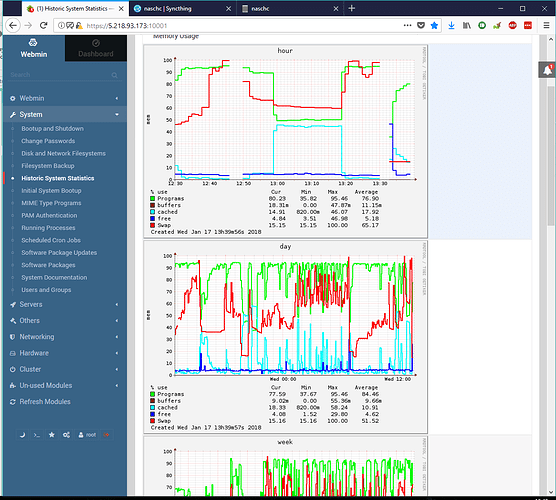 You can try setting scanProgressInterval to -1 but I doubt that will help. You could try setting GOGC env var to like 5, to trigger garbage collection more often. I guess you’d have to get a memory profile just before it crashes to understand where the space is going.

As only significant difference of this folder are the very large single files, my working assumption is that this is the cause of the issue?

Yes. The minimum thing we need to keep in RAM while scanning is the block list for the file currently being scanned. If the file is large, this can be a lot of memory. There is no workaround for that at the moment.

Is there a way to calculate how much RAM will block list need for a given file? At least approximately?

Only very approximately, unfortunately. For the block list itself in the first instance you can estimate 48 bytes per 128 KiB of file data. But then things happen:

The devil is in the different copies and stuff. How many of those happen and are allocated at the same time? Not sure. Count on several.

Many thanks for that; So for my 850GiB file, one instance of block list would be about 307 MiB. My guesstimate for “several” would therefore be 1GiB. OK, lets say 2.

I have 6.3 free/available before the scan starts, and ends with OOM crash.

Compared with 6.3GiB not being enough for Syncthing (how much would be enough? Dont know. Cant add more RAM to the NAS and cant add more swap to BTRFS)

More importantly - it seems that what I see is significantly different from what you described as expected. Is there a chance some of the “several” copies of block list is either created in error, or possibly not released appropriately?

Or is there a chance this scan process can be optimized? Perhaps by using file system/database instead of RAM?

I’m guessing that out of those you tested resilio is the only one with a block based approach. Dropbox can have very low memory usage but will probably upload and download the whole file on change, for example.

I don’t know how much memory will be enough. There are other factors like the number of connected devices acting as a multiplier on any if the things I mentioned above.

Optimizing things so that the whole block list for a file isn’t needed in RAM isn’t something that is likely to happen soon or possibly ever, unfortunately

I tested this with a 900 GB file to see what happens. The scanning process itself is consistent with expectations, with Syncthing self reporting a usage of 600 MB and the OS seeing slightly less but increasing during the scan (as memory is actually written to and not just allocated).

This goes on until the point it’s done and is going to commit the result to database.

That then results in a significant amount of allocations, peaking at 4.7 GB.

I’d say there’s room for improvement in this stage, but without making any promises as I don’t know how much of this happens inside the protobuf and database packages that are third party.

I recently added a PR that made this problem worse. Fixing this I found a lot ofa little headway to improve (two copies), I am writing a PR as I type this (well not literally, but almost

So something like this uses the same underlying array for all the blocks:

Yep. The fileinfo contains the block slice, copying the fileinfo just copies the blocks slice header. The code you show is a problem if you’re juggling a million files, but we don’t do that.

Well, I’ll file the PR anyway, because I also kill some lines

So if you consider it more/equal readable to the existing code, we might as well use it.

But then that sounds like it is really hard to duplicate that stuff in Go and thus it’s unlikely that we (as opposed to dependencies) are responsible for this memory peak.

Yeah while in block list form it’s probably fine, it’s when we serialize (copy), batch (copy), compress (copy), encrypt (copy), send (copy), etc it blows up I think. So in the database and protocol layers.

That sounds like an idea even I can understand

What is the chance of this happening in the near future?

Variable ? What do you mean ? Hand set by the user or automaticaly computed according the mean size of files handled (and memory available) ? Would that mean dynamicaly adapted ? Thanks.

I note that the above article is from Jul 2015 - has this task been assigned to anyone?

Any chance this feature could be implemented soon?

Not extremely likely, no. By itself it’s not super tricky, but there are corner cases and it’s a compatibility break with existing versions which is something we need to handle.

Sorry to hear that… it would seem a lot of modestly sized devices frequently used to handle data storage - which are a natural target for Syncthing - are not able to use it with larger files which are only going to become larger as time goes by.

At least this limitation should be visibly stated somewhere on the Syncthing website, so people with Raspbery Pi and home-grade NAS boxes dont waste days trying to make this work in vain.

Thanks for your help in clarifying this. Andrej