One folder stuck syncing, others with same settings are not

Folder X is hosted on a Linux desktop machine (device A) and is shared with two android devices (B and C). Folder Y is also hosted on A and is shared with B and C with the same settings. Devices B and C are stuck syncing X at 99% and have been for a couple of weeks now, despite the contents of X changing several times since then. However, both B and C are syncing changes with Y just perfectly.

The difference is about 2.5 MBs that B and C won’t sync. Scanning on A finds all the changes in X just fine. Rescanning on B and C doesn’t seem to do anything, as the last scan time is showing a couple of weeks ago on both, although at different times because the devices are not used constantly.

All three versions of syncthing are now 1.14.0. Device A was running a slightly older version that I then updated in an attempt to fix this issue. There are no ignore patterns set up, folders exist on all three devices and sync was working perfectly as expected until about three weeks ago on device C, about a week and a half on device B. A, B, and C are all on the same home network. No folder settings were changed before the sync issues began. X and Y are not subfolders of each other.

I’m new to syncthing issues, it’s always just worked for me, so I’m unfamiliar with what information may be needed. I’ll provide whatever is necessary. Thank you all.

There should be a list of files/dirs which are not in sync. Please check if those are actually in sync (like manually checking file mod. time/size). And if there’s anything special about those files.

I tried removing the offending shared folder from syncthing, and the local versions from B and C, then re-creating the file share and starting fresh. The only difference now seems to be the number of files that still will not sync. The files are not physically on B and C (admittedly I only checked a random sample, however, there’s thousands of files out of sync now), and on A there doesn’t seem to be anything “odd” about them, although I also don’t exactly know what I’m looking for. The files on A don’t appear to be corrupted, machine A can open the files just fine.

If something is missing from a device (A) on multiple other device, the “problematic” device is likely that one. As in it somehow doesn’t send the info about those files to the others. For further debugging info, you can query GET /rest/db/file — Syncthing v1 documentation for one of the files on all devices. To try and fix it without knowing what the problem was, start Syncthing once with -reset-deltas on device A.

Tried this suggestion. It didn’t seem to change the results at all.

I completely deleted both the folder and the contents on devices B and C, completely removed the sync folder from Syncthing, and then created a new folder share with the original files and location. I shared it first only with device C. It took over 48 hours to sync, but finally did, correctly. Then I added on sharing with device B, and after a couple of days of painfully slow syncing, device B has now stalled and doesn’t appear to be syncing anymore, nor is it completing scans of the folder. Over 7,000 items remain un-synced, and now device C isn’t syncing new files either.

Neither B nor C will sync with this troublesome folder, but still sync just fine with the other folders. It’s been about 24 hours now since the nuking operation, and neither B nor C has completed a scan of this one folder. Clearly it’s an issue with either the folder itself, or some particular file, but I don’t know how to go about diagnosing it. Could it be an issue of the folder’s size? It’s not a lot of data in a disk space sense, other synced folders in this setup are much larger, but this troubling folder consists mostly of a lot of very small files. The entire folder is about 575 MB but contains over 27,000 individual files.

And it hasn’t finished scanning?

Do the file counts match on all 3 sides?

Correct, neither device has finished scanning. Perhaps a limitation of the devices? They’re both Android devices (tablet and a phone). File counts on the “global state” do all match.

Also, you should check disk “busyness”. If syncthing database is on a spinning disk. Or if its reading from a spinning disk, this might be as good as you are going to get. 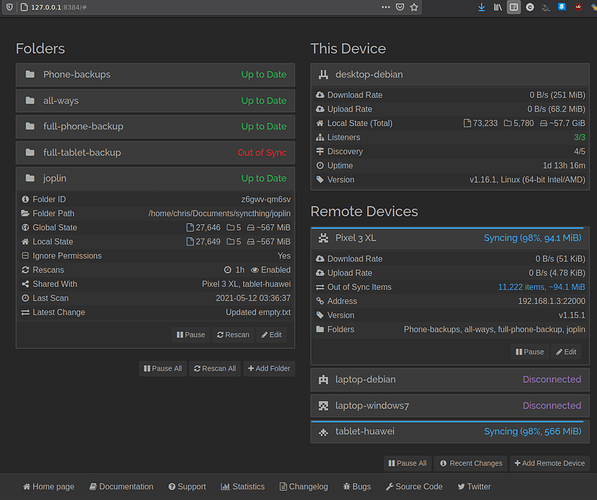 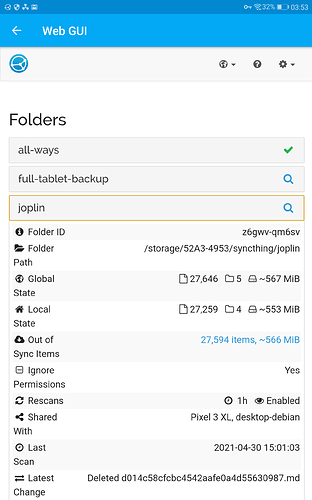 Device B shows it has never completed a scan, that’s the device where I uninstalled and reinstalled syncthing after nuking the database. Disk activity on device A is very light and system monitoring tools show very little of the activity from syncthing. It is a spinning drive, devices B and C are solid state.