New cases of “Out of sync” problem

Dear developers, I faced with a few new cases “Out of sync” problem. I have updated almost all my nodes up to version 1.17.0 and I expected that all of them will be in “Up to date” state. However, some strange things are happening that I try to describe below.

To clarify I add the rest request form the node B.

I forgot to note that at the same time all folders are in “Up to Date” state.

Just to have it mentioned: Indexes are resent on upgrade to v1.17.0. So temporarily it’s expected that remotes are shown as “syncing”. Apparently it’s not just temporary here, and indeed shouldn’t be (sigh).

The info shows a file that is ignored locally, and exists on a device IZ3E6JL. That alone doesn’t mean much: Can you please post screenshots of both the remote device and the folder from both devices where there is a discrepancy - thanks.

Bingo! Device A (IZ3E6JL) is Out of Sync. Some files are really absent but I can not understand why… It may be a bug of previous version or something else. But! From the side of the node B it does not matter if node A have some problems with the subfolder as node B do not want to download it. In fact, node A reports that the file is not available (see attached txt, the previous one was for the file which did not cause the problem, sorry).

Buy the way it does not explain the first case. 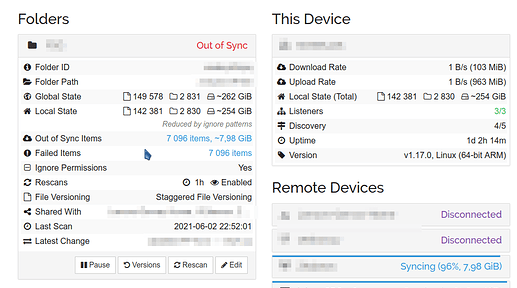 This is the screenshot to explain the first case form the device that was updated first: 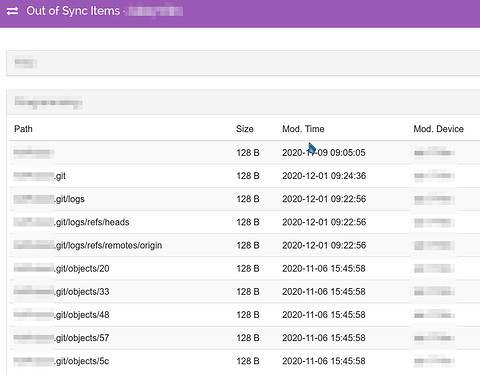 Dear Simon, Do you need some additional info for this case or you do not consider such cases as a bug?

You have a lot of failed items - what do the errors say there? (The screenshot you showed is the list of out-of-sync items, not of the errors, that’s the other link). Looking at the out-of-sync items I expect you ignored .git (good) and then deleted a parent directory on a remote. Now Syncthing should remove .git but can’t, because it’s ignored. See the (?d) prefix: Ignoring Files — Syncthing v1 documentation

Dear Simon, it seems I confuse you by mixing two different cases in one topic, I’m sorry for that. Let’s skip the case 2 with three nodes, I will try to reproduce it later in details.

Regarding the first case the situation is still the same. I have a lot out of sync items that seems to synced in fact…

Why A do not see the file on B while C see both nodes perfectly?

To be honestly “ignored” and “invalid” flags newer works correctly for folders.

The infos from the rest api are from different files, so I can’t actually compare them. Also I assume you are talking about remote out of sync only, not folders - full screenshots are always a good thing to answer such (and many other questions) automatically. And as there are ignored items included, please also specify the ignore patterns (e.g. the “distr” dir is ignored, while you say you have temp file ignores, etc).

and screenshots from the device A: 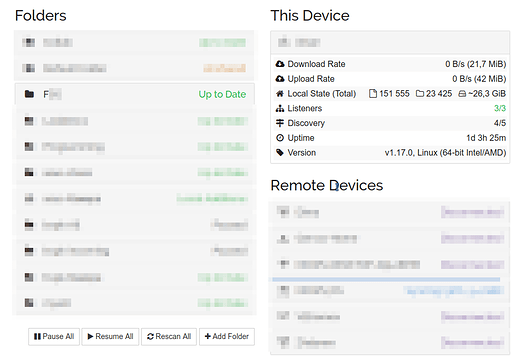 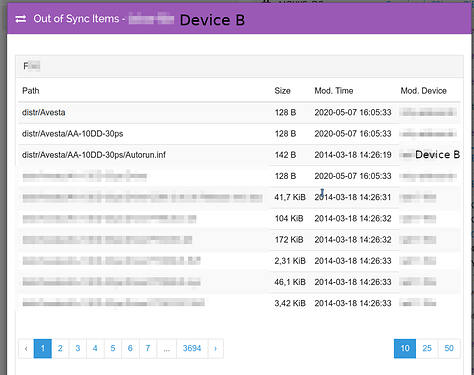 It all looks identical and well. That’s consistent with the missing indexes problems. We fixed a major cause of that in v1.17.0, which you are already on (pity). There has been another improvement in this area in v1.18.0, however I haven’t yet thought of a scenario where it can lead to such a problem that you experience.

In any case unless you can reproduce it and/or get model debug logging on it, there’s unfortunately no way to know how/why it happened.

To resolve the problem, it should be enough to start syncthing with --reset-deltas once on device A.

Dear Simon, This problem appears exactly after upgrading to v1.17.0… But, it’s possible that v1.17.0 just reveal the problem that was exist before. Anyway, I would not like to use --reset-deltas as I read some messages here that it resulted in uncontrolled file deletion and I hope that new fixes in v1.18.0 could resolve it smoothly.

At the same time I will try to reproduce this situation together with another one with ignored files as soon as I have a little time and three devices in one time. What kind of debug logging modules I should enable?

Anyway, I would not like to use --reset-deltas as I read some messages here that it resulted in uncontrolled file deletion and I hope that new fixes in v1.18.0 could resolve it smoothly.

Definitely not - --reset-deltas is totally save. It’s just “inefficient”, in that devices need to exchange all index info again. The index info itself is not touched by this option. A long time ago that was the default behaviour on every new connection

If you can reproduce it, logs with model,db debug logging would be good. However I do not advice to enable those facilities and “wait for a reproducer”. They are extremely verbose.

I have the same problem, it may have been caused by the 1.17.0 upgrade but I’m not sure, maybe I just didn’t notice it earlier. If I can help by sharing screenshots and/or logs, let me know. 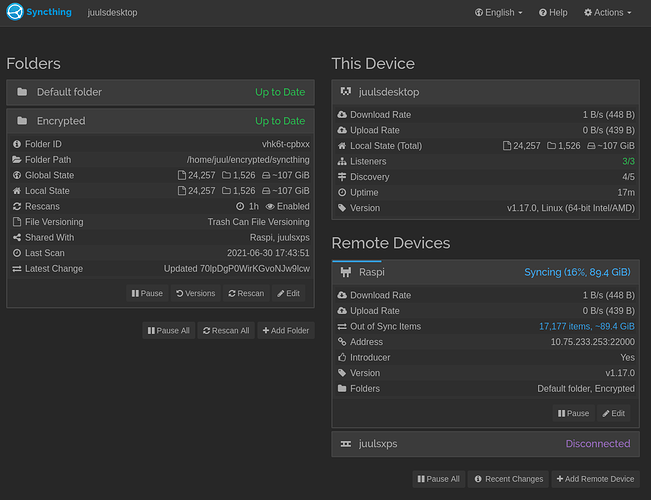 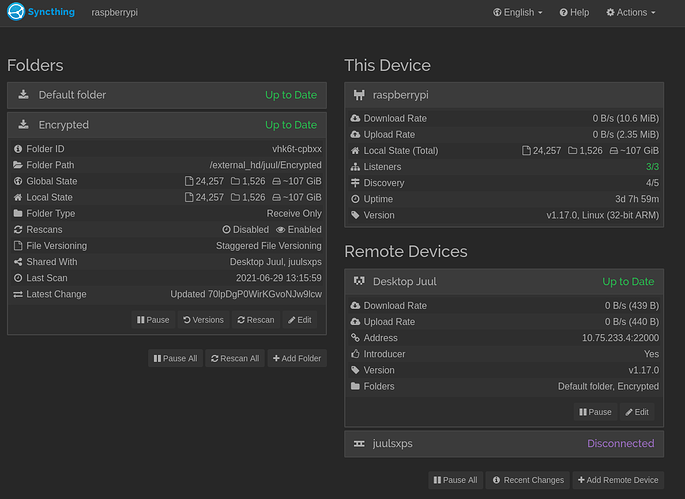 I can confirm that --reset-deltas on the device that reported the “out-of-sync” status solved the problem for me.