Hi, the source Syncthing reports all folders are in sync and that the remote system is 99% in sync with 13 items to go.

The destination Syncthing reports one folder out of sync with thirteen failed items, with the console saying hash mismatch.

I am at a loss. I have updated and upgraded both systems making sure they have the latest Syncthing. I have used the GUI to rescan the folder in question on both sides, and I have patiently waited some time now to see if the problem corrects itself.

I am new to Syncthing. The files in question were being edited via SMB and so possibly saw frequent changes over a short period of time, but they haven’t had any changes since… the various systems that did the SMB editing were totally rebooted and turned off at various points.

I’ve had this problem for a couple of days now and no improvement.

Suggestions as to what to try next?

If possible, could you post screenshots showing the errors as they appear in the Web GUI? Logfiles will be welcome too. 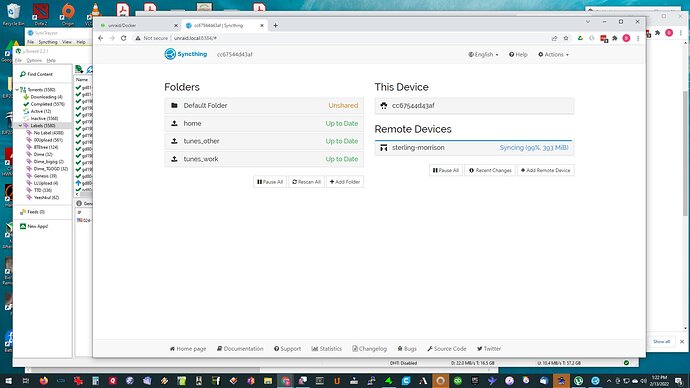 Note that when expanded, it shows that sterling-morrison needs 13 items.

Logs on that system (edited)

Here’s a screenshot of the destination Windows system 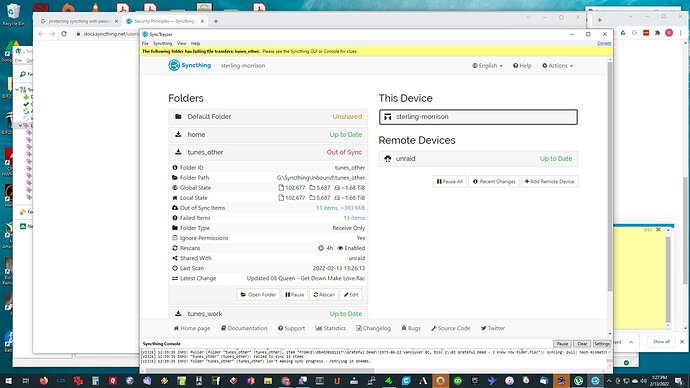 It shows thirteen failed items, here’s what happens when I click on that link 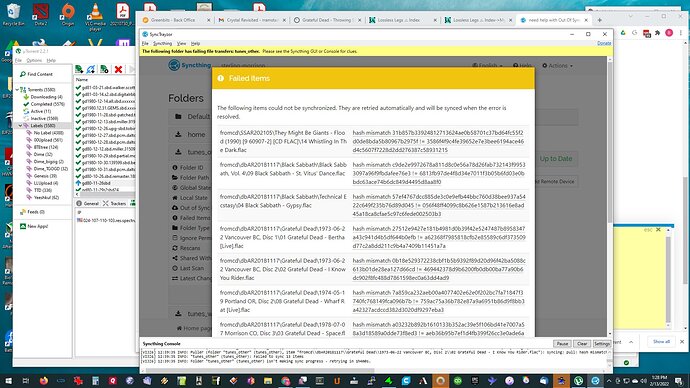 Please LMK your thoughts, thanks.

This is a weird one. I’ve personally never seen this particular error, and if you search for “hash mismatch” both on the forum and on Github, you’ll find mostly very old issues related to it. One possible clue is that the problem may happen with constantly changing files, but in your case, if I understand correctly, the errors keep popping up despite the files being static now.

I assume that restarting Syncthing, etc. hasn’t helped and the hardware isn’t faulty here. Is this correct?

Yeah, the various systems have been rebooted, shut down, had the Syncthing software updated (if appropriate), manually clicked on rescan, and so forth.

The destination is my personal desktop which gets a lot of use and hasn’t been problematic in the past. The source is a relatively new server but utilizing older hardware that was a desktop system and a server for a while.

Note that there’s a good amount of data on these systems, a couple of terabytes, and Syncthing was fine with keeping it all sorted for several weeks… plus quite a bit of it is FLAC audio files which have an internal fingerprint, so if there was corruption, I’d be able to tell, most likely. (the 13 failed files on the source all pass flac testing, haven’t checked to see if the destination is also OK)

Any solutions most welcome. I have considered these options:

Maybe there’s a middle ground of some sort, I am new to Syncthing, if there are some commands I could run on either side, or some settings to fiddle with, that would be great.

I then decided to try removing the folder configuration from the destination system, and re-adding it.

I confirmed that I wanted to add the folder and pointed the destination folder to the local storage.

The second problem was that the destination system gave me this warning:

Given that the destination was receive only, and the material was still on the source system, and that the destination seemed to still have the data in question, after reading around, I copied an empty .stfolder from one of my other shares into that directory and started a scan.

The destination system seems to be happily scanning right now and I’m hopeful this will be a solution.

I have ran into a third minor issue – the destination system seems to be claiming that there are some locally changed items – this isn’t likely as I don’t modify any of these files, ever, it’s just a copy of the source – using a file compare tool I can see that they aren’t changed in any way from the source – so I will most likely just let the sync finish, and if the sync works, and I don’t keep getting the “pull: hash mismatch” errors, I’ll make sure all the locally changed items are in fact identical and then Revert Local Changes, and the configuration should be fine.

Going forward I’ve told both systems to not instantly see changed files – I think this error was caused by a lot of changes being made on the source, and some of the copying activity to the destination being skipped somehow – the bug may also only occur when the source is in Send Only and the destination is Receive Only.

I don’t need near real time mirroring so it’s not a big deal to turn the watch feature off and let it sync every few hours.

So, that attempt didn’t work. The destination chugged away and eventually said I had 13 files with local changes – 26 files out of sync – listing each twice. I then did Revert Local Changes and the system did that, after giving me a warning, and then I got the same “pull: hash mismatch” errors on the same 13 files.

(for the curious, I know that some of these files are different on the source and that my theory is that the destination got very confused because the source was changing rapidly)

Fun stuff. Will repost if the newest attempt fails.

I think there must be some other factors too. The reason is that I myself have also been operating on files with rapid changes (e.g. virtual disks that undergo constant changes until the specific VM is shut down), yet I’ve never encountered these kind of issues.

Just a guess, but maybe Unraid and SMB are playing the role here.

I’m certainly willing to point the finger at SMB as the application in question that was modifying the files likes to open the files multiple times for reading with different file pointers and I do think that Syncthing may have gotten confused by that sort of access. (The application does a bunch of reading on multiple streams to the same file, then closes them, then opens one connection for writing and updates the file.)

That said, I do find it pretty frustrating that I can’t simply tell Syncthing to resolve the hash problems by flushing the destination hash cache and taking things from the source, or some other simple solution.

Right now I’ve blown away the folder configs on both sides, and am creating the folder config again on the source side, with a new folder identifier, and then will do the same on the destination side… at that point they should both have totally new hash data and shouldn’t complain.

It did work to blow away folder configs on both sides, create them again with a new folder identifier, and then allow them to sync, with one caveat. The destination complained that there were many locally changed items – not sure why, don’t really care – and I did a revert local changes, which then kicked off a scan.

Once that destination scan finished, everything was in sync and I was no longer getting errors.

As I mentioned, I think the source was changing so rapidly that the destination got confused. That’s the only explanation I can come up with. The files have internal checksums and they all pass on the source, so I know it’s not data corruption.

(I suppose it might have been some sort of strange networking problem, but that seems unlikely… I guess we’ll never know.)